Whatever be the answer, it is indeed a secret of unfathomable depth. 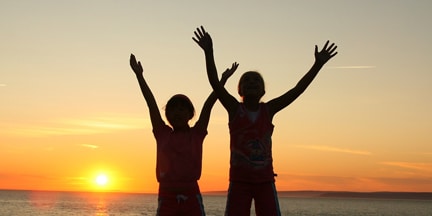 2. IS IT TRUE THAT MAN CONSISTS OF THREE PARTS, BODY, SOUL, AND SPIRIT?

Before me lies a book with the title, The Spirit World, by C. Larkin. The author says that man is a trinity, and is composed of body, soul, and spirit. He clears up what he means by giving us a diagram. Here are three concentric circles. The outer circle represents man’s body; the intermediate, his soul; the innermost or central circle, his spirit. Larkin’s proofs for the theory that man consists of three parts are the following: a. Man must be a trinity, for the God in whose image he was created is also a Trinity; b. the tabernacle had three parts corresponding to man’s body, soul, and spirit; and c. the mention of “your whole spirit, soul, and body” in I Thessalonians 5:23, and of “the dividing asunder of soul and spirit” in Hebrews 4:12. All this, he says, proves that man has indeed a spirit and a soul as well as a body.

Maybe you are wondering what this has to do with the Doctrine of the Last Things. You will soon discover the connection.

The doctrine of “the soul’s immortality” belongs to a discussion of the Last Things. But we shall never be able to enter upon that subject unless we know what is meant by the terms that are used. An illustration will make this clear. The other day a friend and I happened to be talking to a very learned and amiable brother in the Lord. He told us that he does not believe in the immortality of the soul. Now, if anyone makes such a startling statement in your presence, do not at once accuse him of gross heresy. It is always possible that the difference between your belief and his belief is mainly a matter of terminology. So it happened to be also in this case. At first we thought that his denial of the general proposition, “The human soul is immortal” resulted from the fact that he was using the term immortal in the strictly biblical sense. That, however, was not the case. It was his understanding of the meaning of the term soul that caused a preliminary misunderstanding. This man, just like Larkin, was a dichotomist, that is, a believer in the theory that man consists of three parts (over against the belief of the dichotomist, namely, that man consists of two parts). As he saw it, within the human personality the soul is that which imparts physical life to the body. When the body dies, the soul naturally dies along with it, just as does the soul of an animal at death. But the spirit survives!

However, nowhere does Scripture teach that man is composed of three parts. Read Genesis 2:7, and you will notice that in the story of man’s creation his twofold nature is clearly asserted. A long list of passages could be given to indicate that the inspired authors of the Bible were dichotomists. The list would include such passages as Ecclesiastes 12:7; Matthew 10:28; Romans 8:10; I Corinthians 5:5; 7:34; Colossians 2:5; and Hebrews 12:9. The fact that man was created in the image of God, if pressed as proof for the trichotomist theory, would lead one to the foolish conclusion that man, as well as God, consists of three persons. Reference to the tabernacle with its three divisions is certainly far-fetched. As to I Thessalonians 5:23, here the terms spirit, soul, and body must not be added up, as if spirit and soul were two separate entities. For a translation and interpretation of that passage see my Commentary on I and II Thessalonians, pp. 141, 146–150. Besides, everywhere else Paul clearly refers to the human personality as consisting of two parts. And as to Hebrews 4:12, Prof. Berkhof states, “Hebrews 4:12 should not be taken to mean that the word of God, penetrating to the inner man, makes a separation between his soul and his spirit…but simply as declaring that it brings about a separation in both between the thoughts and intents of the heart” (Systematic Theology, p. 195).

Both terms refer to that part of the human personality which is immaterial and invisible. There is only one such element, even though at least two names are given to it. Now, it is true that when the Bible is referring to that immaterial element in its relation to the body, to bodily processes and sensations, and in fact to this entire earthly life, with its feelings, affections, likes and dislikes, it generally employs the term soul (psuche); for example, “The Jews stirred up the souls of the Gentiles” (Acts 14:2). It is also true that when the reference is to the same immaterial element considered as the object of God’s grace and as the subject of worship, the term spirit (pneuma) is used most frequently (always in Paul when that meaning is intended); for example, “My spirit prays” (I Corinthians 14:14). But the matter is by no means as simple as that. In several instances the two terms soul and Spirit are used interchangeably, with no (or very slight) difference in connotation. Let me give one clear example. It is Luke 1:46, 47: “My soul (psuche) magnifies the Lord, And my spirit (pneuma ) rejoices in God my Savior.”

And this is only one of several examples that could be given. The conclusion, therefore, is this: “When you are talking about man’s invisible and immaterial element, you have a perfect right to call it either soul or spirit. And if anyone, in speaking to you, should maintain that man’s soul is necessarily his lower immaterial substance, not nearly as valuable as his spirit, you might ask him whether he does not believe in soul-winning, whether he does not believe that his soul is saved, and whether he also does not agree that it were better for a man to forfeit the whole world and not lose his soul. When you have made your point clear, suggest to him that he and you sing the hymn, “O my soul, bless thou Jehovah!” (Psalm 103).

1. What is a dichotomist and what is a trichotomisf?

2. Prove that according to the Bible man consists of two-not three-parts.

3. In the Bible, does the word soul always have a different meaning than the word spirit?

4. In Scripture, when soul has one meaning and Spirit another, do these two words then indicate two different, immaterial substances dwelling in man? What is the distinctive meaning of each term in cases in which a distinct meaning must be ascribed to each?

5. What has all this to do with the Doctrine of the last Things?

1. You have been studying that riddle with which the present Outline begins. What is your answer?

2. Those who are always referring to I Thessalonians 5:23 and Hebrews 4:12, to prove that the authors of the Bible divided the human personality into three parts, are committing a basic error in Bible-interpretation. What basic rule of interpretation are they forgetting?

3. What do you think of this argument against the position of the trichotomists: If man consisted of three parts, he would be able to feel or sense all three!

4. Does Scripture urge us to be soul-winners? Refer to some passages if you are able to do so.