During my ministry I have been keeping records of counseling interviews. The earlier records, I must confess, are sketchy and the notations in many instances lack insight and understanding. In more recent years the memoranda have been more complete and the observations have profited from reading and study as well as from the earlier mistakes and misjudgments. Not so long ago I went through some of these counseling files. I did so partly because that is routine with me, and partly because I knew I had to prepare this article. I was surprised at the large number of interviews—particularly the past ten years—in which I was confronted with a boy or a girl who suffered from having a bad father.

What do I mean by a bad father? Not necessarily a wicked man. There have been such, of course. There is the record of one case where a father habitually molested his daughter, a teen-age girl with a low I.Q. That case puzzled me, and one day, traveling home from Detroit with a psychiatrist, I mentioned this girl’s plight and was surprised to learn that the week previous at a convention of psychiatrists in Detroit a paper had been read in which the lecturer argued that fathers who molest their daughters often do so with the tacit consent of the mother. That left me still more puzzled.

There are the run-of-the-mill wicked fathers who follow the familiar course of drinkers. They beat up their wives, abuse their children, and practice all kinds of infidelities. I never cease marveling at the mothers who tolerate all this and remain with their husbands. One of them said to me a fortnight ago, “I still love him!” She is a faithful, home-keeping wife who has a philandering husband that shows her snapshots of the women he dates.

The bad fathers I have particularly in mind in this article are not bad men as such. They are morally good men, respectable citizens and neighbors, usually good providers and regular in church-attendance. Let me briefly classify them and describe their failings.

He may be a professional man who for one reason or another allows his profession to cut into the time he should be giving to his family. Some of these men are strangely inconsistent. They plead their crowded schedules as an excuse for the neglect of their families. Yet they have no difficulty rearranging their schedules to accommodate their travel plans. And in a good many instances their families cannot enjoy the trips with them. No one will dispute that there are professional conferences and conventions where attendance is not only profitable but in some instances obligatory. And everyone understands that these gatherings necessitate travel. But the fact remains that there are professional men who manage to arrange for these journeys but cannot arrange leisure time with their families at home. 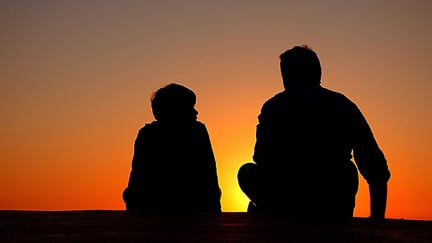 Not a few pastors are among the greatest offenders here. They are guilty of excessive participation in conferences, conventions, board activities, committee meetings, etc. And all at the expense of their home life. There are relatively few city parsonages where one can find the pattern of family life given us in Deuteronomy 6:7. I recall an installation reception I once attended at the close of which the new pastor was asked to make a few remarks. One thing he said I have never forgotten: “Please do not phone the parsonage on Saturday evenings unless it is absolutely necessary. That is the one night in the week we all are home, and I am busy in my study.” Alas! How true! Only one night in the week the family is home, and even then father is not with them. He must be in his study.

When a father, whatever his profession or trade, is too busy to enjoy social pleasantries with his family and to receive the confidences of his growing children, he is altogether too busy. No responsibilities outside the home should be allowed to isolate him from his dear ones. Those who beget children owe them more than a living, however luxurious that living may be.

Here we have the silent kind. Reasons for this silence are many. There are fathers who are dead tired when they return home from work. III health or a constitutional weakness may be responsible for the depletion of their vigor at the end of the day. Or it may be that their work is extremely difficult and demanding. They have our sympathy and their families should be considerate. They deserve kindness and thoughtfulness from their children. I have often been appalled at the heartlessness of children who have no respect for the lines of toil and care on their father’s face, for the look of anxiety in his eye, and for stooped shoulders that betray a weakening physique. And when such a man has a socialite wife who insists that he spend nearly every evening away from home with her, he is to be thrice pitied.

But not all silent fathers are in that classification. What I have in mind here is the needlessly pre-occupied father, or what is worse, the indifferent, selfish father. He is the fellow who can’t be bothered with the kids. He buries himself behind the newspaper, and hasn’t a word for his family. When his children rehearse the day’s happenings—and how children love to do that!—he is not interested.

When they seek advice from him, he sends them to their mother. She must be both father and mother. The prattle of the little ones disturbs him. The sooner they get to bed, the better. The older children leave the house for the evening’s events, and he barely notices then departure. His wife has learned to keep silent. She knows the price of peace in her home—leave dad alone!

It is not surprising that children in such a home become detached from their father. They never get to know him, and he never becomes acquainted with them. Only last evening, a young married man and his wife sat in my home and poured out a tale of marital woe—first the man and then his heartbroken wife, who wonders whether she should remain with him. As I sat between the crossfire of accusations, it became apparent that the man had emotional problems of the kind that often are rooted in childhood experiences back home. At an opportune paint in the conversation I hazarded the question: “How close were you as a boy to your father?” His reply came slowly and reluctantly: “Dad seldom had anything to do with my sister and me. He took no notice of us. To this day I do not know my dad.”

Yes, there are fathers like that. Too many of them! They live complacently within themselves. Some of them are positively garrulous away from home. But in their own dwelling they are as an island away from the mainland of their family life. It is a form of desertion and should be branded as such!

Perhaps something went wrong when he was weaned. An overindulgent mother may be back of his immatureness. He never grew up in the full sense of the term. A strange unfilledness characterizes him. He wants lots of attention, much to the disgust of his children who cannot understand why he acts the way he does. He complains about his work, demands all kinds of assistance about the house, and acts like the most abused person in the community. His wife must layout his socks for him, select his necktie, and rub his sore back. It never occurs to him that his wife’s backache may be more severe. Most of the bottles in the medicine chest are for him. Since nothing is quite so distressing as what he must endure, the cares of his family little concern him. He whimpers for himself. Is it any wonder that the children draw away from him?

Psychologically, this is dangerous. The immature man sometimes seeks a satisfaction for his unfilledness in alcohol, gambling, and even marital infidelity. His irresponsibility can lead him into associations whose end results bring all kinds of grief and shame to himself and his family. Back of much of the alcoholism we witness today is one word-Immaturity.

These are hard cases to handle. I have one on my hands right now. His wife has left him twice. There is no stock solution that covers them all. But with some of them I occasionally feel like suggesting to the wife that she send her husband back to his mother with this note pinned on his trousers:

I have tried for several years to help your son grew up, but with no success. Please take him back for a spell and see whether you and his father can complete what you both left unfinished. He eats anything, provided it’s like you used to fix it.