Sometime during the Christian School convention that was held some time ago, someone, I don’t recall who, asked the above question and thereby stirred up a rather animated set of responses. The question was, who is teaching Reformed doctrine to our children? The answer, I am afraid, at least in most of our so-called “Reformed communities,” is: NO ONE!

Decades ago, when I was still a student at the high school and college levels, there were required courses that we dubbed with the title “Ref Doc,” an abbreviation for Reformed Doctrine. Our schools and our churches were unashamedly Reformed. They required, as a matter of course, that we come to understand, appreciate, and commit to the Reformed faith. Itwas articulated for us in the Heidelberg Catechism, the Belgic Confession, the Canons of Dort, the Westminster Standards, and the writings of sundry Calvinists.

Sometime during the last thirty years the Reformed character of our communities has subtly, effectively changed. Now it is difficult to find a community that is unabashedly and deliberately committed to the Reformed standards. Now it is difficult to find teachers in our Christian schools, and officers in our church councils, who know in substantive ways what it means to be Reformed or what is distinctive about historic Calvinism. Our schools and churches are still unashamedly Christian, but there seems to have crept in a generic brand of Evangelicalism, speaking animatedly about outreach and missions, while becoming more and more shallow in its understanding of and appreciation for doctrine.

There is in many quarters a hyper-kinetic effort at bringing people into the church, while there is at the same time a decreasing tendency to be concerned about the doctrines and the teaching of the church. There is a steady and gradual erosion away from the Reformed faith, with more and more young families embracing Arminianism, ecumenism, and pentecostalism.

This shift hit home recently while I was making a hospital call on a widowed octogenarian. During my visit, inwalked an attractive middle-aged niece of this dear saint, complete with an obviously Dutch name and roots in South Holland, Illinois, a bastion of Calvinism if ever there was one. When I inquired about family connections and church affiliation, I was surprised to hear her proudly proclaim membership in a large Baptist church. Adult-only baptism, Arminian theology, altar calls, and a practiced disdain for Calvin’s teachings had all apparently been exchanged for the faith in which she and her husband had been reared. Their children, too, six in all, were now “baptists.” Was there no discernment when they had made the switch? Had they knowingly rejected the TULIP, or had they never learned it?

Some of this theological shifting may have come about with the best of intentions. This particular lady expressed an unwillingness to put up with “all the theological quarreling” that she had heard in the CRC. Why couldn’t people just love God and love their neighbors? Why could they not be about “the only business that really mattered,” the bringing of lost souls to the Savior? Such arguments may seem to be pious enough on the surface, but they really betray a serious misunderstanding of the Biblical message. Such folks have really reduced the faith to a simple creed: “Love God and your neighbor too.” Such superficiality will not long endure in the heat of Satan’s attacks and should be replaced with the whole armor of God.

All of this has happened, I fear, because no one of late has been willing to require, and no one has been prepared to teach, courses in Reformed doctrine. Christian Schools International members, often with the noblest of intentions, have been trying to share the wonders of Christian education with all of their evangelical neighbors, all the while claiming that they had something wonderful to offer, but skimming off the Reformed distinctives for fear of offending the Baptists, the Pentecostals, the Greek Orthodox, and the Nazarenes who had come to join them. At the CSI convention recently many of the principals and board members insisted that their schools would not be willing to require courses in Reformed doctrine for fear of offending their new constituencies. 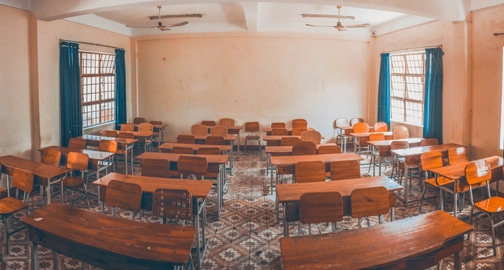 Lest we accuse only the elementary and secondary schools of this error, it is well to remember that the same mentality has permeated our Christian colleges. In the years that I served at Trinity Christian College I made a very pointed effort to inform each new student entering our program that I would unashamedly press on them a Reformed, Calvinistic perspective in all my courses. They needed to know that up front, for integrity demanded no less. If they did not want to hear a Calvinistic perspective, complete with all the trappings of divine sovereignty, divine election and total depravity, they ought to look elsewhere before paying their tuition. A few persons chose not to come, but most appreciated knowing exactly what was going to be served.

I, of course, am not alone in such insistence, for the Missouri Synod Lutheran Schools are equally up front about the religious perspective that they promote in their schools. So, too, are most of the Roman Catholics, the Baptists, and the Pentecostals. It seems as though the Reformed are the only ones who appear to be ashamed of their heritage, and who want, instead, to adopt some form of generic, muted Evangelicalism! Must it be said that the Reformed Christian schools are no longer Reformed? Do they no longer know where they stand?

Is the Reformed faith a dying breed? Is the passing of The Reformed Journal a few years ago a significant symptom? Is the gradual and widespread shrinkage of Reformation rallies a sign of impending death?

If the answer of the above questions is “Yes,” who, then, will pass on the Reformed heritage to our children and grandchildren? Will the church take on the task? Or is the church too busy providing bandages for hurting singles, abused women, the homeless, the physically unfit, and fun for the entertainment seekers? Is the church so busy teaching single’s survival techniques, canoeing skills, aerobics, evangelism skills and softball 303, that it no longer has time for Reformed doctrine? Have churches allowed their priorities to get bent out of shape? Will churches that have rejected the tenets of Calvinism now suddenly return to their theological roots? I hope so, but I fear not.