This is a replica of the badge which permitted one to be an observer at the White House Conference on Education recently held in Washington D.C. In this capacity John Vander Ark and I, representing the National Union of Christian Schools, were privileged to attend the conference which arrested the attention of the nation as it marked the culmination of the most extensive stocktaking of education in history. Our appointment as observers admitted us to all the general sessions but it did not admit us to the round table conference sessions where the answers to the six major questions on the conference agenda were formulated. These sessions were reserved for participants and members of the press. 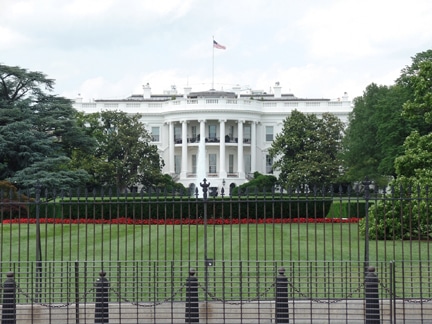 Attendance at this historic conference gives one an opportunity to feel the throb of America’s heart. Even though I was limited to the privileges of an observer, I had all kinds of impressions. Let me tell you about a few of them.

In discussing the basis and program of Christian Education with delegates of the conference at the ever-flowing coke machine I was confirmed. anew of the secularization of public education, One individual looked at me as though I were talking in a foreign tongue; he could not understand what I was saying. It’s no wonder. The list of objectives for education given in the conference report on the question “What Should Our Schools Accomplish?” comes no closer to a reference to God than the statement that schools should continue to develop “ethical behavior based on a sense of moral and spiritual values.”

Non-public education did receive some attention at the conference. The 34-member planning committee had a representative from the Catholic church. Two comments in the conference speeches indicated the need for co-operation between public and private schools. The third comment on nonpublic education is given in the report on the question “How Can We Finance Our Schools – Build and Operate Them?” It admitted that “the non-public schools were probably having financial difficulties in meeting their needs;” it “recognized the right of parents to educate their children in non-public schools;” but it “did not favor the use of tax funds for support of nonpublic educational institutions.” This brief summary impresses me that non-public education had place at the conference, but not a very big one.

The widely heralded notion that there is a growing interest in religious exercises in meetings of government bodies must not be taken too seriously. Three prayers were read in the conference program by representatives of the Protestant, Catholic, and Jewish faiths. Though phrased in beautiful language not one of the prayers was offered in Christ’s name. That many of the members on the platform did not have their eyes closed did not surprise me, but I surely expected their position to be that of respect and reverence, Instead they appeared unconcerned and uninterested. It seemed to me that many tolerated prayer as a nicety and a ritual of little value. Prayer is mockery when there is no faith in its power.

Delegates at the conference oozed with the confidence that if enough people talk about the problems in education the right answers will surely come. And how does one know that the answers are right? When the majority of the people believe that they are. Americans have great faith in fellow Americans.

The spirit of toleration and compromise was also in the air. William Carr, executive secretary of the National Education Association, expressed this clearly, albeit in fun, when a member of his group suggested that a phrase in the report they were drafting would be repetitious. He said “If we can agree and be repetitious, let’s do it by all means.” In such an atmosphere it is all right to have convictions and to let them be known, but they must not be so strong that they obstruct compromise. When “let’s all be good fellows” has a premium, distinctiveness gets no place.

Politics had a major role in the White House Conference. In addition to the many Congressmen there were at least twenty governors among the delegates, The explosive issue of federal aid to education constantly threatened to overshadow all the items on the program. There were charges that the conference had been “stacked” with opponents of federal aid. Conference officials consistently denied these charges. Labor delegates, pushing for federal aid, met behind closed doors to review conference progress, Governor G. Mennen Williams, a Michigan delegate to the Conference, put in a well-timed plug for federal aid in an address before the Woman’s National Democratic Club. Because of the 2-to-l clamor for federal aid for school construction administration forces were prodded into the promise of “a broadened and improved program of federal assistance to help erase the classroom deficit.” Congress will find it politically practical to approve school construction aid.

The smooth and efficient handling of the huge crowd (1800 delegates, 500 newsmen, and numerous observers) was a wonder to behold. This was not a conference where a few worked and the rest watched and listened. Every participant had an arduous schedule. After each question was analyzed in a general session it was examined in four two-hour rounds of discussion with a gradual decrease in the number ·of participants per round until a concensus report was made and presented to a general meeting. This proved to be an excellent way of getting a large group to concentrate on the items on the agenda. But an obvious weakness in this type of meeting is that new ideas get filtered out long before the formulation of the final report. It is as one participant said “By the time the thinking had been distilled down to two final chairmen…it has become so refined there’s no life left in it.”

It thrilled me to see the wonder and fascination of the many foreign observers that were invited to attend the White House Conference. It was my privilege to speak to visitors from The Netherlands, Switzerland, Finland, Brazil, and a Buddhist monk from Cambadia. Many of them were here on an exchange basis studying “American Civilization.” Democracy was on display and the foreign observes made a very receptive audience.

It would not be fair to measure the success of the conference in terms of the reports on the six discussion questions. These reports have some value but they contain little that is new. The publicity that the conference gave to the problem in education outweighs any other accomplishment. This meeting had the largest press corps on record for an education conference. Delegates were leaders in many walks of life. These delegates and the press will continue to alert America to its educational needs as they talk and write about the momentous White House Conference on Education.