“Without doubt the most perplexing and crucial social, moral, and religious issue in America today is the problem of racial segregation. This divisive controversy has been with us for a long time, but matters have been recently brought to a head by the legal judgment of the Supreme Court in 1954.” So wrote the editor of Theology Today (July, 1957). Other editors share this opinion because numerous articles and symposia have appeared in recent religious journals. We shall indicate what they are thinking by quoting from a cross section of the spokesmen.

M. Stirewalt, Jr. (Professor of Religion in Lenoir Hhyne College, Hickory, North Carolina) believes that underlying the complex historical, social, psychological and moral factors in the race problems of the South is “basically a neglect of the Scriptures.” “It is our contention,” says Dr. Stirewalt, “that the Scriptures are not being widely studied for the discovery of principles and directives by which to meet the present crisis, and therefore the Church is weakened in her witness to the world.” By reference to numerous historical and contemporary situations, he illustrates his theme “that the church at the level of the congregation is reflecting society rather than infecting society.” He asserts that when the Church neglects Scripture one can expect no more from the congregation than from a good civic club in dealing with basic ethical issues. (The Lutheran Quarterly, August, 1957, pp. 255, 257, 258). 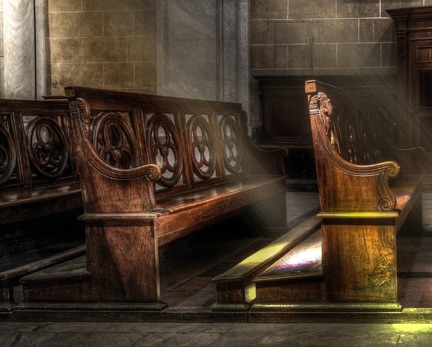 The history of the Negro’s status in this country is interestingly traced by George D. Kelsey, himself a Negro (Professor of Christian Ethics at Drew Theological Seminary). In the light of this survey Dr. Kelsey concludes that what is taking place in American race relations today is nothing short of an “ethico-cultural revolution.” “Underlying the changes in status and role is the application of thc democratic concept of ‘person’ to the Negro. The pattern of race relations in America has rested on two sociological doctrines—the ‘separate but equal’ doctrine, and the doctrine of ‘equality of opportunity.’ The ‘separate but equal’ doctrine is now being called into question…It is not generally recognized, however, that the doctrine of ‘equality of opportunity,’ as traditionally applied, is also a fallacious doctrine…Many people are unaware that this doctrine is implicitly under attack in contemporary Federal and Judicial circles…” Dr. Kelsey goes on to assert that “the astounding thing is the fact that the churches have never subjected this doctrine to theological scrutiny.” He regards it as “astounding” because the doctrine of “equality of opportunity” applied to race, neglects “the Christian doctrine of the person” and indicates a lack of awareness of “the mental-spiritual aspects of life.” He regards the Supreme Court decision of 1954 as the “establishment of a new philosophical foundation for race relations” which “provides the churches with an excellent opportunity; but, at the same time, it deepens their responsibility.” (Religion in Life, Summer, 1957, pp. 341–344; cf. other articles on race relations in same issue.)

Another writer contrasts the Samson-motif with the Jesus-motif to explain the racial problem of the South. Rachel Henderlite (Professor of Applied Christianity and Christian Nurture, General Assembly’s Training School for Lay Workers, Richmond, Virginia) thinks the South is like Samson in its willingness to destroy itself in order to destroy the enemy. “In both instances,” she says, “there is limited understanding of God, albeit a frenetic zeal. This is a level of desperation one dreads to see. It represents despair and violent, unreasoning resistance—a human response at the opposite pole from the courage manifested by Jesus Christ, who was willing to destroy himself in order that his enemy might live.”

Professor Henderlite agrees with Prof. Kelsey that “the question of equality is not a proper question for the Christian to consider. The central principle of Christianity,” she says, “is counting other better than one’s self, the strong giving himself for the sake of the weak.” Professor Henderlite goes on to indicate an interesting point with a warning parallel. ‘“Perhaps a strange and yet undeniable fact should be pointed out here as part of the complexity of our situation. It is love, albeit, a mistaken love, that prompts much of the conflict that has arisen in the South in recent months. It is not hatred of the Negro that stirs to violence….It is not even pride of race that is primarily impulse to violent action, but love,—love of family, loyalty to community…. When these things are endangered by strange and perhaps uncontrollable factors, our love and loyalty cause us to spring to their defense and lead us into violent behavior that surprises even ourselves.” She notes that such factors have often proved disastrous in history as, for example, in Germany under Hitler. (Theology Today, July, 1957, pp. 195–200).

The Anglican Bishop of Johannesburg, South Africa, recently visited the United States. The attitude of the South African government makes the problem of racial segregation more acute for the church. Bishop R.A. Reeves declares that “churchmen may not be able to do much as churchmen to influence the pattern of community life in South African society at the present time.” But he adds that “as a church we can refuse resolutely to allow those in authority to impose their heretical dogma of racial sectarianism union the life of the church.”

Bishop Reeves believes that “the basic issue in South Africa has become a theological issue.” Therefore he asserts that “the church’s opposition is not political but theological.” Bishop Reeves then concludes: “I believe churchmen everywhere, all through the world, ought to realize that the magnificent assertion of St. Paul, that in the church there cannot be Greek and Jew, circumcised and uncircumcised, barbarian, Scythian, bondman, freeman, but Christ is all, and in all: has now become the most burning political issue in South Africa.” (The Christian Century, August 7, 1957, p. 938).

The various quotations above indicate something of the attempt of religious leaders to wrestle with the critical problems of racial segregation. Although there is a laudable attempt to deal with the question in a Christian way, it is obvious that the light of Scripture is not uniformly nor clearly reflected. There is frequently a fuzziness and an emotional extremism involved. Something of this is indicated in the issue of Theology Today from which quotation was made above. In this issue, which carries a symposium on racial segregation, E.G. Homrighausen in his department “The Church in the World” refers to some of the more newsworthy threats to liberty cited by the National Council of Churches in the United States. Along with references to genuine threats such as racial segregation, etc. mention is made of tax funds and bus rides for children of parochial and private schools. Here certain statements made by the National Council seem to indicate that an end to segregation would involve, ideally, an end to parochial and private schools as well. It is difficult to understand how the spokesmen for such ecclesiastical agencies can fail to make certain fundamental distinctions. Many Protestants (usually liberal) seem to identify democracy and equality with a certain uniformity which is but another form of tyranny.

It was “a rash moment” says Reinhold Niebuhr, when he wrote an article on Billy Graham for Life magazine. After that article a deluge of letters (250) from disturbed readers flooded Niebuhr. He now replies by saying that it was not so much Graham whom he meant to criticize as the official Protestantism which was willing to support the pietistic evangelism of Graham’s campaign in New York City. Niebuhr indicates his belief that “American Protestantism has been engulfed by uncritical religiosity in the so-called revival of religion” in which he fears “a wave of fundamentalism and biblicism [which] threatens to undo the discriminations of a century and make the Christian faith unavailable” for discerning young people.

Niebuhr seems to sense a distinction between fundamentalism and Calvinism. Using the distinction of Will Herberg he refers to scholastic and pietistic fundamentalists. “‘Scholastic fundamentalism’—usually of Calvinistic origin—may sometimes be graceless in its polemical mood,” states Niebuhr, “but it is at least conscious of all the hard realities of life. But pietistic fundamentalism combines the naivete of literalism with the simplicity of the old liberalism. It solves all problems of life by asking bad people to become good and to prove it by living with one another.” In this connection Niebuhr seems to think the main thing in the Reformation was simply the recognition that even the believer is still a sinner. “The Reformation was in essence the restoration of that part of the gospel which had been obscured by the moral pretensions of the medieval church and which is now threatened by this sectarian pietism.” And so the Niebuhr-Graham debate goes on. (The Christian Century, Sept. 4, 1957, pp. 1034–1035).

Some provocative comments concerning fundamentalism are made in a review of Carnell’s new book Christian Commitment: An Apologetic. The reviewer, William Hordem (Professor of Systematic Theology at Garrett Biblical Institute) shares Niebuhr’s uneasiness concerning the signs of “revival of fundamentalism” in America today. Nevertheless, he notes that “no liberal puts his faith more thoroughly to the test of reason and experience” than does Carnell. From a study of this “important book,” the reviewer asserts that “it would seem that the time is ripe for a creative conversation with theological conservatism that would transcend completely the impasse of the old fundamentalist-modernist debate.” But the following is his provocative conclusion: “And yet, as I put down Carnell’s book, I was haunted with a paradoxical suspIcion. Could it be, that the errors of earlier modernism, such as overconfidence in man’s goodness and rationality and an uncritical view of the immanence of God, are going to be brought back by the new fundamentalists.” (The Christian Century, Sept. 4, 1957, p. 1042).

Markus Barth, (Associate Professor of New Testament at the University of Chicago) has written a helpful article entitled “Introduction to Demythologizing.” He notes that “classical liberalism was a busy demythologizer. The way in which this art was performed was very simple: all Bible passages suspect of myth were, with more or less noise, omitted from preaching. Elimination was the old the program of church teaching and way of demythologization. .. But Bultmann is looking for a new path in the old park,” says Markus. “His slogan is ‘not elimination but interpretation: …By ‘interpretation’ of the mythological elements he promises not only to keep together the wholeness of the Bible but to produce the gospel in meaningful form for modern man.

Critics of Bultmann (F. Burri and Karl Jaspers, e.g.) have noted the inconsistency in his demythologization. Markus Barth admits that there is a basic inconsistency in Bultmann’s system but adds that “it is precisely this contradiction or incongruity which reveals that he is a real theologian—a man who, despite his reason and knowledge and creative power acknowledges himself to be fundamentally disturbed, limited, checked and inspired by Somebody who is beyond man’s control, definition, and sophistication and by a deed which never can be fully explained, mastered or communicated by the sale thoughts and words of man. Bultmann has to be heard and discussed as a Christian scholar and as a teacher of t11e church, not in spite of but just because of, his inconsistency.” It seems that Markus is somewhat milder in his Critique of Bultmann than is his father Karl. (The Journal of Religion, July, 1957, pp. 145–155. cf. another article on Bultmann in the same issue by Shubert M. Ogden).