What is Gnosticism? A great question for a Bible study, seminary exam, or discussion with fellow ministers. I can remember studying about it in seminary, but I must confess I had a difficult time getting a handle on this heresy that plagued the early church. I read and heard how it had something to do with “knowledge” (gnosis) and the claims that false teachers had superior insights and revelations from “angels” or other beings. Gnosticism also produced erroneous views about the body, namely that the material world was evil (matter is evil -Greek) and since body belonged to the material-world, the body was evil. Therefore it didn’t really matter what one did with the body. Likewise, against the cultural religious background of the early church with its pagan festivals, Greek and Roman deities seemed to be so distant from what American Christians experience. The fact is however, that much of what the early church faced in the heresy of Gnosticism is plaguing the church today. It has a new name; it is called the New Age movement. Peter Jones does a remarkable job of showing how the New Age movement is really the old Gnostic heresy revisiting the world and the church, but with stronger force!

WHAT IS THE NEW AGE?

Jones himself says that it is very difficult to “pin down” a definition of the New Age. He likens it to a “slippery eel”. It successfully disguises itself with its tolerant, soft-sell promotion of freedom, equality, diversity, spirituality, responsible ecology and international peace. It doesn’t call itself a “religion,” but rather opts for the phrase, “human spirituality,” thereby making it into a public library’s free literature bin where specifically “religious” newspapers are not permitted. With its claims of tolerance and diversity, it masks the real agenda of a secretive world-wide religious network. Frequently Jones refers to what New Age writers call the “Age of Aquarius.” In the new Age of Aquarius where there is neither good nor evil, the ultimate liberation of mankind will finally be realized-liberation from ethics, from guilt, from sexual norms and from God. Only one religious option will not be allowed to live in peace, namely Biblical Christianity (p. 4). Tom Williams, a priest of the Church of All Worlds, labels Christendom as the “Christian interlude.” This “Christian interlude,” called in astrological circles the “age of Pisces” (fish-historic symbol of the Christian faith), fueled by masculine “yang” energy, is now at an end. It is being superseded by the feminine “yin” energy of the Age of Aquarius. For me personally, this would be comical if it wasn’t so serious and if the parallels that are happening around us today weren’t so striking! Shirley MacLaine in her best seller, Going Within (1989), states that there is nothing new about the New Age. She goes on to say, “[Ancient] Christian Gnostics operated with New Age knowledge” (pp. 29–30). Hence Peter Jones is correct in asserting that the New Age is indeed ancient Gnosticism revisited, however difficult it is to pin down.

TENETS OF THE NEW AGE

Because Gnostics believed the material, physical world to be evil (mostly because it limits the self·actualizing of the spirit within), it is a problem for their thinking. They teach that the creation was the result of a cosmic “goof” committed by the foolish Creator God (the Demiurge) of the Bible. The Gnostics knew that if their system was going to work, they had to get rid of the God of the Bible. This explains much of the anti-creation and anti-Old Testament sentiment found in ancient Gnostic texts. The word “creation” takes on a different meaning for Gnostic/New Agers. Creation for them is simply another way of referring to the sum of all things, understood according to a syncretistic pantheism. Creation (ex nihilo) is abhorrent for New Agers. Shirley MacLaine writes, “God lies within, and therefore we are each part of God. Since there is no separateness, we are each Godlike, and God is in each of us…We are literally made up of God energy, therefore we can create whatever we want in life because we are each co-creating with the energy that makes the universe itself” (Going Within p. 100). A New Age United Presbyterian minister in Colorado prayed to the “great Green One” referring to the goddess Gaia, Mother Earth, who gives to the universe its basic unity. Christian liturgies beg her forgiveness, using Hindu chants to charm her life-giving energy. Vice President Al Gore, in his book Earth in the Balance: Ecology and the Human Spirit, gives evidence that his involvement in ecology is an expression of his belief in the connectedness of all things, in the great value of all religious faiths, and in his hope that ancient pagan goddess worship will helpbring us planetary and personal salvation. 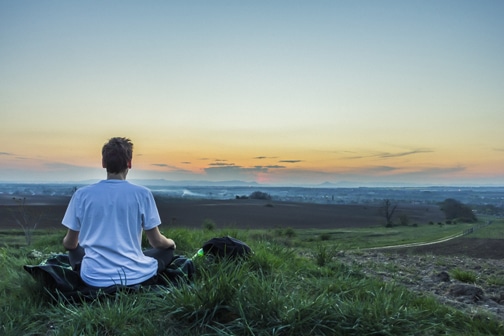 Though caught in matter, humanity can once again become part of the universal whole by a process of self-knowledge and self-realization. The Christ of the Gnostics doesn’t deal with sin by His vicarious atonement. Rather He comes as a revealer of “gnosis,” the knowledge of one’s own divinity and potential.

In Gnostic teachings as well as New Age, the female principle holds the key to salvation. Goddess savior is central. James Lovelock, a New Age spokesman, calls for a return to goddess worship. Anne Primavesi in her book, From Apocalypse to Genesis, gives a re-evaluation of Genesis. She says that the “story of Eve” should be read not as the “fall” of the human race, but of its coming to maturity! She says the Serpent is the symbol of wisdom offered to humankind because he exposed the problems of keeping rules which operate as rules of helplessness. Francis Watson, an extreme feminist, also believes that one should see the Serpent as the liberator, Eve as the heroine in her courageous quest for wisdom, and the Lord God as a jealous tyrant concerned only with the preservation of His own prerogatives.

There is no real special place for Jesus Christ in New Age thinking. Christ is a mere example of a true believer. There is no room or interest in His birth, death or resurrection. Christ is merely a symbol of full consciousness and self-knowledge.

The ideal for Gnostics and New Agers is to be “sexless.” Androgyny was a frequent word used here. In the Gospel of Thomas, Gnostic text holds out for the true believer the attainment of the sexless state. The church father Hyppolytus tells of Gnostic false teachers who held that Adam was a hermaphrodite (having both male and female reproductive organs). They appealed to Galatians 3:28 for support. Modern religious feminism seeks to move beyond God the Father to an imagery of bisexual androgynous deity by reintroducing the image of God as female to complement the image of God as male. The road to this perfect androgynous balance involves the destruction of the traditional male-female differenciation via sexual alternatives (alternative lifestyles) and New Age feminism. There is much more to this whole notion of “political correctness” and “gender inclusive” language than what meets the eye.

Peter Jones ends this book with a strong call for all Christians, much like the Christians of the early church, to stand and fight this heresy with the Word of God. He reminds us that the New Testament’s writings, and especially the Apostle Paul’s letters, faced this monster of Gnosticism head-on. Nowhere did they give in to goddess spirituality, sexual perversions and the destruction of creational structures in the home and in the church. Let us also be reminded of the comfort of God’s promise that one day the true knowledge of God (not self-gnosis) will fill the earth and every knee shall bow and tongue confess that Jesus Christ is Lord!