Did you ever visit a hospital for mentally ill?

Your first visit to such a hospital was most likely a very unsettling experience. Possibly sleep was slow in coming lhe following night.

You saw such unforgettable faces faces screwed up into the weirdest expressions, faces with silly grimaces on them, faces whose eyes had lost the luster of hope and life. You heard human voices making groaning noises, strange laughing noises, haunting noises. You were startled when a patient came up to you and said, “The Holy Spirit is after you; you’d better watch out.” You saw men and women pacing relentlessly back and forth and you couldn’t help thinking of animals in a cage, much as you loathed the thought. You saw young men and young women whose mask-like hopeless faces or profoundly agitated faces tugged hard at your heart.

Then you also saw many patients whose faces seemed so natural and who spoke in steady and wholly intelligent tones. You wondered why that Mrs. Wilson had come to the hospital. She was dressed so neatly and she was so gracious in her manner and speech and contact with others. How had she got out of step with life? And you couldn’t forget that Mr. Adams. He seemed to be so wholly capable of taking care of himself and of meeting people.

Your first visit to a hospital for the mentally ill was most likely a startling, bewildering, disturbing, unnerving experience.

Did you go back to the hospital for a second visit? or a third visit? It is to be hoped that you did. Possibly you went back often. Maybe in the providence of God you had to take a close relative or a dear friend to the hospital.

As you returned to the hospital once and again yom feelings about the place and the patients began to change. Especially the experience of bringing a dear one there opened your eyes to something very significant, and much of your feeling of frightened revulsion toward the hospital disappeared. What significant thing did you learn? You learned that in general the patients in a hospital for the mentally ill are people just like you.

That brings us to the question of the normal and the abnormal in the whole field of mental disturbances. In our college class in Abnormal psychology we used a well-known text called The psychology of abnormal people, by J. J. B. Morgan. This text enjoyed a good reputation in its day. A later text of considerable value and probably named with Morgan’s text in mind is called The psychology of normal people, by Tiffin, Knight and Josey.

Are the titles to these two texts desirable titles? They seem to imply that there are two classes of people, the normal and the abnormal, and that there is a clearly drawn line of difference between them. Is there such an absolute distinction in the field of mental disturbances? 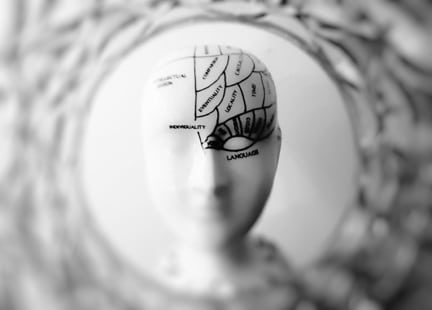 Yes, there is such a distinction, but it applies to a very limited number of people. This distinction does not apply to most of those who have beds in mental hospitals. In fact, the distinction as an absolute distinction hardly applies at all to those suffering from mental illness. To be sure, there most likely is some abnormality in the conduct or reaction of the one suffering from mental illness. He may be temporarily abnormal. He may be abnormal for a long time. But that is something other than saying that such a person is to be fixed in a class called “abnormal people.”

This is one important reason why we are approaching our subject as we are in this series of articles. Some one may very well ask why we bother with the mentally ill as we consider the inner states and needs of the average person in church and society. “Those people are insane,” the person with little knowledge may say; “what do I have to do with them?”

We are concerned with the mentally ill here because they are people like the rest of us. We want to take a close look at their inner needs, tensions, frustrations and “twists” of mind because we will see in sharper outline and in enlarged farm the needs, tensions, frustrations and “twists” of mind that mark the lives of us all. The feelings, moods and reactions of those who become mentally ill are not wholly strange, exotic things that belong properly in some distant foreign land. The states of mind of the mentally ill are deepenings, extensions, and twisted developments of the states of mind that are common to mankind. He who comes to understand the real nature of many cases of mental illness, both in their present character and in the history leading to them, often says to himself in deepest sincerity, “There but for the grace of God am I.”

Parenthetically it can be stated here that it was largely for the reason developed above that the writer or these articles preached regular sermons to the patients during his ten-year residence as hospital pastor at iI hospital for the mentally ill. No effort was made to scale the sermons down to some lower level of understanding. Whenever a visiting minister mistakenly felt that he had to “talk down” to what he thought might be the level of understanding of the patients, many of the patients would later express their resentment at the insult. On the other hand not a few patients expressed deep appreciation of the approach regularly employed in the chapel services. This manner of approach helped them to regain a measure of self-respect—a matter of considerable importance in the rebuilding of a broken personality.

In order to indicate this class of the abnormal ones we must make a distinction which is familiar to everyone having even an elementary knowledge of mental troubles. We must make a distinction between those who are mentally ill and those who are mentally deficient. In the second class, the Class of the mentally deficient or defective, we deal with people who suffer from a lack of something, not from the sickness of that which they have. Such cases of mental deficiency are referred to by the word amentia (lack of mentality). Cases of mental illness are in general covered by the term dementia (decline of mentality), a term not wholly satisfactory because in many cases of mental illness there is actually no impairment of the mental function. We hope to show later on that the popular approach to mental illness that concerns itself too largely with the purely mental aspect of the personality is a faulty approach.

People afflicted with amentia have been classified as idiots, imbeciles, morons and moral defectives. The idiot has a mental age of zero to two years. No matter how many years he may actually spend on earth, his mind will never develop beyond the mental grasp and power of a two year old child. The idiot cannot take care of his personal needs and cannot guard himself against common physical dangers—such as the normal traffic hazards met in crossing a street.

The imbecile is described as having a mental age of three to seven years. He is not an idiot, yet he is incapable of managing himself or his affairs, and as a child he cannot be taught to do so.

The moron (called feeble-minded in Great Britain) is rated as having a mental age of seven to twelve years. He needs a measure of protection and control for his own sake and for the sake of society. He can perform certain simple tasks of a routine nature, but he is unable to derive benefit from the usual instruction in regular schools.

A moral defective is usually a moron with strong criminal tendencies. Many of these get their names on the lists of criminals. Many women of this type become prostitutes. A superintendent of a large institution for the feeble-minded once told the writer that not a few of his female charges had had careers as gangsters’ “molls.” (In the United States the term feeble-minded is commonly used to refer to all cases of amentia and does not have the specific meaning that it has in Great Britain.)

The mentally deficient person is not primarily our concern in these articles. That is not because work with them is unimportant. Pastoral psychiatry docs not properly concern itself with such matters. We have referred to mental deficiency in partial detail in order that a clearer picture of the whole arert of personality disorders may be gained.

We might describe the mentally ill person as one who enters a hospital for the mentally ill and a mentally healthy person as one who does not enter such a hospital. However, such a “definition” would mean very little. It tells us nothing about the real character or mental illness or health. Also, the notion that mental illness is limited to those who become patients in hospitals for the mentally ill is plainly false. Many people outside such hospitals are living lives that are inwardly stormy and insecure. With improved and enlightened attitudes toward mental disturbances becoming more general it can be accurately reported that many people avoid the inconveniences of hospitalization because they have sought proper help at an early stage of the disturbance. And let us remember. the distinction between the mentally ill and the mentally healthy is very often not a matter of kind so much as a matter of degree.

Another method of describing the mentally ill person is the social one. The following definition is taken from a small book entitled Modern society and mental disease by Landis and Page. In getting at the nature of mental illness these men speak of the “normal” person in the following terms. “The normal individual is one whose desires, emotions, and interests are compatible with the social standards and pressures of his group. There is an absence of any prolonged conflict between the normal individual and his environment. His social adjustments are not easily disrupted by changes either in himself or his environment. His behavior is considered logical and understandable by his associates.” (p. 9).

What shall we think of a definition like this? Can we endorse it? How would the apostle Paul have fared if this definition of the “normal individual” had held sway in his day? He stuck resolutely and unswervingly to a message that was “a stumbling-block to the Jew and foolishness to the Creek.” How would Luther have fared? How would anyone fare who persistently challenges the standards and notions of the society in which he lives?

Must we not conclude that there is danger in such a definition? Indeed, no one should summarily dismiss the opinion of Landis and Page without giving it due and careful thought. We do live in the world and we have to find a modus vivendi in its social structure. But there is altogether too much in such a definition that might encourage an annoyed society to put the label of “insane” on a man who persisted in disrupting the accepted order of things. Such a “social” definition or the “normal individual” strikes too close to those courageous men who “turned the world upside down,” and to that solider of truth who was called a “babbler” by a society that did not understand the things of God. Society owes much to that host of “queer people” who have challenged its false standards and have rebuked its easy pretensions.

How then shall we define mental health and mental illness? We shall explore this interesting subject further next time.