“If thy brother sin against thee…”

The heading of this article places Matthew 18 quotations, as the reader may have noticed. The reason is that the reference is not to the entire chapter but only to the well known verses 15 to 18 which read as follows: “And if thy brother sin against thee, go, show him his fault between thee and him alone: if he hear thee thou hast gained thy brother. But if he hear thee not, take with thee one or two more, that at the mouth of two witnesses or three every word may be established. And if he refuse to hear them, tell it unto the church; and if he refuse to hear the church also, let him be unto thee as the Gentile and the publican.”

In church terminology this passage is usually referred to as “Matthew 18” and everyone who has some acquaintance with church governmental matters knows at once what is meant.

We call special attention to the phrase: “against thee.” This shows clearly that Christ did not have in mind all objections which a member of the church may have against a fellow-member, not even all objections against a brother’s dealings with him, but only those which he counts as sin and which he is not able to overlook without doing something about them. The reference is only to personal grievances of a serious nature. If a brother sins publicly without sinning against us personally another course must be followed. Public sins which give offense to many must be rebuked and confessed publicly.

Our Church Order does not mention personal grievances in connection with the rule of Matthew 18. This may be regarded as one of the weaknesses or omissions of our Church Order. After all, what Christ prescribes in this chapter concerns first of all the course of procedure which a Christian should follow’ when a brother sins against him personally. Article 72 simply deduces from this passage of Scripture a principle of a more general character; namely, that its provisions should be carried out whenever a secret sin is committed by a member of the church. That article reads: “In case anyone errs in doctrine or offends in conduct, as long as the sin is of a private character, not giving public offense, the rule clearly prescribed by Christ in Matthew 18 shall be followed.” The proposed new Church Order offers the same reading except that it states: “as long as the sin is secret.” We are not inclined to question the validity of the application in our Church Order of Matthew 18 to secret sins while our Lord mentioned only personal grievances. The underlying principle of this, as of all other, precepts of our Lord is that we should love the neighbor as ourselves, particularly when he is a brother in Christ. Therefore, when our Church Order declares that when secret sins are committed the rule of Matthew 18 must be followed, this should not be understood as an interpretation of the phrase “against thee,” as if the composers of this article wanted to say that every sin which a brother commits is a sin against us personally. The thought is simply that the desire to spare and save the brother who errs in doctrine or in life—when his sin is known only to one person, or to very few—dictates the same procedure which must be followed in the case of a personal grievance against a brother.

This interpretation of the rule of Matthew 18 is corroborated in the Church Order Commentary by Van Dellen and Monsma which states on page 301: “Present day reliable commentators agree that Christ referred only to unchristian conduct of one toward another (italics mine–K). But the example and instruction which Christ gives us in Matthew 18 regarding personal offenses which are not generally known, and as such may be termed secret sins…may certainly be applied to all kinds of private sins including those that are doctrinal in character.” 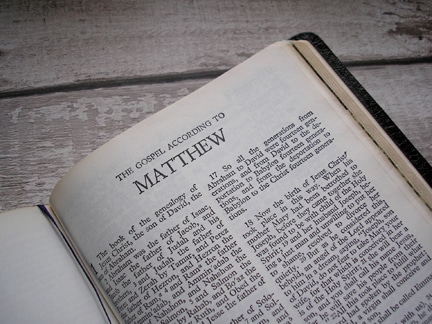 MISUSE OF THIS PASSAGE

What, then, do we mean by the misuse of “Matthew 18”? This, that there are those who insist that this rule shall be followed even when public sins, or what we regard as public sins, are committed or when what we regard as erroneous doctrines are proclaimed publicly, whether in public meetings, in print, or in some other public manner. This is an unwarranted interpretation of Matthew IS, as the very words of the passage (“against thee”) clearly prove. It is also contrary to the interpretation of that passage in our Church Order.

Sometimes, when public disagreement is expressed with views that were uttered in public, whether by the spoken or the written word, those who are displeased with the public dissent—either because they were in sympathy with the first speaker or writer, or because they are afflicted with the prevailing allergy to controversy—complain that Matthew 18 was violated and that those who took public issue with the views first aired are lacking in brotherly love. We know of one instance in which even a Christian Reformed Synod refused to consider a complaint by a consistory against a certain statement in a Back to God Hour sermon (we are not now passing judgment on the merits of the complaint!) on the ground that the complainants should first have followed the rule of Matthew 18. We hold that that was a wrong decision. We hope the precedent will not be followed by other governing bodies in the Church. If consistories should make that a rule in every case of complaint against a member charged with a public sin, their stand would be a serious hindrance to the proper exercise of Christian discipline.

Another instance of misuse of Matthew 18 is the criticism directed against the editors of three of our periodicals, De Wachter, The Banner and TORCH AND TRUMPET, for writing against articles in our Seminary paper which questioned the infallibility of the Scriptures. Those articles were printed in a magazine that was read outside of the Seminary as well as by its students; yet the editors of the publications above mentioned were blamed for the controversy which ensued on the ground that they had failed to observe the rule of Matthew 18!

We know of no principle, rule, or passage in Scripture which forbids public refutation of public utterances which are held to be unsound. Surely, there is nothing in the example of Christ and the apostles which condemns such action. On the contrary, they themselves set us an example of open opposition to deviating doctrines and conduct. Did our Lord first talk to the Pharisees and Sadducees personally before flaying their formalism, traditionalism, and hypocrisy? No one, we are sure, holds that he did. Did Paul first write a personal letter of admonition to the member of the church at Corinth who lived in incest, before condemning his action in a letter to the entire church of that city? If he had done so he would doubtless have made mention of it in his epistle. Did the same apostle write letters of rebuke to the false teachers in the Galatian churches before his public exposure of their heresy in his epistle to those churches? Did he expostulate privately with Peter for eating with the Gentiles and then withdrawing when the Jewish brethren entered on ·the scene (Galatians 2:14)? Paul makes no mention of it. Does John say anything in his third epistle about addressing personal admonitions to Diotrephes before mentioning him by name for loving “to have the preeminence” in the church and “prating against us with wicked words”?

We do not deny that there are instances when it is advisable to seek personal contact with those who err publicly before expressing public dissent. That is the case especially when there is room for doubt about the nature or meaning of what has been done or said. But such personal contact may never be demanded on the ground of Matthew 18, least of all by a governing body of the church. Love for the brother may require such a personal approach even in certain issues of a public character; but love for the brother should never become the excuse for suppressing one’s love for tho truth and for the church.