After giving a thumbnail sketch/report of what happened at Synod this year to our council I was asked if I would be willing to put some of those thoughts down on paper. I will not attempt to summarize every decision made but try to touch on highlights and what I feel to be some potential areas of concern.

The singing in the Church sanctuary where all the plenary sessions took place was absolutely amazing. I had heard about this before attending Synod. It is, however, something that simply must be experienced first hand as no description does it justice. The sound of plus or minus 200 male voices filled the church building where we met. We sang Psalms and Hymns that are obviously old favorites among this group despite the archaic language and references to Jehovah. I believe the blue Psalter was used exclusively.

I thoroughly enjoyed hearing from the fraternal delegates from sister denominations. In the Committee for Ecumenical Relations and Church Unity (CERCU) and Committee for Ecumenical Contact with Churches Abroad (CECCA) reports these brothers and sisters are often reduced to a paragraph or two of description. In speaking with these brothers over meals and hearing the brothers address the body and bring greetings from their respective federations was for the most part very uplifting. In particular I would single out Rev. Yonson Dethan from the Calvinist Reformed Church in Indonesia. We are in phase 1 of ecclesiastical relations with this denomination. This brother, and the denomination to which he belongs, face daily the threat of persecution in a predominantly Muslim country. After he brought us warm greetings and a personal gift for our chairman, Rev Sikkema added some additional comments surrounding the death of Rev. Dethan’s son in what appears to be an obvious case of medical malpractice. He also told of the manner in which Rev. Dethan has let his light shine even in this tragic event. After Rev. Sikkema finished I do not believe there was a dry eye in the building.

The body after much debate voted in favor of accepting the recommendations of the Study Committee on missions to establish a permanent federation missions committee which is to oversee and assist the work of a missions coordinator (a permanent full time position). The committee, made up of one member from each classis, is to present a candidate for this position at the next Synod. This federation missions model is borrowed heavily from the OPC and apparently works well for them.

In and of itself there is nothing inherently wrong with this model but it does use a top down approach which, although arguably more efficient, also has greater potential for misuse. Those of us who came out of the CRC can testify to some of the local congregations’ frustration with the missions board (permanent full time positions) and the direction of some of the organizations took over time that were supported by denominational quotas (we are more polite, we call it “askings”). I would also raise the concern that a federationally directed missions effort tends to reduce the pew sitter to “praying and paying.” The complaint is often leveled against our congregations that we are not nearly missions minded enough. I believe that to be valid, but I would argue that many of us are already a product of a federationally directed missions effort from our former denomination.

Although this did not generate a lot of debate the Proposed Joint Church Order (PJCO) that our federation has been working on with the Canadian Reformed Churches had some revisions of which the most notable are the Forms for Discipline. The Joint Church Order committee (JCO) report actually recommended to adopt the PJCO provisionally at Synod 2012 but the pre-advise committee recommended that this be held over for consistories to study as the Forms for Discipline in particular have not yet been seen by the consistories. Consistories that would like to suggest changes are to send proposed changes to the PJCO committee. The PJCO differs significantly from our current Church Order particularly in regard to the organization of broader assemblies (Classis and Synod). Our current practice is to send delegates from each consistory to their respective Classis and send delegates from each consistory to Synod as well. The PJCO would split this up. Assemblies of Classis and not the local consistories would send delegates to Regional and General Synods.

I would recognize that our current practice for holding Synods is somewhat cumbersome as there are difficulties involved with getting something done with 200 people in the room as well as the logistics for the convening consistory, among other things. What is being suggested by the JCO, however, is once again a much more top down hierarchical approach . I would submit that this practice lends itself to Assemblies of Classis sending our elite to Regional and General Synods to make our federation decisions. This is substantially different from how the founding consistories of our federation assembled our current Church Order where every consistory can have a voice at Synod.

The Psalter Hymnal committee was established in 1997 and has been working on the new Psalter Hymnal since then. Every Synod since then has approved additions, changes and clarifications to their mandate and this Synod was no exception as we are now pursuing working together with the OPC to produce a songbook for joint use in our respective federations. If the OPC and URCNA committees can come to an agreement, this document would presumably be presented at the next Synod in 2014. If adopted we could have a proposal for a songbook by the Synod after that.

At the last Synod, a Hymn Proposal was presented for evaluation by the churches which developed much furor in many of our congregations, to say the least. It is very clear that we feel very strongly about the songs that we sing. One of the overtures at this year’s Synod had to do with having the Psalter Hymnal committee reevaluate the direction of the song selection process particularly in regards to gender inclusive language, the discontinuation of the use of the word Jehovah, and other word changes. This overture, after being revised somewhat by the pre-advise committee, was adopted, then rescinded the next morning, and after more debate was defeated. The way it was spun was that the language in the overture was inflammatory.

The good news is that the OPC have the many of the same concerns with the current Hymn Proposal, according to the OPC fraternal delegate who attended Synod 2012. Also, the indications from the current committee members seemed to indicate that they have received this message loud and clear as many consistories have expressed concern over the changes to the songs in the current revision of the Hymn Proposal.

One of the more notable recommendations of the CERCU committee report was to enter into phase 2 ecclesiastical fellowship with the Reformed Presbyterian Churches of North America (RPCNA). This recommendation generated much debate on the floor of Synod due to the fact that the RPCNA ordain women deacons. The vote was very close but in the end this recommendation was passed. The grounds given for moving forward on this point are mainly focused around two central points. The first is in the RPCNA’s church polity, deacons are not part of the ruling body; the second theirs is a historic practice which predates the feminist movement. Our church order states that this decision must be still be ratified by a majority of the consistories. 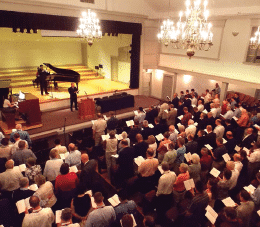 As little as ten years ago, the RPCNA published a document affirming the practice of ordaining women deacons. It is not likely that they are working towards eliminating this practice. I do not believe that there is acceptance of this practice in our federation at least according to those that stood to speak on this. I would, however, pose a few questions.

First, if the deacons in their church polity are not part of the ruling body why do they need to be ordained? God fearing women throughout history have done an enormous amount of work in the church without being ordained.

Secondly, an examination of when they began this practice (1888) reveals that it began during the period of history that is marked by the woman’s suffrage movement. How is this not linked to the feminist movement?

Third, what this will look like on the ground in our congregations? Phase 2 by definition means that we have pulpit exchanges and that the transfer of membership is accepted. If ratified are we are not essentially saying that this practice is acceptable? It would certainly be difficult to take a brother or sister to task for holding and promoting this view. This will no doubt be characterized as narrow minded as “Iron sharpens Iron” was an often used phrase at this years Synod.

I had never been to a Synod of our federation before. Unlike many others, I have nothing to compare this experience to. In speaking with other brothers from our congregation who have been delegates to a URCNA Synod I had always heard that it is for the most part a positive experience and that there is a spirit of brotherhood. Although there are areas of concern and decisions made that councils within the federation may disagree with, I would agree that there is a genuine consensus of belief that creates that spirit of brotherhood referred to above.

Actually seeing and experiencing the mechanics of what it takes to belong to a federation was enlightening. As members in local churches there is often a tendency to treat what is happening in our federation outside of the borders of our own congregations. Broader assemblies may be interesting and perhaps worthy of discussion over coffee, but definitely several steps removed from the local scene. Attending a Classis and particularly a Synod brings this much closer to home as one realizes that we are part of a federation of like minded believers. Thanks be to God for the work that was done. May He use it to bring glory and honor to His Name.

Mr. Ed Veldman is a first-time elder delegate to the URCNA Synod. He is a member of Trinity Reformed Church in Lethbridge, AB.