A Sample of Ecumenical Agitation

The existence of separate Christian denominations is widely deplored in our time, if we may be permitted to express an opinion so obviously true as scarcely to warrant mention. “Ecumenicism” is the impressive word coined out of this impatience with ecclesiastical boundaries, and it is often on most every churchman’s lips these days.

Many orthodox and conservative Christians have viewed this reaction with great alarm, especially as the outlines of a single, all-embracing, world “church” seem to emerge out of the efforts of those busy to promote the cause of such a significant movement as that represented by the World Council of Christian Churches. And such fears are not without foundation, for such movements frequently reveal little toleration for the individuals and churches unwilling to go along. We can remember very well a conversation with Dr. E. Stanley Jones, internationally famous Methodist leader and active proponent of the ecumenical cause, in which he declared that a certain program in which he also was engaged was “designed” to build a fire under all unwilling clergymen in every major denomination—a fire which would force them to cooperate. This is the language of power without concern for the existence and well-being of those who do not agree.

There is, of course, a very good side to this ecumenical consciousness of our day. The Bible emphasizes repeatedly that in very reality there is but one Body, even as there is but one Savior (Ephesians 4). Denominational boundaries are never the same as national or social boundaries, that is, they may never be regarded as merely normal differences based upon race or temperament or convenience or tradition. The ideal of the Church organizationally as well as doctrinally and spiritually is union.

Out of this heightened desire to remove all landmarks separating those who profess the Name of Christ has come the clamor for conference and consultation between various denominational groups. A single instance of this is the one to be noted in The Netherlands involving the Gereformeerde Kerken (independent Calvinist denomination, of which the Christian Reformed Church in America is often said to be an outgrowth) and the old state church in Holland, called the Hervormde Kerk (Reformed Church). A vigorous group of younger ministers in the former denomination have openly advocated free exchange of pulpit privileges with state church clergymen, consultation on doctrinal matters with a view to possible reunion, etc.

We found a description of the decision and grounds of the 1955 synod (Leeuwarden) of the Gereformeerde Kerken as written by its preSident, the Rev. C. Vander Woude, and quoted in Amsterdams Kerkblad to be very helpful on this entire matter. We might summarize President Vander Woude’s article as follows:

1. A joint report Signed by delegates from both denominations was presented to both synods; in the writer’s memory no previous synod ever gave more thorough and frank discussion to the problem of how best the two denominations might approach one another for reasons of conference.

2. Prof. Herman Ridderbos was reporter for the committee of synod in whose hands the joint report was placed for study and advice. Dr. Ridderbos spoke appreciatively of the fact that such a joint report might well serve to prevent either side from presenting a caricature of the other’s point of view, yet he felt constrained to warn his brethren that such a report might easily obscure the fact that in such a denomination as the Dutch state church widely divergent points of view and attitudes with respect to basic Christian teachings are tolerated. This, in Prof. Ridderbos’ opinion, reduced the significance of the joint report considerably.

3. Dr. Ridderbos took exception to a statement in the joint report which asserts “that the Scriptures function authoritatively in the preaching as well for the flervormden as the Gere/ormeerden, and that in this respect practically little difference exists.” The reporter is said to have pointed out that in the case of his own denomination this respect for the authority of the Word is standardized by compulsory commitment to its creeds, whereas in the state church this is not the case. In practice, therefore, one cannot say that very little difference exists between the two denominations.

4. Following Ridderbos’ leadership, synod decided not to go into the suggestion of sending delegates to one another’s synods, since that would create the impression that the principal differences which divide them were no more regarded as serious or were in effect removed.

Our impression is that the Leeuwarden synod received very good advice, and is to be congratulated for its decision to follow it.

An Orthodox Presbyterian Hymnal “You can sing more theology into people than you can preach into them”—this was said by a wise professor to a class of theological students in my day in school.

Although not likely to raise the esteem of students for the central importance of the preaching of God’s Word, the observation is very obvious as to its emphasis upon the significance of the songs sung by God’s people in their worship and fellowship. 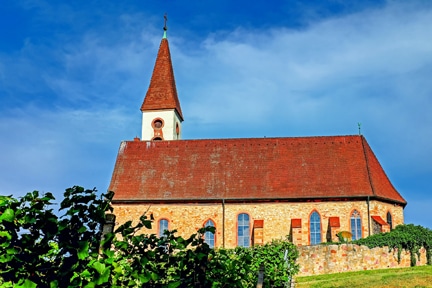 The importance of biblically sound songs has also been noted by the Orthodox Presbyterian Church, and Dr. Edward J. Young, well-known professor of Old Testament at Westminster Theological Seminary, reports* on the action his Church has taken to provide a suitable hymnal. The Orthodox Presbyterian Church and the Christian Reformed Church have another point in common, Dr. Young’s report reveals, since both have committees at work to produce an improved hymnody for Reformed worshippers.

Scriptural validity and musical suitability are the standards Dr. Young’s committee has employed, he relates. After some ten years since this project was suggested, the committee has apparently settled on a collection of spiritual songs it regards as desirable for Orthodox Presbyterian use. Some readers will be interested to notice that this hymnal will include “a goodly proportion of versions of the Psalms.”

“The hymnal,” Dr. Young concludes, “is to belong to the Church. We pray that it may form a suitable vehicle of praise. It contains a veritable treasury of the greatest hymns of the ages; hymns that will grow upon us the more we sing them and come to know them. Here are many many old favorites; here also are some hymns that are new. An we believe are true to the Bible; all are Singable. May we use this book to the glory of that one true God whom we delight to worship and to praise.”

All of Reformed Christendom cannot help but profit from such effort, and we look forward to the publication of this book of praise. May it serve to stimulate interest on the part of God’s children to sing only such things as truly reflect the glory of God’s grace as revealed in his infallible Word. For there is much music around these days which is theologically and spiritually impossible for any serious-minded Calvinist. Sad to say, many reveal in their delight with such music that their Christian sensitivities are not as well-developed as they ought to be.

A ten-member Commission on Marriage and Family Life appoint ed by the United Lutheran Church in America (largest U.S. Lutheran body, with some 2,225,000 of the 7,000,000 Lutherans in the U.S. and Canada) called for relaxation of the Lutheran attitude to divorce. The commission’s report would supersede the code adopted in 1930, under which only “innocent” parties to divorce granted for adultery or desertion could be remarried—and not within a year of the divorce. “Our new stand,” said the Rev. William C. Zimman, chairman of the commission, “recognizes a more realistic view… It doesn’t mean that a person will be permitted to marry the day after he obtains a divorce, but it will be easier for the church to look at the whole matter.” The new position is “an attempt to reflect the Biblical teaching of marriage as a sexual union, and to put remarriage of divorced persons on a less legalistic basis and a different basis than guilt of innocence.”

Marriage is a “sexual union” Dr. Zimman is said to assert, and such is the Bible’s teaching. Indeed, marriage is that, but we wonder how anyone can he so naive as to think that the Bible represents it as only that! Everyone can see, of course, that such a position must be maintained in order to give the Church an opportunity “easier…to look at the whole matter.” If the relationship between the Covenant Jehovah and his people, between the Covenant Head and his redeemed Body is kept in view as the reference point for marriage. divorce never becomes something which the church can easily look upon.

The Hopefulness of Wisconsin Heresy Time can never escape the temptation to slant its news coverage of religious events according to the spirit of modem unconcern for doctrinal purity. This is again evident in its January 2, 1956, story of the latest Lutheran heresy trials as reflected in a very strong condemnation of the Northwest Synod of the United Lutheran Church in America’s action presented by the Rev. Clarence Kilde, Congregational minister of Oconomowoc, Wisconsin. KiIde’s article appeared in the magazine, Christianity and Crisis, a periodical edited by the famous Reinhold Niebuhr.

Kilde’s case in defense of the Lutheran pastors accused of false doctrine is summarized by Time in this manner:

1. The virgin birth of Christ “is neither a great historical doctrine nor by itself profound theology…” Mark does not mention it; Matthew’s reference to it is dubious since “the oldest manuscript of the Gospel according to St. Matthew, the Syriac, concludes the genealogical table thus, ‘And Joseph begat Jesus.’” Kilde interprets John and Paul’s Jack of specific reference to the virgin birth in just so many words as indication that they did not regard it as a doctrine “dignified enough to mention.” The charges against the accused pastors are really very silly, therefore.

2. The real trouble with the accused pastors was that they were spiritually sincere men of theological integrity rather than promoters of parish growth in terms of larger membership and greater financial receipts.

3. The mere existence of the heretics is a hopeful sign, Kilde asserts, since it indicates that “the ice is beginning to break, the long, cold winter of dark dogmatism…is beginning to wane.”

May we suggest that Time and the Rev. Mr. Kilde remind themselves that the accused pastors had assumed certain ordination vows, according to which the only honest thing to do was to accept and teach the doctrines of the denomination in which they hold office, or resign?