Considerable attention has been paid to the preliminary trial of the Rev. George Crist, Jr., accused by his denomination, the Northwest Synod of the United Lutheran Church in America, of “holding, teaching and preaching doctrines in conflict with the Lutheran faith.” Result of this investigation: Pastor Crist was adjudged guilty on nine counts, samples of which are denial of the virgin birth of Christ, doubt as to the Resurrection and Ascension, denial of the Lutheran doctrines of original sin and Christ’s real presence in the Lord’s Supper.

Press accounts of this trial revealed amazement that such a thing could happen at all. And there was some ground for this reaction—this is the first formal trial for heresy ever held in the 60-year history of the Northwest Synod, which is generally regarded as one of the more liberal Lutheran groups in the United States.

It is interesting to note the reactions Time, widely-read newsmagazine, published in its issue for August 29, 1955. In response to its news account of the trial (August 8, 1955), four letters are in substance reproduced. The first is from a clergyman who protests that Pastor Crist’s trial judges had no right to ask of him that he should withdraw his deviating views and submit to the doctrinal standards of the Northwest Synod. This is against the true spirit of Protestantism which insists “that everyone is free to interpret the Scriptures as he pleases.” The second is in a similar vein, alleging that “the clergy are quick to remind us that we have been endowed by our Creator with the power of reason, but alas, they forbid us to use it…” A Staten Island, N.Y. reader also sympathizes with the accused, declaring that this trial must have convinced Mr. Crist that his church “is a dead and stagnant thing…”

Letter no. 4 is from Pastor Crist himself. In it he attempts a defense according to this pattern: 1) “I have not set out to teach doctrine in conflict with Lutheran doctrine.” 2) “I have attempted what every preacher must attempt, to interpret the doctrine, to translate it into today’s language and thought forms.”

Just exactly what these statements mean for the Durham, Wis. pastor is easily seen from a concluding paragraph, in which he summarizes his conception of Christianity. It reads:

“Life in Christ” is the content of faith not intellectual assent to a list of propositional truths but the total involvement of my life in creative freedom, in that love which is incarnate in Christ. Regarding the Biblical accounts: I have not attempted a so-called naturalistic interpretation. I have merely asserted what seems normal and natural assumption, that the accounts as Stich are relative, historical, open to investigation and therefore subject to a variety of interpretations and opinions. Luther recognized this. Those who have raised these issues have insisted on my holding their opinions, not on the level of faith and religious significance, but on the level of the text itself, that is, on the level of the historically relative. To ask for “reconciliation” here is to ask for intellectual and spiritual suicide.

Here is another sample of the consequences of that heresy which reduces the infallible revelation of God’s Word to something so “relative” as to be beyond the possibility (or desirability) of any fixed interpretation. Creedal statements are merely historical records of the way church doctrine appeared at the time of their composition to them who were their authors, and have only traditional value. That to which they refer is true, but that which they say about it must be completely re-stated in terms of today’s experience and today’s learning—which means that it is quite possible that we today say something actually contradictory to that which the creeds literally express, and yet may properly claim to subscribe to them after all!

Deception, confusion and dishonesty are always close at hand when heresy makes its way in the Church. Would that those who entertain views deviating from official creedal positions would deal openly and candidly, expressing themselves in language clear and unambiguous, making it possible for those who desire to be faithful to the Word of God as set forth in these creeds to identify and deal with them!

This wish the Scriptures offer us little promise to expect. Therefore the faithful will need to heed the injunction of St. John, “Don’t trust every spirit, dear friends of mine, but test them to discover whether they come from God or not. For the world is full of false prophets” (I, 4:1, Phillips). And those who are embarrassed by this realistic attitude toward the ever-present threat of false doctrine will, I suppose, continue to raise the cry of “heresy hunting” until the end. 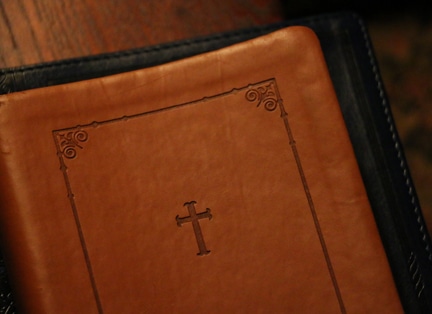 What is Really Going On in the Churches Today?

“Is the Religious Boom a Spiritual Bust?” asks Dr. Eugene Carson Blake, stated clerk of General Assembly of the Presbyterian Church in the U.S.A. and president of the National Council of Churches of Christ in the U.S.A., in another feature article of the type leading secular journals have been carrying of late. This is in Look for September 20, 1955, and like many others, is lavishly illustrated by a color cover shot of Billy Graham, two more large pictures of Dr. Graham in action, another of a tent meeting with 12,500 in attendance plus a shot of an out-door service “in a park area convenient for picnickers.”

All of this is designed to get Look readers to examine with Dr. Blake the current interest in religion. What does Blake have to say about the things going on in today’s churches and religious gatherings?

“That there is a boom in religion, none will deny” asserts the author. Prayer at the opening of cabinet sessions, the enormous sale of religious books, large crowds attending evangelistic services, religious songs high on the list of juke-box hits, increase in church membership from 18 percent in 1870 to a present all-time high of 60 percent, 35,400,000 children in America’s Sunday schools, bulging theolOgical seminary enrollments, more than $3,000,000,000 per year being given to churches and synagogues, 1,000,000 Revised Standard Version Bibles sold in the first three months of its publication—surely this is evidence enough to prove the existence of “a boom in religion.”

Dr. Blake is not so superficial as to think that all of this is to be accepted as sure evidence of a true interest in genuine religion. He suggests that there is possibly a great deal of idolatry in the picture. Thus many are probably attempting to “use” God for selfish reasons, which means that the increase in religious interest becomes a possible danger. It may become tragic, indeed, if it becomes a prop and a justification for an essentially unreligious life instead of an aid to new moral and spiritual insights.

Blake points to tIle revival of such idols in American religion as tIle American way of life, industrial prosperity and worldly success, assurance of survival, physical health, and personal peace. Patriotic groups move in on religious services to demand that the preacher say those things which glorify the state, threatening to label all who resist as “subversive.” Individual wealth now often dependent upon invention and industry rather than sun and rain, Mammon has become a popular idol. “One of tIle major spiritual issues of our time is the concern of the ‘little man’ for the security of his job. Important as this is, it would be tragic if men understood Christianity to be promising them prosperity and job security as a return for being polite to God.”

The re-examination and lowering of traditional bars against the ordination of women to the Gospel ministry is an indication of the current tendency to feminize God and religion, stimulated by the threat of atomic destruction and the resulting desire for assurance of survival. Worship in this idolatrous fashion always exposes an “escapist religion that depends on a confusion of sexual and religious impulses . . .” This “could distort Christianity until its worshipers would be unable to distinguish between God and Astarte.”

In addition to worry about his job, Blake feels that modern man is neurotic in his concern for physical health. Much of current interest in religion is conditioned by this factor, as is to be seen in the popularity of “faith healing” groups. And in a word whose memory is fresh with the horrors of international conflict with all of its consequences, many long for something which will give them “peace of mind.” In the name of religion peace is apt to become an end in itself, and therefore reduce itself to another idol.

From this summary it is possible to see that Dr. Blake is capable of an intelligent appraisal of the so-called “boom” in religion. Is his prediction as to the outcome of such an upsurge in religious interest equally realistic? Not so that one could notice it. Blake prophesies:

I will . . . make a prediction: The religious boom in our country, guided by a competent and dedicated ministry, will not lead many Americans to bow before the ancient idols. I believe that the churches, in increasing cooperation with each other, will lead most of us to a fuller knowledge of God and a greater obedience to him. Such a spiritual revival, however, is dependent upon keeping the idols from the sanctuary. Faith in general is not enough. The crucial question remains: “What kind of God will you serve?”

Happy is the man who finds his soul’s satisfaction in the insights of an ancient faith. Happy is the nation whose God is the Lord.

When one applies the test of the Word to the phenomena of today’s religious interest its true quality is not too difficult to determine. We must then ask such questions as these, What is a true Church? and, Who are true Christians? Asking such questions is not enough, of course. One must also be sure to obtain answers such as furnished by the Belgic Confession, article 29:

The marks by which the true Church is known are these: If the pure doctrine of the gospel is preached therein; if it maintains the pure administration of the sacraments as instituted by Christ; if church discipline is exercised in punishing of sin; in short, if all things are managed according to the pure Word of God all things contrary thereto rejected, and Jesus Christ acknowledged as tho only Head of the Church . . .

With respect to those who are members of the Church, they may be known by the marks of Christians; namely, by faith, and when, having received Jesus Christ the only Savior, they avoid sin, follow after righteousness, love the true God and their neighbor, neither turn aside to the right or left, and crucify the flesh with the works thereof. But this is not to be understood as if there did not remain in them great infirmities; but they fight against them through the Spirit all the days of their life, continually taking refuge in the blood, death, passion, and obedience of our Lord Jesus Christ, in whom they have remission of sins, through faith in him . . .

Is there a “boom” in that kind of religion in today’s world?