That’s it! I’ve had enough. In fact, I am basically quitting. No, I’m not going to become iconoclastic and throw the thing out the window, but I sure won’t be spending much time putting my brain in neutral and just watching as I used to do. This has been coming on for some time. Yes, I’ve cut back over the past few years, but I’ve now come to the place where I’m basically cutting it out except for a few programs like Andy Griffith reruns, CNN, my wife’s craft shows and a couple of die hard decent programs that somehow haven’t received the Hollywood ax.

It’s been a part of my life since I can remember, but I’ve finally admitted to myself that the “thing” has become a Trojan horse in my home. I am fed up with the sleeze that oozes into my living room when the button gets pushed to the “on” position. As a good Jewish friend of mine would say, “Enough already?” But before you go channel surfing on me, please permit me to explain why I’ve come to this rather radical decision? 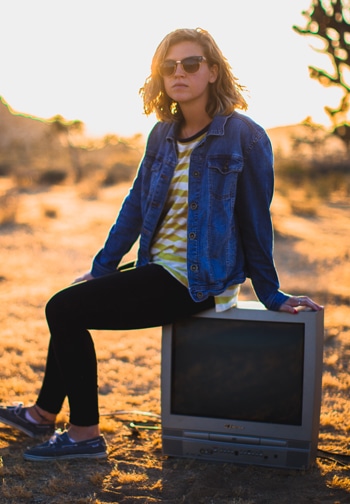 There are a number of reasons, but let me give you the top few. First, a huge percentage of what is on television today is nothing more than legal voyeurism. When I first realized that, it was like a slap in the face. What you would be arrested for on the sidewalk, you can freely view in your living room without fear of criminal indictment. It’s a legal peep show, but that fact doesn’t make it morally right any more than Roe vs. Wade made abortion acceptable to God.

The Scriptures are pretty clear about what I should be thinking about. For instance, Paul told the Philippian Christians (they also lived in a moral cesspool), “…whatever is true, whatever is honorable, whatever is right, whatever is pure, whatever is lovely, whatever is of good repute, if there is any excellence and if anything worthy of praise, let your mind dwell on these things.” Take that verse and paste it across your television set.

Instead of “viewer discretion advised,” why don’t we display the above verse right before “NYPD Blue” airs or a host of other trash that is pawned off as “entertainment”? The truth is that I cannot watch most of what is on the tube today and obey that mandate from God’s Word, and I violate that verse at the risk of my own moral, mental and spiritual well-being.

Now days it hardly matters what time you turn the thing on—it’s still a foul mess of garbage that gets dumped onto our carpets and into our impressionable minds (children and adults alike). For instance, recently on some talk shows like Sally Jesse Raphael, Ricki Lake, the Jerry Springer show (to name a few), one would have been served up the following menu: “A Mother Who Ran Off With Her Daughter’s Fiance,” “Women Who Marry Their Rapists,” “’I’m Marrying a 14-year-old Boy,” a woman who claims she got pregnant while making a pornographic movie. What has America come to that even some of us are feasting on these cow droppings of human depravity?

We are allowing ourselves to gorge on base filth in far too many cases, and it has and will continue to take a toll on our nation. You can’t swim with the sharks and not eventually lose something of value to your person. Likewise, you can’t mentally free fall in the jet stream of degenerate and degrading pollution without some lung and brain cell damage. We are not a well nation, and I, for one, refuse to simply shake my head in disgust and go on watching.

The Christian community, for a start, needs to go to the ballot box of capitalism and let the advertisers, the syndicates, the networks and the local stations know that we will not watch, we will not support their advertisers, and we will not continue to allow this rot to infect our children or our own hearts any longer. Just say “no”! If not now, when? If not you, then who? If it’s on and it’s true, honorable, right, pure, lovely, good, excellent, and worthy of praise, then full speed ahead, but if it’s not, then don’t silently perpetuate what belongs in a sanitation truck. Oh yes, I almost forgot. I need to give one word of caution: please don’t protest the ungodliness of what is on the small screen only to go watch it on the big one or go rent it at a later date. That doesn’t fool anybody—least of all Hollywood—and only mocks the process. That’s legalism of the worst sort. And please, for the sake of what’s left of our national moral fabric, just turn the thing of Land go play with your kids. Both of you will be richer and far healthier for the experience.

Gary Cox is pastor of Meadowview Presbyterian Church (PCA) and serves as chaplain for the North Carolina National Guard. This article is reprinted with permission from The Dispatch (owned by the New York Times). Rev. Cox also serves as the Southeast Regional Coordinator for the Mission to North America (MNA) of the Presbyterian Church in America(PCA).