As we serve the Lord in our Reformed congregations across the country, we need to remember that the leaven of theological liberalism is still with us. In this sense the dawn of the twenty-first century is not much different from the beginning of the twentieth.

“The battle cry of modern culture,” Wolfhart Pannenberg observes, has been “to follow the light of reason, not the prejudices of authority.”1 Donald Bloesch adds, “Though the omnicompetence of reason has been sharply challenged, faith in its practical efficacy still holds sway over the centers of knowledge and power in society.”2

Like the liberals of generations past, contemporary proponents of the same school of thought maintain that human reason has a central role to play in theology, either as the foundation or the criterion of a sound theology.

The one example that we shall consider is David Tracy, a professor of theology at the University of Chicago Divinity School. Tracy explicitly speaks about “the importance . . . of reason and its critical, self-correcting function for all theology.”3 Because he gives reason such a paramount place, he takes the position that “much of the traditional Christian manner of understanding . . . should be rejected.”4 Tracy here reminds us that we live at a time when much of contemporary theology feels intent on attacking the faith that was once for all delivered to the saints.

Tracy illustrates a commitment to the view that human reason has a corrective function with respect to the Bible: “Corrective reason . . . is directed upon the revelation . . . questioning its credentials, submitting it to scrutiny and criticism, removing from its content whatever may be involved in irreconcilable conflict with other well-founded convictions that may be held.”5

Although Tracy and other liberals believe that this corrective function of critical reason is quite legitimate when it operates with reference to Scripture, we should remember that the biblical position is much different. It is not our place to correct Scripture. It is the place of God-breathed Scripture to correct us: “All Scripture is given by inspiration of God and is profitable . . . for correction” (2 Timothy 3:16).

There is no question that contemporary liberals are full-blooded sons of the Enlightenment. As George Brown Tindall observes, “Reason . . . was the highest Virtue” for Enlightenment thinkers. They often underscored their position by capitalizing both words.6 The liberal theological establishment stands in the tradition of Immanuel Kant on this point. Kant’s Enlightenment motto is well remembered: “Have courage to use your own reason!”7 Tracy, no doubt, would agree heartily with the Kantian exhortation.

We may better understand the place that liberals give to reason if we remember that “the issue . . . is between reason as reason and reason as God.”8 Biblical Christianity affirms that the proper use of human reason is to think God’s thoughts after him. Theological liberalism, however, operates on the assumption that reason is God.

Liberalism gives to reason a finality and authority that it does not possess.

The first sin included a commitment to the supremacy of the human intellect. The position of God was clear: eating of the Tree of the Knowledge of Good and Evil would bring death (Genesis 2:17). There ought to have been a proper use of human reason at this point. Adam and Eve were to endeavor to think God’s thoughts after him. Man, however, fell when he no longer regarded his own reason as nothing more than reason. Reason in the fall became God. The human intellect was elevated, and the divine perspective was repudiated. Rather than remaining an object of fear because it would bring death, the Tree of Knowledge became “good for food . . . pleasant to the eyes, and . . . desirable to make one wise” (Genesis 3:6). 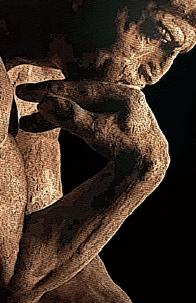 The Genesis narrative shows that giving to reason such a decisive authority is sin by the very nature of the case. How much more inappropriate it is to give reason a corrective function with reference to Scripture after the fall in the Garden of Eden! Scripture affirms, “The Gentiles walk in the futility of their mind, having their understanding darkened” (Ephesians 4:17–18). It is no exaggeration to maintain that “reason since the fall has been blind, proud, vain, wrapped in error and self-deceit.”9 Reason therefore must not have a magisterial function in theology, acting as the standard of what theology ought to be.

What exactly is the proper use of reason in theology? There can be no doubt that God invites us to use our reason in reflecting upon God and salvation. The ancient invitation still stands: “Come now, and let us reason together . . . though your sins are like scarlet, they shall be as white as snow” (Isaiah 1:18).

There likewise can be no dispute that the apostolic ministry entailed the use of reason. Luke summarizes the ministry of Paul in the synagogue in Thessalonica in these words: “Then Paul, as his custom was, went in to them, and for three Sabbaths reasoned with them from the Scriptures, explaining and demonstrating that the Christ had to suffer and rise again from the dead” (Acts 17:2–3).

This is a significant text because it demonstrates the elucidatory exercise of human reason. “In its elucidatory function, reason sifts, analyzes, expounds and, generally speaking, brings into light the content of revelation.”10 This is precisely what Paul was doing with reference to the Old Testament. He was expounding its contents and showing how it found fulfillment in Jesus of Nazareth.

What was the objective of Paul’s work as a theologian? Why do any of us give ourselves to the labor of using reason in the service of biblical exposition? It has been well said that the end of theology is always for “the clear and graceful proclamation of the gospel.”11

May God be pleased to give us the grace to use the gift of reason in the service of the gospel and the salvation of souls.

3. David Tracy, Blessed Rage for Order: The New Pluralism in Theology (Chicago and London: The University of Chicago Press, 1996), xiii.