Little things mean a lot. Have you been taught that by your parents? I hope you have. Little things like an encouraging word, an offering of congratulations, stepping out to help someone without being asked or noticed. If a family practices this, it’s generally a happy family. The same can be said of a neighborhood, even a society. 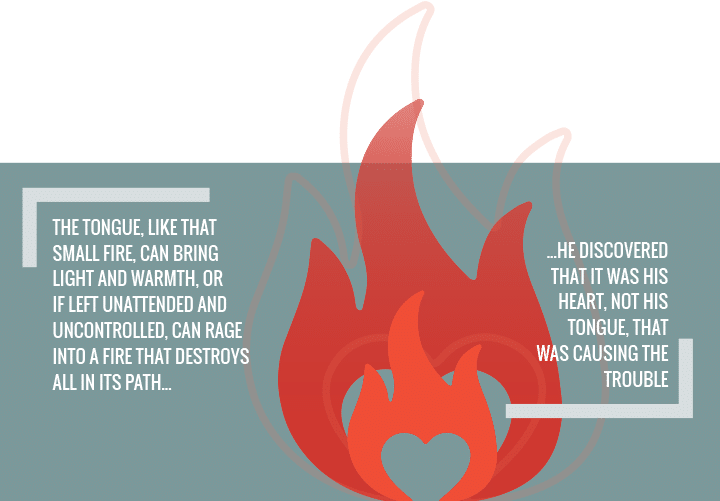 James refers to three little things that have a large-scale effect: a horse’s bridle, a ship’s rudder, and a small cooking fire—all images drawn from the common life of James’s day. They’re so common, in fact, that they’re easy to take for granted, and yet each has an enormous influence compared with its size; in most cases, each of these things isn’t even noticed and yet each can determine a significant outcome.

A horse’s bridle is a small piece of equipment compared with the size and strength of the animal it’s meant to direct. Imagine trying to get a horse to respond to take you in a certain direction without it. The same can be said of the rudder of a ship—it’s a tiny instrument, not even noticed since it’s below the water line. And yet, if the weather is calm or if it’s stormy, that little rudder guides the ship’s direction and so its ultimate destination. A small cooking fire serves several purposes in an encampment: by it campers cook, warm themselves, and are able to see. When the campers move on, the fire’s to be doused. But if it’s not doused thoroughly, we know what can happen: a forest fire.

Small things mean a lot. Sometimes we don’t consider small things important because they’re, well, small. But Christians know, or should know, the all-encompassing nature of new life in Christ. There isn’t anything the Lord Jesus Christ doesn’t touch. This doesn’t mean we walk around with a list of rules strapped to our backs, but it does mean that if Christ gave himself for you on Calvary’s cross, taking your sins onto himself and enduring a suffering we can’t even begin to imagine in order to pay for those sins, then your whole life has been affected—from the smallest thing to the largest.

The tongue, James is saying, is a small thing when compared with the rest of us: Aren’t our hands and feet more important and more prominent? What about our brains? The tongue, like the horse’s bridle, guides the direction of the life. The tongue, like the ship’s rudder, isn’t even seen, and so is easy to miss as important, and yet it’s the chief determiner of whether the ship will make it to port or get lost. And it’s to be held steady and on course, regardless of the weather. The tongue, like that small fire, can bring light and warmth, or if left unattended and uncontrolled, can rage into a fire that destroys all in its path.

In each of these cases, we see that the tongue and the instruments it’s compared with—a horse’s bridle, a ship’s rudder, and a small cooking fire—has tremendous influence for either good or evil. But it doesn’t act alone or by itself: a rider pulls the horse’s bridle to the left or the right; a helmsman is at the rudder ensuring the ship is on course; the last camper thoroughly douses the cooking fire before joining his party hiking up the mountain. We are to take control of these instruments to ensure their good effect, and so it is with the tongue.

How to do that? To read James on this is to wonder if there is a solution, a foolproof one anyway. He tells his readers that man has been given dominion by God, his maker, and even in a fallen world, has been able to exercise that dominion: “every kind of beast and bird, of reptile and sea creature, can be tamed and has been tamed by mankind, but no human being can tame the tongue,” he writes. “It is a restless evil, a deadly poison” (James 3:7–8, English Standard Version).

Before coming to a solution, we need to recognize the symptoms to identify the disease, and James gives us these as well. Earlier, James writes of the double-minded man, someone who, because of this condition, should not expect God to answer his prayers. Here James refers to a double-mouthed man. A popular expression is talking out of both sides of one’s mouth. This person blesses God, and likely his friends, but curses others whether they are brethren or simply anyone else, who is made in the likeness of God. The inconsistency of this as a lifestyle, as a way of regularly behaving, is pointed out by James as an identity crisis. New wine in old wineskins. One must make up one’s mind whether one is a fig tree or a grapevine, whether a salt or fresh water pond.

One or the Other

Can both salt water and fresh water stream from the same source? James asks (3:11). Can a fig tree bear olives or a grapevine produce figs (3:12)? That’s not going to happen. James is referring to the use of the tongue: that it will show only what the source of its speech—the heart—is. Here he teaches nothing different from what the Lord Jesus does in Matthew 12 and Luke 6: It’s out of the abundance of the heart that the mouth speaks.

That’s what James is aiming for, the heart. He provides plenty of examples, bad ones, and then points his readers to where the problem resides, ultimately not with the tongue, but the heart. For good fruit to be produced in speech, it’s the heart that needs to change first. Then the speech will follow. Where the apostle Paul refers to the fruit of the Spirit and keeping in step with the Spirit so that we no longer live according to the promptings of the natural man or the flesh (Gal. 5:25), James—steeped as he is in Old Testament wisdom literature—refers to wisdom and the meekness or gentleness of wisdom (3:13). But they are one and the same.

Meekness or gentleness here doesn’t necessarily mean being a wallflower or a doormat; it refers not just to the mannerism of behavior, but the motive for behavior that works itself out into mannerism. That’s why it leads to good works. The meekness of wisdom isn’t motivated out of fear, but love. It operates from the broadened landscape of God and neighbor rather than only the narrow place of the self. The meekness of wisdom isn’t expressed in silence either. David tried this in Psalm 39: afraid of the wrong or evil use of his tongue, he kept it tightly sealed inside his mouth. But that only made his heart burn within him. He discovered that it was his heart, not his tongue, that was causing the trouble. In fact, Psalm 39 shows that what David uncovers is that it was God who had silenced him, just so David could discover where the root of his problem was.

There are two kinds of wisdom, James tells us. The first is the one the world commends, the one of the natural man or the flesh. It’s earthly, unspiritual, even demonic, that is, coaxed and lit as though it’s a fuse, through the temptation of evil spirits. Among its hallmarks, James tells us, are bitter jealousy and selfish ambition (3:14)—there it is again: the self and its magnification instead of magnifying God and loving one’s neighbor.

Evil, Good, and How They Grow

Attendant to these, James tells us, are disorder and every vile practice, and no wonder: the unspiritual competition among a collection of selves ensures nothing gets done together as a group, since every “me-first” self is insisting instead on his or her own way. We often see this in the workplace, but at times also in the family and, yes, the church. Wherever it is, its source is not the wisdom from above that James commends (3:17).

What is this other wisdom, the wisdom that’s from above, as James calls it? This, remember, is the wisdom James tells his readers to ask for earlier in his letter, assuring them that if they ask for this wisdom by faith, that God will grant it to them. Surely the same can be said for us who are in Christ today. What a wonderful promise! This wisdom, James says, is first of all pure—not sullied, double-minded. or double-tongued. That’s how it comes to us from above—as pure.

And it has its effects among us. What are the telltale signs? It’s peaceable, gentle, open to reason, full of mercy and good fruits, impartial, and sincere (3:17). To get a spiritual handle on these, think of their opposites: warring agendas, strife, refusal to listen, seeking always one’s pound of flesh (and maliciously at that), taking sides based on prejudices, and lying while smiling people in the face. Sounds like hell, doesn’t it? Aspects of hell can often be seen on earth.

But so can aspects of the glory of God’s kingdom. We are to be different, acting not out of fear, hate, timidity, or cowardice, but out of assurance, love, humble self-knowledge, and confidence because of the Captain we follow, who’s already assured the victory, Jesus Christ. He has given us a spirit of power, of love, and self-control, as the apostle told Timothy (2 Tim. 1:7). That’s the wisdom of meekness or gentleness, which is indeed quite powerful in a world of disarray, confusion, and self-centered destruction. This also has vast implications for sharing this good news with others, as James also tells us, but that will have to wait until next time.

Mr. Gerry Wisz is a writer, college instructor, and semi-retired public relations professional who, with his family, is a member of Preakness Valley URC in Wayne, NJ.