Two mutually exclusive religions arc contending for mastery in a life and death struggle within the Christian Church today. One of these is the supernatural rede motive religion known as historic Christianity. The other is a religion which denies the genuinely supernatural character of Christianity and which exalts man as his own savior. It is with this latter religion and its attitude toward the Bible that we are going to deal in this series of articles.

Throughout the history of the Christian Church there have been those who, whether within or without the pale of the Church, have leveled attacks against the Bible. During the eighteenth century, however, the spirit of un belief seemed to become more self-conscious. The reason of man was by many exalted to a place of supreme arbiter and judge of all questions. The supernatural content of the Bible was attacked, and the Bible was considered to be, not a divine revelation, but merely the best literature of the ancient Hebrew people. 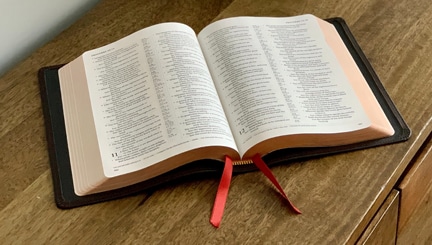 This spirit of unbelief which so greatly characterized the eighteenth century has by no means died out. In fact, although it has somewhat changed its method of approach, it is very much present. A quarter of a century ago there was a loud cry against doctrine. The fatherhood of God and the brotherhood of man, we were told, are the only essential doctrines. Whatever salvation there is can be worked out by man himself. Man is his own hope, and the social gospel is the only gospel that is really needed.

These positions have somewhat changed today. A number of causes have contributed to bring upon the scene a shift in emphasis. The Theology of Crisis has now come to the forefront of attention, and associated with it are kindred emphases. In the realm of biblical studies the schools of form criticism and comparative religion (these terms will be explained in a later article) occupy the dominant position. Today, as perhaps never before, a serious scholar who holds to the trustworthiness and absolute authority of the Bible as a revelation from God is regarded as upholding an utterly lost cause. He is treated as one would be treated who seriously sought to defend belief in Santa Claus.

In the light of this fact we may ask, What about these new emphases? Have not Barth and Brunner and others with them brought about a return to the Reformation? Have they not restored theology to its rights? Is not their work one of the most hopeful signs upon the religious horizon today? For our part we must answer these and art such questions with an emphatic negative. These new teachings have rightly received the designation, “The New Modernism.” They are undergirded by a critical philosophy which is basically at war with the biblical revelation.

There is, however, another charge which must be brought against themIt is their attitude toward the Scriptures. Jesus Christ said, “Everyone that is of the truth heareth my voice” (John 15:37b). The modern theology, however, does not hear Christ’s voice. Rather, it is very vigorous in telling us that the old doctrine of the verbal inspiration of the Scriptures must go. It comes forward with a new interpretation of the Scripture, an interpretation which at first sight seems to be quite in line with the teaching of the Church, but which, upon closer examination, proves to be of one piece with the unbelief of previous days. The hands may be the hands of Esau, but the voice is that of Jacob.

The Attitude Toward the Bible

In discussing the attitude of the modernist toward the Bible, there is one caution that must be observed. We are in no position to tell whether any particular person is or is not a true believer in Christ. God alone knows the hearts, and he alone is judge. Happily, there is gross inconsistency in the position of many. Our study, therefore, cannot be a study of men themselves, but rather of what they write concerning the Bible. What, therefore, is the attitude of the modernistic scholars and theologians toward the Bible today?

One characteristic that applies to much recent study of the Bible is .that men believe the Bible should be approached just like any other book and treated just like any other book. It is perfectly true that this is not ,always explicitly stated, but one gains the impression, after reading many pages of modern works dealing with the Bible, that this is the attitude which their authors have adopted. The Bible, they think, should not be set upon a pedestal and regarded as a book dropped down from heaven. It is an intensely human book, and should be treated as such.

For our part we can have no sympathy whatever with such an attitude. We plan, in future articles, to analyze this position more in detail, but for the present certain remarks may be made. It is wrong to regard the Bible as one would any other book for the simple reason that the Bible is not like any other book. In fact, the evidences of the uniqueness of the Bible are so compelling that he who does not behold them must be blind indeed. The Bible bears within itself the marks of its divinity.

We may thus compare the Bible with God’s revelation of himself in the created universe. “The heavens,” says the Psalmist, “are intensely engaged in declaring the glory of God, and the firmament causes to make known that it is his handiwork.” Thus the heavens and the earth are regarded as preachers who actively call one’s attention to the fact that the hand that made them is divine. He who will not read aright this clear witness of the creation is spiritually blind.

The Bible also exhibits itself as the Word of God. There are several things which show beyond question that the Bible is from God, and we cannot do better than quote the words of the Westminster Confession, “…the heavenliness of the matter, the efficacy of the doctrine, the majesty of the style, the consent of all the parts, the scope of the whole (which is to give all glory to God), the full discovery it makes of the only way of man’s salvation, the many other incomparable excellencies, and the entire perfection thereof, are arguments whereby it doth abundantly evidence itself to be the Word of God” (1:5).

Another assumption that undergirds much modern study of the Bible is the so-called scientific method, which we may describe as follows. “In studying the Bible we must deal with facts which we ourselves can check and control by historical methods. There are many subjects, however, which lie outside the realm of our investigation. They do not lie in the realm of controllable facts, but in what we may call the realm of faith. In this realm it is every man for himself. In this realm belong such questions as the Virgin Birth of Christ, the doctrine of God, and so forth. Our investigation must be limited to those areas which we can ourselves study by historical methods.”

This method sounds very plausible, and it is very widely adopted today. Of course, it finds its philosophical grounding in Kant’s distinction between the phenomenal and noumenal worlds, and it is a method which is basically at variance with the historic Christian faith. What reason is there for this arbitrary distinction, this rigid separation of the areas of investigation? The “scientific” method really seeks to separate the created facts to be investigated from God their Creator. It says in effect that it matters not what one believes concerning God, he may arrive at truth in other areas of investigation. This, of course, is to deny the gospel and the whole scriptural teaching. If God is himself the source of truth, how can a man attain unto truth when he is in basic error about God?

We believe that the “scientific” method is the greatest obstacle to true progress in the biblical field today. Before a man can interpret correctly and understand any historical fact or any area of investigation, he must go to the source of true interpretation, namely God. Unless one first thinks rightly about God, he wiII not think rightly about other subjects. To assume that it is possible to write a true interpretation of the history of Israel when one disbelieves in the Triune God is to proceed upon totally false assumptions.

What have been the fruits of employing the “scientific” method in biblical study? In future articles we shall seek to answer this question by a consideration of numerous examples. Suffice it to say that where the “scientific” method has guided the investigation, the Bible is robbed of its supernatural character, and the easygoing doctrines of a modernism, complacent toward sin, hold sway.

The time is at hand to challenge the fundamental assumptions that have been guiding much biblical scholarship. We who believe the Bible to be the Word of God need not be ashamed of our position. Rather, we should constantly study to become more self-conscious in our Christianity, confident that the God of Truth is on our side. Despite all the learning and ingenuity that have accompanied the employment of the “scientific” method, the ,ruth has not been reached thereby. The religion of modernism, despite the new forms in which it appears, is as vigorous today as ever in its desire to destroy the historic faith. We must meet it by attacking the false presuppositions which undergird it and by setting over against them the true presuppositions upon which our historic faith rests. And this we may do in the confidence that the battle is the Lord’s.

Have you ever stood without an adequate answer before modern critics who declare that the so-called “scientific” method of Bible criticism has destroyed the authority of the Word? Whether you work in an office, attend a university, or wherever you mingle with people from other walks, you have heard the remark, “But the Bible is full of mistakes! Modern investigation has proved it!” The Christian answer to this challenge is presented by “Torch and Trumpet” in this first of a series of articles by Dr. Edward J. Young on the subject, “The Unerring Bible – A Lost Cause?” Dr. Young is professor of New Testament at Westminster Theological Seminary.