LEADER – This season we celebrate in a special way the coming of our Savior-King, Jesus Christ. We will center our thoughts on the truths concerning our Lord which are revealed to us in the song of Christmas found in 1 Timothy 3:16.

PEOPLE – “…the mystery of godliness is great: He appeared in a body, was vindicated by the Spirit, was seen by angels, was preached among the nations, was believed on in the world, was taken up in glory.”

Jesus Christ – Appeared in a Body

LEADER – Soon after the fall of Adam and Eve in Paradise, God in mercy came to them and gave the first promise of a Redeemer from the terrible plight into which they had plunged themselves and all their descendants.

PEOPLE – “And I will put enmity between you and the woman. and between your offspring and hers; he will crush your head, and you will strike his heel” (Genesis 3:15).

LEADER – At different times and in different ways, God repeated the promise of a Redeemer.

PEOPLE – To Isaiah God said, “Therefore the Lord himself will give you a sign: The virgin will be with child and will give birth to a son, and will call him Immanuel” (Isaiah 7:14).

LEADER – To Jeremiah He said:

PEOPLE – “‘’The days are coming,’ declares the Lord, ‘when I will raise up to David a righteous Branch, a King who will reign wisely and do what is just and right in the land. In his days Judah will be saved and Israel will live in safety. This is the name by which he will be called: The Lord Our Righteousness’” (Jeremiah 23:5, 6).

PEOPLE – “But you, Bethlehem Ephrathah, though you are small among the clans of Judah, out of you will come for me one who will be ruler over Israel, whose origins are from old, from ancient times” (Micah 5:2).

PEOPLE – “‘See, I will send my messenger, who will prepare the way before me. Then suddenly the Lord you are seeking will come to his temple; the messenger of the covenant, whom you desire, will come,’ says the Lord Almighty” (Malachi 3:1).

Come, Thou long expected Jesus Born to set Thy people free; From our fears and sins release us; Let us find our rest in Thee.

Israel’s strength and consolation, Hope of all the earth Thou art; Dear desire of every nation, Joy of every longing heart.

Born Thy people to deliver, Born a child and yet a King, Born to reign in us forever, Now Thy gracious kingdom bring. 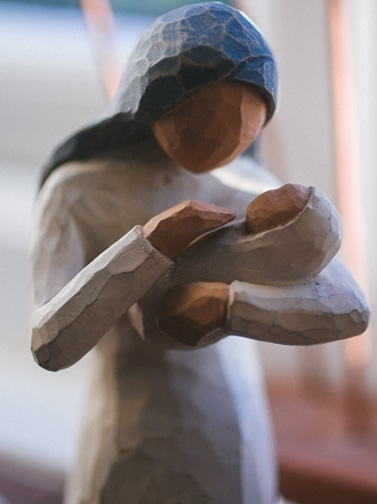 LEADER – At last, after many years had passed, the great day arrived!

PEOPLE – “While they were there. the time came for the baby to be born, and she gave birth to her firstborn, a son. She wrapped him in cloths and placed him in a manger because there was no room for them in the inn” (Luke 2:6, 7).

SONG – JOY TO THE WORLD!

LEADER – The German composer, Franz Gruber, and Joseph Mohr captured the majesty and mystery of this event in their song, “Silent Night.”

LEADER – “And there were shepherds out in the fields nearby, keeping watch oyer their flocks at night. An angel of the Lord appeared to them, and the glory of the Lord shone around them and they were terrified. But the angel said to them.”

PEOPLE – “‘Do not be afraid. I bring you good news of great joy that will be for all the people. Today, in the town of David a savior has been born to you. You will find a baby wrapped in cloths and lying in a manger.’”

LEADER – “Suddenly a great company of the heavenly host appeared with the angel, praising God and saying,”

SONG – ANGELS FROM THE REALMS OF GLORY

Angels from the realms of glory, Wing your flight o’er all the earth; Ye who sang creation’s story, Now proclaim Messiah’s birth. Shepherds in the fields abiding, Watching o’er your flocks by night God with man is now residing, Yonder shines the infant Light.

Jesus Christ – Vindicated by the Spirit

LEADER – Our Lord Jesus Christ the Son of God, appeared on this earth in a body, “in the flesh.” He was also “vindicated by the Spirit” that is, Christ’s position as Son in the Godhead, was attested to publicly and confirmed by the Holy Spirit. Already in the Old Testament, Isaiah prophetically affirms this “vindication” in the third of four Servant Songs in which the Servant is none other than the Messiah, Jesus Christ.

PEOPLE – “Because the Sovereign Lord helps me, I will not be disgraced. Therefore have I set my face like flint, and I know I will not be put to shame. He who vindicates me is near. Who then will bring charges against me?” (Isaiah 50:7, 8).

LEADER – The Holy Spirit publicly vindicated Jesus at His baptism, the opening of His public ministry.

PEOPLE – “And as he was praying, heaven was opened and the Holy Spirit descended on him in bodily form like a dove” (Luke 3:21, 22).

LEADER – In His final discourse, Jesus Himself referred to His vindication, His defense by the Holy Spirit when He said:

PEOPLE – “But when he, the Spirit of truth, comes, he will guide you into all the truth…He will bring glory to me by taking from what is mine and making it known to you” (John 16:13, 14).

LEADER – Paul tells us that the Spirit vindicated Jesus in His resurrection:

PEOPLE – Jesus Christ, “…as to his human nature was a descendant of David…and through the Spirit of holiness was declared with power to be the Son of God by his resurrection from the dead” (Romans 1:3, 4).

LEADER – Paul also identifies the Holy Spirit as the Spirit of Christ when he says:

LEADER – May Jesus Christ be present in our hearts and lives today through the indwelling of His Spirit!

Come Thou Incarnate Word, Gird on Thy mighty sword; Scatter Thy foes. Let Thine almighty aid Our sure defense be made, Our souls on Thee be stayed, Thy wonders show.

Come Holy Comforter, Thy sacred witness bear In this glad hour. Thou who almighty art, Now rule in every heart; And ne’er from us depart, Spirit of power.

LEADER – On a number occasions, Jesus was “seen by angels” and ministered to by them. Angels attended His birth.

PEOPLE – An angel of the Lord announced Christ’s birth to the shepherds and “suddenly a great company of the heavenly host appeared with the angel, praising God and saying: ‘Glory to God in the highest, and on earth peace to men on whom his favor rests’” (Luke 2:14).

LEADER – The angels ministered to Christ in the time of temptation.

PEOPLE – “Then the devil left him and angels came and attended him” (Matthew 4:11).

LEADER – The angels sustained our Lord in His agony in the Garden.

PEOPLE – “He withdrew about a stone’s throw…knelt down, and prayed, ‘Father, if you are willing, take this cup from me, yet not my will but yours be done.’ An angel from heaven appeared to him and strengthened him” (Luke 22:41–44).

PEOPLE – “There was a violent earthquake, for an angel of the Lord came down from heaven and, going to the tomb, rolled back the stone and sat on it” (Matthew 28:2).

LEADER – Angels were on hand to greet and worship our Lord when He returned to heaven, having ascended from earth.

PEOPLE – “Then I looked and heard the voice of many angels, numbering thousands upon thousands, and ten thousand times ten thousand. They encircled the throne and the living creatures and the elders. In a loud voice they sang, ‘Worthy is the Lamb who was slain, to receive power and wealth and wisdom and strength and glory and honor and praise!’” (Revelation 5:11, 12).

LEADER – Angels will come with our Lord when He returns.

PEOPLE – “When the Son of Man comes in his glory, and all the angels with him, he will sit on his throne in heavenly glory” (Matthew 25:31).

Jesus Christ – Preached Among the Nations

LEADER – Paul reminds us in I Timothy 3:26 that Christ is to be preached to the the Gentiles. Hosea was already given this vision.

LEADER – Paul defines that relationship of the Gentiles to Christ in Ephesians 3:6:

PEOPLE – “… through the gospel, the Gentiles are heirs together with Israel, members together of one body, and sharers together in the promise in Christ Jesus.”

PEOPLE – “If you belong to Christ, then you are Abraham’s seed, and heirs according to the promise.”

Hallelujah to the Lord of lords, who is the great “I Am.”

Jesus Christ – Believed on in this World

LEADER – Paul, in I Timothy 3:16 assures us that Jesus Christ will be believed on in the world. We know that is true because Christ Himself guaranteed success in the proclamation of the gospel to the nations.

PEOPLE – “All authority in heaven and on earth has been given to me. Therefore go and make disciples of all nations, baptizing them in the name of the Father and of the Son and of the Holy Spirit, and teaching them to obey everything I have commanded you. And surely I am with you always, to the very end of the age” (Matthew 28:18–20).

Jesus Christ – Received Up into Glory

LEADER – Our Lord was received up into glory. Acts 1:1–11 tell the story from the point of view of the disciples on earth. Revelation 5:4–13 tell the story from the perspective of the inhabitants of heaven as they welcomed Him back to His heavenly home. Read these passages for your instruction and inspiration. How shall we respond to God’s wonderful gift of His Son?

PEOPLE – “Therefore, since we have a great high priest who has gone through the heavens, Jesus the Son of God…let us hold firm to the faith we profess…Let us then approach the throne of grace with confidence, so that we may receive mercy and find grace to help us in our time of need” (Hebrews 4:14, 16).

All Scripture quotations used in this litany are taken from the New International Version.