The beginning of the seventh plague has a familiar ring to it. By way of review, the plagues are organized into three cycles with three plagues in each cycle, and the tenth plague standing alone as the final act of judgment against Pharaoh and the false gods of Egypt. The first plague in each cycle begins the same way: plagues one, four, and seven began with Moses going to Pharaoh in the morning and standing before him. The fact that Moses stood before Pharaoh speaking for God; declaring both God’s demand and the consequences for rejecting God’s demand, should be understood from a military perspective. It is significant that Moses continued to stand against Pharaoh, but the Egyptian magicians were no longer able to stand before Moses and Aaron. The plagues represented the conflict between the one true living God and the false gods of Egypt.

The plagues were the result of God’s direct intervention. Through the use of the plagues, Jehovah was confronting Pharaoh and the false gods of Egypt. The conflict was coming to a climax, which was reflected in the extended warning that Moses proclaimed before Pharaoh. For the first time, some of the Egyptians listened to Moses and the warning that he proclaimed in the presence of Pharaoh.

This is the first time that God provided an opportunity for individual Egyptians to avoid the consequences of a plague. “Bring your livestock and everything you have in the field to a place of shelter, because the hail will fall on every man and animal that has not been brought in and is still out in the field, and they will die” (9:19).

Judgment From the Sky

The fact that the last series of plagues employed the firmament against Pharaoh and his people is significant. It is critical to remember that the Egyptians believed that their gods were personified in the elements of nature. The fact that judgment poured down from the heavens made a mockery of the heavenly deities of Egypt. This certainly included Nut, the female representative of the sky; she represents the vault of heaven. Shu was the supporter of the heavens who held up the sky; and Tefnut was the goddess of moisture. All three gods or goddesses were exposed in the seventh plague. We see the folly of idolatry, and also the bondage of sin and the affects of the fall. It was only reasonable that all of Egypt would acknowledge Jehovah before He destroyed them, yet they failed to do so.

God Shows Less Restraint with the Last Series of Plagues

God threatened to unleash the full force of His plagues against Pharaoh and Egypt. God had restrained Himself, but that was about to change. God would use less restraint in the next cycle of plagues. Moses warned Pharaoh that Jehovah could have unleashed a plague that would have wiped him off the face of the earth, but instead God had raised Pharaoh up and sustained him for this very purpose. The purpose was given: “I have raised you up for this very purpose, that I might show you my power and that my name might be proclaimed in all the earth” (9:16). 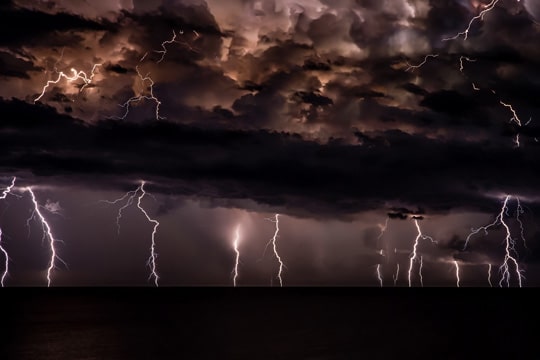 On a practical level this means that no one can stand against God, unless God sustains him in his rebellion. It also means that God is able to judge and save according to His sovereign will. We should have no doubt that in God’s time the wicked will be judged, and likewise in God’s time the elect in Christ will see and experience the fullness of their salvation. One should never doubt God’s willingness or His ability to judge the reprobate, and likewise his willingness and His ability to save the elect. There is no power in heaven or on earth that can thwart either His judgment or His salvation. Both are equally ultimate.

The attack against Pharaoh and his people came because God was revealing Himself to all men through His mighty acts. All men would know that there was no one like Him in all the earth, that His name might be proclaimed in all the earth.

This is exactly what the psalmist commands us to do. “Praise the Lord. I will extol the Lord with all my heart in the council of the upright and in the assembly. Great are the works of the Lord; they are pondered by all who delight in them. Glorious and majestic are His deeds, and His righteousness endures forever. He has caused His wonders to be remembered” (Psalm 111:1–4).

Every time we gather for public worship we are doing what the psalmist commanded us to do. In the assembly of God we are remembering His wonders, His great works, His glorious and majestic deeds. As we reflect upon His great work and His goodness we are sensitized to the fact, that we too are objects of His great work and His glorious deeds. God has elected us in Christ to be His sons and daughters instead of His enemies. If you know Christ, then you know the Father, and you know the benefit of His saving work, and therefore you should be anxious to acknowledge His glorious work, and likewise you should also be anxious to acknowledge His authority over you.

This stands in contrast to Pharaoh. In the first meeting between Pharaoh and Moses, Pharaoh claimed in defiance that he did not know Jehovah. In time Pharaoh would acknowledge Jehovah, but it would not take place until Jehovah had thoroughly defeated and humiliated Egypt and her false gods, including Pharaoh.

A Warning To Egypt

The seventh plague contains an extended warning. For the first time the Egyptians were told how they could avoid the coming judgment. Some of the Egyptians listened to Moses. They feared the word of God. Up to this point, the only distinction that had existed was been between the Hebrews and the Egyptians. But now, God was making a distinction within Egypt between those who feared God’s word and those who scoffed at God’s word. God was claiming and calling the elect from the world as His own. Everyone that belonged to God feared the Lord. This reminds us of the midwives in chapter one. Pharaoh had commanded the midwives to kill the infant Hebrew boys, but to allow the girls to live, “The midwives, however, feared God and did not do what the King of Egypt had told them to do, instead they let the Hebrew boys live.”

The reason why the midwives disobeyed Pharaoh’s word and obeyed God’s word had to do with the fact that they feared God. This is also why some of the Egyptians in chapter nine obeyed the warning that Moses had given; they feared the Lord. In contrast, verse 30 tells us that Pharaoh and his officials still did not fear the Lord God. As a result they did not heed the warning; instead, they rejected God’s word in unbelief.

The Psalmist tells us that the fear of the Lord is the beginning of wisdom. The foundation for true wisdom begins with the proper knowledge of God and the proper attitude toward God. In the book of Exodus the fear of the Lord and the fear of God’s Word are associated with reverence, respect, and even worship. The fear of God’s word in this context indicates that God had a people that He was calling out from Egypt. For the first time we see that God is making a distinction within Egypt between His people and Pharaoh’s people. There are Egyptians that Jehovah had claimed as His own; they feared Him and they honored Him.

This plays out in Exodus 12, where Moses describes the hasty departure of the Hebrews. Many other people went with the Israelites. The other people were the God-fearing Egyptians. They identified with Israel and with Israel’s God. In time, many of them would have undergone circumcision, making them members of Israel. The ingrafting of the God-fearing Egyptians into Israel was a foreshadowing of the future ingrafting of the gentiles that would take place following the ministry of Christ.

“Remember that at that time you were separate from Christ, excluded from citizenship in Israel and foreigners to the covenants of the promise, without hope and without God in the world. But now in Christ Jesus you who once were far away have been brought near through the blood of Christ…. Consequently, you are no longer foreigners and aliens, but fellow citizens with God’s people and members of God’s household, built on the foundation of the apostles and prophets, with Christ Jesus himself as the chief cornerstone” (Eph. 2:12-13; 19-20).

Paul is teaching that Gentiles have been grafted into Israel. Believing Gentiles are now members of the covenants of promise, through Jesus Christ. Believing Gentiles were no longer aliens, but fellow citizens with God’s people and members of God’s household. The ingrafting of the Gentiles is foreshadowed in the seventh plague. Just as God claimed a remnant from Egypt at the time of the Exodus, likewise God has claimed a people from the Gentile nations, and He is actively calling them out.

In summary, through the plagues we see how God is sovereign over the various elements of nature including the water, the land, and the heavens. As the plagues progress from one plague to another we see an intensification of God’s wrath. The plagues will be unleashed on the earth again at the end of this age. This time there will be a further intensification of the plagues. They will be even more severe than the plagues associated with the Exodus. In the book of Revelation John writes, “From the sky huge hailstones of about a hundred pounds each fell upon men. And they cursed God on account of the plague of hail, because the plague was so terrible” (Rev. 16:21). At the end of the age we will see God’s wrath poured out upon this earth and the reprobate; but we will also see God’s salvation. God will make a distinction between His people and the people belonging to the seed of the serpent.

We should be comforted in the fact that God saves. He did more than just make salvation possible; He actually saves us. Our salvation is definite. In John 6 Jesus says, “For I have come down from heaven not to do my will but to do the will of Him who sent me. And this is the will of Him who sent me, that I shall lose none of all that He has given me, but raise them up at the last day” (John 6:38,39).