\We are now ready to discuss the third foundational principle underlying IRBC’s philosophy of counseling: God sovereignly superintends over the Spectrum of Environments,™ using them at times to specifically create problems in people’s lives.

This principle is largely what one of the domains within the Secondary Dominant Domains™ is built upon. The domain being referenced is the Environmental Domain.™ This domain, along with the Production Domain,™ constitutes the Secondary Dominant Domains™ (SDDs) in IRBC’s model. The SDDs, along with the Primary Dominant Domains (PDDs). are featured in the diagram below. The PDDs are, as you will notice, the Spiritual Domain,™ the Mental Domain,™ the Emotional Domain,™ the Social Domain,™ and the Bodily Domain.™ Please review the following diagram, which was featured in the previous issue of The Outlook, to assist you in more firmly grasping a philosophical model of biblical counseling that will enable you to properly view man as a complex being.

Introduction to the Environmental Domain

As was said earlier, the foundational principle under our consideration is mostly concerned with the Environmental Domain. The Spectrum of Environments introduced via this principle has to do with both the type and size of environment God uses to bring about problems. IRBC’s conception of the various types of environments is similar to what is called the milieu in the world of secular psychology. The term “milieu” is defined by the Merriam-Webster dictionary as “the physical or social setting in which people live or in which something happens or develops.” While we see some value in this definition, the spiritual component is not addressed. This is obviously problematic, for the astute Christian knows that things do not happen or develop in a spiritual vacuum. The spiritual realm has a direct impact upon the other two realms which IRBC recognizes within the Environmental Domain. 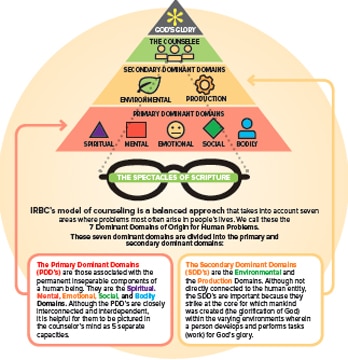 The three types of environments that IRBC’s model takes into consideration when discussing this domain are the spiritual, natural or physical, and social realms, respectively. We’ll spend a little time getting introduced to these three realms.

The Spiritual Realm™ takes into account the spiritual condition of the home, church, workplace, school, state, nation, and various environments wherein counselees live, work, and regularly interact. Particular attention is focused, via interviewing, upon the negative effects that living or working in poor spiritual environments may be having on the counselee during the data-collecting process. Practical prescriptions can later be given on how to stand firm without compromising one’s faith and/or how to properly establish boundaries within the associated negative environment, if applicable. For example, a Christian working in a factory where the “spiritual climate” is exceptionally poor (i.e., blasphemous) may need to establish a boundary between himself or herself and fellow employees by going to his or her car instead of the break room for lunch and/or coffee breaks.

While primary consideration is given to environments such as the home and workplace when making counseling-related evaluations and applications associated with this realm, it is also important that counselors look at the broader spiritual environment in light of the increasingly perilous times in which we live.

Satan and his demonic horde are actively impacting our culture and world and will do so with increasing measure the nearer we come to the second return of our Lord and Savior Jesus Christ. It seems that the times in which we live call for Reformed believers to gain a more thorough understanding of the doctrine of angels (angelology) for a couple reasons. First, neither our historic, Reformed confessions and creeds nor respected Reformed systematic theology texts provide a thorough treatment of the subject. Second, many popular church leaders are training the masses to deal with the demonic in ways that are not prescribed in Scripture. Such aberrant teaching has caused a great deal of trouble in the lives of Christians in our day—trouble that may bring some of them to you for counseling.

It is our opinion that many of the problems within the lives of Christians that currently originate in this realm are mostly the result of aberrant teachings wherein misinformed believers interact with Satan and the demonic in a way that finds no warrant in Scripture. In What the Bible Teaches About Spiritual Warfare (Grand Rapids: Kregel, 2000), authors Robert Dean and Thomas Ice suggest that when Christians engage in aggressive campaigns against Satan they open themselves up to demonic oppression. They say the following: “When believers go on the offensive against Satan, they are stepping out of their legitimate bounds by becoming involved with situations that the Lord has never intended for them.”

Dean and Ice maintain that the proper way for Christians to deal with Satan is to function in more of a defensive mode. More specifically, the believer is to resist the attacks of Satan and the demonic by “standing firm.” Citing the flight of Israel from Egypt as an example, they say the following:

As the Israelites followed the Lord’s command to leave Egypt, they were followed by Pharaoh and all of his chariots and cavalry and infantry. Pharaoh represented the greatest military establishment at that time, and he threw everything he had against the Israelites. This threat surely overwhelmed them and struck fear in their hearts—a situation not very different from the Christian who is the target of Satan. When the Israelites in their fear accused Moses of bringing them out of Egypt to be killed, Moses demonstrated the kind of attitude and action that Christians are to have in spiritual warfare: “Do not fear! Stand by (histemi in the LXX) and see the salvation of the Lord. . . . The Lord will fight for you while you keep silent” (Exodus 14:13–14). As they obeyed and stood firm, the Lord delivered them first by opening up the Red Sea as a path of escape and then by drowning the army of Pharaoh in the waters as they closed back on them.

In the December 3, 2010, edition of Ligonier Ministries’ Table Talk magazine, the author of the devotional section touches upon an aspect of the subject we have embarked upon. In his entry he mentions binding demons, a practice that is often associated with the earlier mentioned “campaigns against Satan.” While speaking about spiritual warfare in the context of the battle that occurred between the prince of the kingdom of Persia and Michael (one of the chief princes mentioned in Daniel 10:13), he first notes that Western Christians have become more interested in spiritual warfare in the past few decades. He writes, “Bestselling novels have depicted battles between the armies of heaven and the forces of hell, and scores of teachers have addressed the subject.” He goes on to say, “Many of these works refer to ‘territorial spirits’ who have charge over certain countries or empires, and Christians are often encouraged to ‘bind the demon of [insert name of city or country]’ to help advance God’s kingdom.” He begins to conclude the article by asking, “What are we to make of all this?” and then provides the following threefold answer:

First, we should acknowledge that there is real conflict in the heavenlies and that we are wise to be knowledgeable about those areas on earth that suffer from spiritual oppression and bondage. Second, even though there are regions that are especially hostile to the gospel and likely ruled by particular evil beings, demonic powers are no match for the hosts of heaven . . . Finally, we must recognize the reality of spiritual warfare without overemphasizing the abilities of Satan and his minions. Though Scripture might recognize the existence of “territorial spirits,” we are never told that we must “bind them” or pray directly against them for the work of the gospel to be effectual.

We’ll conclude this section by reflecting upon words of wisdom from the prince of preachers as they apply to the “people piece” of this negative component of the spiritual realm, for this is the element with which will be dealt with most often as you counsel. In one of his Faith’s Check Book devotional entries based on Exodus 23:22, Charles Haddon Spurgeon spoke of one of the blessings associated with the promise God fulfills when his children obey his commands:

The Lord enters into a league with His people, offensive and defensive. He will bless those who bless us and curse those who curse us. God will go heart and soul with His people and enter in deepest sympathy into their position. What a protection this affords us! We need not concern ourselves about our adversaries when we are assured that they have become the adversaries of God. If Jehovah has taken up our quarrel, we may leave the foemen in His hands. So far as our own interest is concerned we have no enemies; but for the cause of truth and righteousness we take up arms and go forth to conflict. In this sacred war we are allied with the eternal God, and if we carefully obey the law of our Lord Jesus, He is engaged to put forth all His power on our behalf. Wherefore we fear no man.

May God give us the grace we need to stand firm in the faith that was once and for all time delivered to the saints, knowing that the battle belongs to the Lord and He will be victorious!