It is sometimes said, and it is said by good men, we do not now, under this economy, observe the Sabbath as strictly as was required of the people of Israel under the Old Testament. This statement of the case needs examination, and careful distinction must be made if we are to assess it properly. There is an element of truth in it. But there is also a good deal of error. It is true that certain regulations, both preceptive and primitive, which governed the observance of the Sabbath under the Mosaic law, do not apply to us under the New Testament. In Israel it was distinctly provided that they were not to kindle a fire throughout their habitations upon the Sabbath day (Exod. 35:3). It was also enacted that whosoever would do any work on the Sabbath would be put to death (Exod. 35:2).

Now there is no warrant for supposing that such regulatory provisions both prohibitive and punitive bind us under the New Testament. This is particularly apparent in the case of the capital punishment executed for Sabbath desecration in the matter of labor. If this is what is meant when it is said that observance is not as strict in its application to us as it was under the Mosaic law, then the contention should have to be granted. It must be said, however, that this would be a rather awkward and inaccurate way of expressing the distinction between the Mosaic economy and the New Testament economy in respect of Sabbath observance. For, recognizing to the fullest extent the discontinuance of certain regulatory provisions in the jurisprudence of Israel under the law of Moses, we may still ask quite insistently: What has this to do with the strictness of observance?

The force of this question can be made more obvious if we think of the regulatory provisions of the Mosaic law governing the observance of other commandments of the decalogue. There were regulations in connection with the other commandments, regulations which we have no want to believe apply to us under the New Testament. For example, in respect of the fifth commandment, it was provided that the man who cursed father or mother was to be put to death (Exod. 21:17; Lev. 20:9). In respect of the seventh commandment, it was provided that the adulterer and the adulteress were to be put to death (Lev. 20:10). Now, however grievous these sins are, we do not believe that the sanction by which they were punished under the Mosaic law is applicable under the New Testament. Such provisions of the Mosaic law are so closely bound up with an economy which has passed away as to its observance, that we could hold to the continuance of these provisions no more than we could hold to the continuance of the Mosaic economy itself.

And so it is to confuse the question at issue to speak of observance under the present economy as “less strict” than under the Old Testament. As in the case of the other commandments, it is the fulness of New Testament revelation and redemptive accomplishment that serves to confirm the sanctity of the Sabbath institution and the strictness of observance demanded of us. The only way whereby the logic of this conclusion could be controverted is by driving a wedge of sharp discrimination between the fourth commandment and the other nine. And this is a position which the proponents of less strict observance have not been successful in proving. 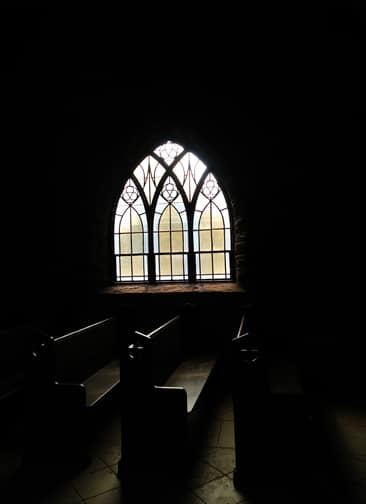 This word of Jesus was spoken in a context, and the context always determines the meaning of what is said. Jesus was vindicating and defending the doing of certain things on the Sabbath day. If we examine the context we shall find that the works defended and approved by Him are not works of every conceivable kind; they are works which fall into certain categories. These categories are indeed very instructive -they are the categories of piety, necessity and mercy. A work of piety, that is, work connected with the worship of the sanctuary, is in view when He says, “Or have ye not read in the law, how that on the Sabbath days the priests in the temple profane the Sabbath, and are blameless” (Matt. 12:5). A work of necessity is referred to when He says, “Have ye not read what David did, when he was ahungered, and they that were with him; how he entered into the house of God, and did eat the showbread, which was not lawful for him to eat, neither for them which were with him, but only for the priests” (Matt. 12:3, 4). That is to say, dire necessity warranted the doing of something which under normal conditions would have been a culpable violation of divine prescription and restriction. And a work of mercy is in view when He says, “What man shall there be among you, that shall have one sheep, and if it fall into a pit on the Sabbath day, he will not lay hold on it, and lift it out” (Matt. 12:11).

It is this service of mercy which Jesus then, in the most conspicuous way, exemplified when He said to the man with the withered hand, “‘Stretch forth thine hand.’ And he stretched it forth; and it was restored whole like as the other” (Matt. 12:13). It is in reference to such works of piety, necessity and mercy that Jesus says, “Wherefore it is lawful to do well on the Sabbath days,” and, more specifically, it is in reference to the work of mercy illustrated by drawing a sheep out of a pit, and exemplified in the concrete situation by His own miracle of healing the man with the withered hand.

The occasion upon which Jesus spoke all these words was the criticism which the Pharisees brought against the disciples for satisfying their hunger by eating from the standing grain on the Sabbath day. Jesus defended His disciples against this censoriousness, which arose, not from insight into the design of the Sabbath, but from the sophistry by which rabbinical tradition had perverted the Sabbath institution and had turned it into an instrument of oppression and hypocrisy.

It is true that we must guard against the encroachments which proceed from pharisaical imposition. This is self-righteousness and will worship. It completely frustrates the divine design. The Sabbath was made for man and not man for the Sabbath. When we encumber the institutions of God with the accretions of our own invention, we not only pervert His law but we impugn His wisdom and usurp His authority. We make ourselves lawgivers and forget that there is only one lawgiver. Not only the wisdom but the holiness of God is reflected in what He has not required, as well as in what He actually demands. If we add toHis law, then we suppose ourselves to be better and wiser thanGod. And that is the essence of impiety and lawlessness. We must not, however, fall into the snare of libertinism because we want to avoid the Charybdis of pharisaism. The opponents of Sabbath observance and of its complementary restrictions like to peddle the charge of pharisaism when efforts are made to preserve the Sabbath from desecration and to maintain its sanctity. We should not be disturbed by this type of vilification. Why should insistence upon Sabbath observance be conspired pharisaical or legalistic? The question is: Is it a divine ordinance? If it is, then adherence to it is not legalistic any more than adherence to the other commandments of God. Are we to be charged with legalism if we are meticulously honest? If we are jealous not to deprive our neighbor unjustly of one penny which is his, and are therefore meticulous in the details of money transactions, are we necessarily legalistic? Our Christianity is not worth much if we can knowingly and deliberately deprive our neighbor of one penny that belongs to him and not to us. Are we to be charged with legalism if we are scrupulously chaste and condemn the very suggestions or gesture of lewdness? How distorted our conception of the Christian ethic and of the demands of holiness has become if we associate concern for the details of integrity with pharisaism and legalism! “He that is faithful in that which is least is faithful also in much: and he that is unjust in the least is unjust also in much” (Luke 16:10). Why then should insistence upon Sabbath observance be legalism and pharisaism? This charge can appear plausible only because our consciences have become insensitive to the demands of the sanctity which the ordinance entails. The charge really springs from failure to understand what is the liberty of the Christian man. The law of God is the royal law of liberty and liberty consists in being captive to the Word and law of God. All other liberty is not liberty but the thraldom of servitude to sin.

Sanctity of the Commandments

Sanctity of the Sabbath Commandment

This ordinance rests upon the divine example. The cycle and sequence established for man in the division of time into weeks rests upon the sequence which God followed in the work of creation. We may speak of the Sabbath as the memorial of God’s rest, the rest of delight and satisfaction in work accomplished. “And God saw everything that he had made, and, behold, it was very good” (Gen. 1:31). In the Christian economy the Sabbath is the Lord’s Day and therefore the memorial of the completion of a work of God greater than that of creation. It is the memorial of redemption completed by the resurrection of our Lord from the dead. It is altogether appropriate that the recurring seventh day of rest should now memorialize the rest from the labor involved in the working out of redemption upon which our Lord and Redeemer entered when He was raised from the dead by the exceeding greatness of the power of God.

We, according to His promise, look for new heavens and a new earth, wherein dwelleth righteousness (2 Pet. 3:13). There remaineth therefore a Sabbath keeping for the people of God (Heb. 4:9). The weekly Sabbath in the divinely established sequences of temporal history is the constant reminder to us of the beginning and the end. And for the people of God it is the foretaste of that eternal rest which was secured by redemption once for all accomplished and will be dispensed in redemption consummated. The perpetual relevance of the weekly Sabbath resides in the divine plan of history and of destiny, and with its perpetual relevance goes its perpetual obligation. Is it superfluous to be reminded of the words of the prophet? “If thou turn away thy foot from the Sabbath, from doing thy pleasure on my holy day; and call the Sabbath a delight, the holy of the Lord, honorable; and shalt honor him, not doing thine own ways, nor finding thine own pleasure, nor speaking thine own words: Then shalt thou delight thyself in the Lord; and I will cause thee to ride upon the high places of the earth, and feed thee with the heritage of Jacob thy father: for the mouth of the Lord hath spoken it” (Isa. 58:13, 14).

Dr. John Murray was a beloved professor at Westminster Seminary in Philadelphia for many years.