People, old as well as young, often tell me they don’t like history at all.

Of course not, when we remember how it is too often taught in schools. Teachers demand that the pupils memorize an endless array of persons, events and dates which have little meaning for our everyday life. Even some Christian teachers fail to make clear its inner meaning and coherence, even though several scholars have written excellent introductions to a Biblically responsible philosophy of history. Without this, the Bible is reduced to a series of isolated stories containing little more than some moralistic lessons.

History, according to Scripture, begins in the highest heaven which since the days of creation until the final judgment experiences its own kind of history.

As heaven is filled with dramatic events, so their reverberations echo throughout the centuries here on earth. In all this there is neither chance nor fate. All is executed and will finally be consummated to the glory of our God. Indeed, we cannot comprehend the divine laws operative in the events. But living by the Word, we can trace the hand of our God in happenings all around us. And for the consolation of believers John is privileged to set forth what is necessary for us to know.

The opening of the seals, vs. 1

Do not overlook the opening statement. Without it we cannot rightly understand the rest of this vision. Center stage is again occupied by the Lord Jesus. Unless we see Him clearly, we miss the point of the scenes which are sketched. Soon we will feel ourselves left alone in a chilling world full of sound and fury without meaning.

Again He is called the “Lamb.” Only because He, throughout His earthly ministry, fulfilled God’s will for our salvation can He now as our Mediator and Redeemer control all things even to the tumbling of sparrows from the rooftops. On the scroll whose seals are broken open, also the smallest events are included. Far too often we tend to forget this. History, although we cannot trace all its details, is a finely-woven tapestry in which every stitch and thread occupies its proper place. And the church which realizes this will sing enthusiastically for its comfort:

Come, Thou incarnate Word, Gird on Thy mighty sword; Scatter Thy foes. Let Thine almighty aid Our sure defense be made, Our souls on Thee be stayed; Thy wonders show.

Now these “wonders” will follow each upon the heels of the preceding. Appropriate, too, that one of the “four living creatures” summons John to look and learn.

The horses and their riders, vss. 2,3

Few animals in that realm of almost endless variety have caught people’s attention throughout the years as has the horse. With its beauty and strength it still charms many. Nor should its flexibility of movement be overlooked. When tamed and trained by men, the horse proves highly serviceable in a remarkable number of ways. The Bible, however, ordinarily speaks of it in connection with war. For journeys in those days people used the donkey; for breaking up the soil the ox.

In Revelation we will hear much about horses. 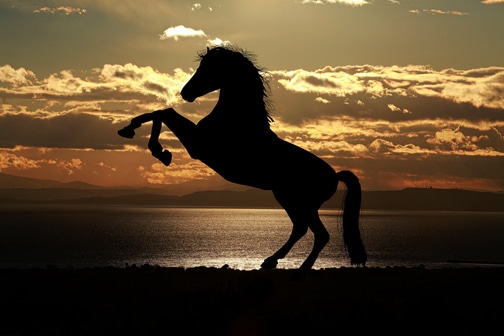 While said to be able to find their way back to the stable even when riderless, they are useful only when guided by a horseman. Without such no horse ever won a race or brought victory.

For the Biblical background of this section we should turn to Zechariah 1:7–17. Returning to a desolate land after seventy years in Babylonian exile, the Jewish people were disheartened. To encourage them the Lord informs them in a “vision” that He controls also the heathen nations around them. He sends out four horses with riders to patrol the earth. The riders then report back to the “angel” who commissioned them. Nothing, you see, escapes the attention of the sovereign God.

“Four,” pointing definitely to the length and breadth of the earth on which we live, with their riders are sent out. It is the “Lamb” who lets them loose, not chance or some inexorable natural law. Strange, isn’t it, that many claiming to be Christian see only a sweet and loving Jesus. To be sure, He is that. But He is also the One coming even now to judge in righteousness and truth. Without confessing this, we grievously dishonor Him.

The first one rides a “white” horse. The color symbolizes victory. He holds a “bow” and “was given a crown.” With these he goes forth conquering and to conquer. Often the bow depicted military prowess and power (Hebr. 3:9; Zech. 9:13), widely used in battle in a time without guns and tanks. From afar such a rider could strike terror into the hearts of his enemies. This one’s march is described as eminently successful.

Many commentators see here a symbol of Christ conquering by means of the gospel. But hardly does this scene agree in its relation to the preceding. What we find in chapter 19, where our Lord is clearly identified, differs markedly from what John describes here. Far more consistent is interpreting this rider as the rise and spread of imperial power. Throughout the ages, often increasingly, strong rulers have subjugated peoples and nations for their own prestige. In this light the other riders with their highlycolored mounts become far more understandable. In them we see the terrifying consequences which follow in the wake of such conquest

The first of these is “war,” the color “red” hardly needing explanation. For centuries battlefields have been stained with the blood of men and animals. This one “takes peace from the earth.” Now “men slay each other.” This may well include civil wars, revolutions and riots which become endemic in seasons of war. While the first rider holds a bow, this one wields “a large sword” used in hand-to-hand combat.

Immediately a third horse with its rider looms into view. Here is a “black” horse with the rider “holding a pair of scales in his hand.” This, too, is one of the evil fruits of imperial lust for power. Economic dislocation follows upon war to bring fearful distresses especially upon the poor while leaving the rich largely unscathed. Even now food is often sold by weight. Thus “wheat” sufficient to feed a family of four will, as war is waged, cost a full day’s wages leaving nothing for other necessities. But the “oil” and the “wine” — not as essential for life — may not be damaged. Although in John’s day these two commodities were widely used by all except the abjectly destitute, spiraling inflation as a concomitant of war’s disruptions made these luxuries available only to the rich.

Most dreadful of all is that fourth horse with its rider. Its color is “pale” (“ehlaras,” a sickly, livid, greenish hue). Here “Death” rides along with “Hades,” the abode of the dead, following close behind.

All four are given “power over a fourth part of the earth.” Notice first that none has power of itself. Divine judgment upon a sinful mankind is still held in restraint. Here, is not, the wrath poured out to the full. Nor are all the victims killed in the same manner. Some by the sword, others by famine or pestilence resulting from war or wild beasts.

These afflictions, so inseparable a part of the story of mankind, call to mind the plagues which God through Moses visited upon Egypt. In some of those not only the Egyptians but also the Hebrews, already burdened under Pharaoh’s yoke, suffered. And throughout the period from Christ’s first to His second coming believers will also be involved in the events here described. For the ungodly they are judgments which presage the final judgment; for the godly they are chastisements (2 Cor. 1:3–7; Hebr. 12:6–11), intended to strengthen their faith, purge their lives and awaken a stronger longing for their final deliverance. The Bible speaks plainly on all this.

1. Why do some who should know better see Christ as sending only “blessings” but Satan and his henchmen sending wars?

2. Why is it wrong to tell Bible stories in isolation from God’s great work of salvation?

4. In which Egyptian plagues did the Hebrews also suffer? Can you suggest a reason for this?

5. Mention some “modern” empires which for a time inflicted great hardship, pain and death.

6. What about “innocent victims” like little children? Doesn’t that conflict with our God as loving and just?

7. Why, in the light of both chapters 5 and 19, is it highly unlikely that the first rider is Christ?

8. Since God sends wars throughout the centuries, is it not wrong for Christians to work for world peace? Explain.

9. Why is “death” depicted in such a strange and revolting color? Doesn’t it often come as peace at the end of much suffering?

10. Explain your understanding of “a fourth part.” Is this a statistic to be demonstrated in specific events?