With the apostle we have stood at the boundary between time and eternity. The fifth and sixth trumpets have sounded. Now we think ourselves prepared to learn about the final judgment. Surely sin can not sink to any lower depths than the stubborn impenitence and rebellion acted out by mankind in the face of the Lord’s warnings. What more is there really to tell?

But surprisingly the scene changes.

And this change is highly necessary for our comfort when all the foundations of our earthly existence seem to be shaking. Can the people of God, washed in the Savior’s redeeming blood and heirs of the everlasting kingdom, continue safe in such a wicked world? If so, why and how? To this the apostle addresses himself in the scenes which he is shown in chapters 10 and 11. Clearly these two belong together.ln all their afflictions the Lord provides what they need to be sustained and strengthened. At the same time, and this will become increasingly evident throughout the next three lessons, they are called to demonstrate their faithfulness to Him. With this our attention is called to the church. While it experiences difficulties and distresses, it is never absolved from its duties. All this, largely in symbolical language, Christ now “shows” to John for our instruction.

Here He appears on the scene. He is “the messenger of God’s covenant.” In His hands He has a little book. Without it those who are in covenant with the Lord cannot live in a world so filled with sin and sinners. It is held out by Him. It is to be used as He commands.

As soon as the scene shifts, our attention is called to “another mighty angel.” This one is coming “down from heaven.” As a messenger he reveals something of the mighty acts of God to the apostle. But at the same time he gives orders. 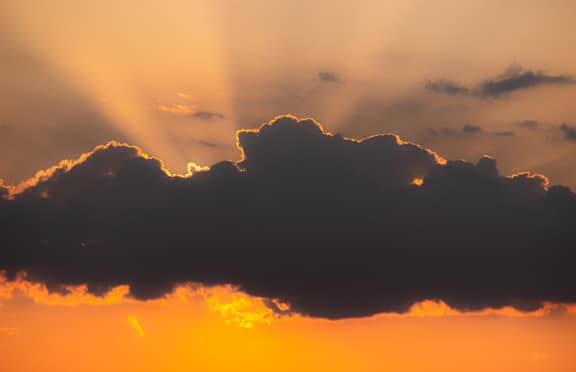 He is described in great and graphic detail. For most angels mentioned in this book that is unusual. This one’s garment is a “cloud,” reminding us at once of the manner in which our Savior departed from the earth (Acts l:9f.). Above His head John beholds a “rainbow,” reminiscent of that glory which surrounded the heavenly throne (4:3). So bright is His visage that it shines like the “sun.” But still more is mentioned. His “legs were like fiery pillars” (1:15,16). So strikingly similar is this description to that found in the first vision which John receives, that the mighty angel seen here can only be our glorified Savior and Lord.

He now plants His feet to cover both the sea and the land. And small wonder, since the control of every person, nation and event has by divine decree been delivered into His hand as the One who alone is “worthy.” Several commentators, including the well-known evangelical Morris, argue that this cannot be Jesus Christ. Other angels. he claims, are also described as manifesting some of this glory. John does not “worship” here as he did in the first vision. And where, so runs the reasoning, do we find that Christ ever “swears an oath” (vs. 6)? We need only turn to Hebrews 6:13 to defuse this assertion. “And when God made a promise to Abraham, since he had no one greater by whom to swear, he swore by himself, saying …”

The evidence becomes even more compelling as we read further. This angel holds “open in his hand” that which He will deliver to John. lt is “a little scroll.” We read of such a writing earlier in Revelation (ch. 4,5). But the contrast between the two is sharp. The latter clearly contained, written as it was both within and without, the full counsel of the sovereign God. Only the “Lion” who is also the “Lamb” was found worthy to break open its seals. But here is a “little” one, far smaller in size and not containing everything contained in the other. Soon John will explain for us what it contains. But first the emphasis falls on the fact that it is “open.” It contains all that God Himself is pleased to make known to His servant John and through him to his readers and hearers. But before this “little book” is identitied, strange things happen.

Unexpectedly this angel. our Lord Jesus, utters “a loud shout like the roar of a lion.” And who would not tremble when He opens His mouth in this way? The “roar” produces “seven thunders.” The apostle at once realizes their significance, for he “was about to write.” Lenski suggests, and correctly we believe, that when the scenes in this book unveiled themselves John engaged in writing what he was seeing and hearing. He was ordered to do this. Only so would the details be precisely written down for the church of all ages.

But surprisingly, he is forbidden to do this now. Instead, he must “seal up” this vision. This order had also been given to Daniel who received a vision of Christ in His Old Testament manifestation at the river Hiddekel. Some of what that prophet saw might not be disclosed (Dan. 10:5,6; 12:7). So, too, Paul when caught up to the third heaven was forbidden to make known what he saw and heard there (2 Cor. 12:1–4). Privileges given to some of His servants are by God’s appointment not to be shared with all.

Although the content of the “seven” remains hidden, something can and should be said about them. Thunders already sounded in connection with judgments when Jesus Christ opened that first scroll. Then, too, the number used here is important. It points to fulfillment, perfection or completeness in its kind. We are not wrong when suggesting that these “thunders” speak of judgments so frightening towards the end of the world that the church does not need to know about them. But why they remain hidden is no where indicated. To pry curiously into their “mystery” would be disobedience.

But there is an announcement which is revealed. This mighty angel “lifts up his hand and swears.” This he does by, in relation to, and with appeal to the eternal God who is truth. It serves to establish and confirm the word which he announces. “There will be no more delay!” This translation is somewhat misleading. The word used is “time” (“chronos”) as it has been ticking in clock~like fashion since Genesis 1:1. Sometime and somehow that will stop. And why? Because “the mystery of God will be accomplished.” Again another decisive word. The verb used incorporates the Greek word for “end” or “goal” nelos”) so frequently employed for special occasions in God’s dealings with the world. In the Bible, “mystery” speaks of that which was hidden from the human mind and eye but is now revealed by God to and for His believing people.

This is the explanation of history as it involves sin, grace and judgment. And the angel declares that with the “seven thunders” everything planned from eternity “will be accomplished.” In the vision it is spoken of as already done, even though its fulfillment which cannot be thwarted by anything or anyone is for the first readers and us still in the future. That assurance is what the true church in its struggles and strivings needs so much every day. We need not know or understand all that happens. Rather. peace of mind and heart come by simple trust in the One who holds all things in His hand. Also. when the thunderclouds of God’s dealings with mankind hang heavy over our heads. we can sing to strengthen ourselves and each other.

When peace like a river attendeth my way, when sorrows like sea~billows roll. Whatever my lot, Thou hast taught me to say: It is well, it is well with my soul.

The angel with the cloud and the rainbow is not finished with John. Some of this is mentioned here. Far more will be explained in the next chapter. It concerns first of all this apostle but then also the true church of the Lord Jesus Christ throughout the entire period from the Savior’s ascension until His coming at the end of the ages.

Not only is he given this “little scroll.” He must also “eat it.” Since it is an “open book,” he can read and know and understand its content. But this is not sufficient for the commission he receives. This eating reminds us at once of a long passage in Ezekiel (Ezek. 2:8–3:3). This can teach us much about John but also about anyone called to bring God’s Word. So thoroughly must its message be assimilated that it fills with power and persuasion the one under orders from Christ.

But that message is by no means always pleasant and pleasing. As with Ezekiel’s call, this scroll must be proclaimed in its fullness. And it includes woes, lamentations and indescribable sufferings. Indeed, because it is a message filled with grace, it is “sweet as honey in the mouth.” But it also turns the stomach “sour.” The aftertaste is bitter. Obeying this, he is told, “You must again prophesy about many peoples and nations and tongues and kings.” Not only will the apostle learn far more about this before these visions are finished. He must also “prophesy” about them. This he will be doing as Revelation is written down and handed to the angels of the “seven churches.”

Will that “prophesying” die out when fohn and his first readers pass away? Will people be able to re~ ceive such a word from God which is both “sweet” and “bitter”? As the next chapter makes plain, that commission given to the last of the twelve apostles has by Christ’s orders been handed down to the faithful church in every generation. But the pathway will often be one of stress and suffering.

1. Who do you believe this mighty angel is?

2. How will this chapter give comfort to God’s people?

3. What were “scrolls” like in John’s day? How were they opened and read?

4. What happens to minds and hearts which “speculate” about what God has not been pleased to reveal?

5. How does John’s “office” differ from that of the angels to the seven churches and from that of preachers ever since?

6. Why does Christ here “straddle” both land and sea?

7. Does Christ send His message to a person or nation because it is somehow better than others? Prove your answer from Scripture.

8. Why did Daniel have to “seal” part of his message? Why is no reason given here?

9. Discuss in detail what can be learned from the Ezekiel passage.

10. What happens when preachers speak only the “sweet” and not the “bitter” parts of the Bible to their people?