The first “woe” has passed in visionary form! Now we are to learn about the second. It is a war the like of which has never been described on the pages of history.

War, of course, has been endemic since the beginning.

Satan started it by attacking the Lord God and the race, when he tempted Adam and Eve in Paradise. Soon afterward Cain killed his brother Abel (Gen. 4:8). By the time of Noah the entire earth was filled with violence. And although that first world perished, the spirit of rivalry, enmity and cruelty continued. Nor did the coming of the Lord Jesus as the Prince of Peace cause conflicts to cease. Rather, He taught that these would surely continue until the end of time. But here is war of unimaginable proportions, something far exceeding the horrors of any racial genocide or of World Wars I and II.

Wars always presuppose and include far more than men and military weapons. Supporting these are the propaganda machines which whip the people into frenzy. Multitudes of civilians are enlisted to supply what armies desperately need. Nobody in an embattled nation completely escapes its consequences. All these are also involved in what John now sees and describes. We do well to avoid entirely “spiritualizing’” this conflict or reducing it to the purely “physical.” Later in Revelation the conflict will be mentioned again. Although introduced with much symbolical language, it is very real and factual. Because of its place within the trumpet series, it may well be one or a series of specific events close to the very end of history. It does seem to usher in the sounding of the seventh trumpet.

As the sixth angel sounds his trumpet, John hears a voice coming from “the horns of the golden altar.” The speaker was standing “before God,” in closest proximity to the throne from which the world is ruled. On such an altar incense was burned by the priests to symbolize the prayers of both people and priests. The “horns” were of one piece with the altar itself and “blood was sprinkled” on them (Exod. 30:2,10; Lev. 9:7f.; 16: 16; Ezek. 43:20). If those horns were cut off, the altar itself would be useless (Amos 3:14). All this pointed forward to the ministry of our Lord Jesus who by His atoning sacrifice opens the way for our prayer and Himself intercedes for us. Here the blood of Christ, which speaks more graciously than that of Abel (Hebr. 12:24). calls for vengeance on all His and our foes. 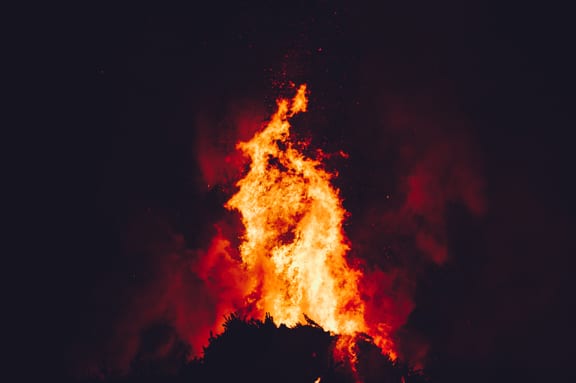 To accomplish that ministry this “voice” resounds with its orders.

As these scenes in Revelation unfold before our eyes, we tend to lose our way when failing to recognize the connections. Likely this will be especially true in the next chapter. But the “story,” the drama which John sees of the mighty acts of God, is a unity. And this is always and only found in the Lord Jesus Christ. Throughout, He is the conquering King. Not only angels but also devils, contrary to their evil nature, perform His will.

The angels at the Euphrates, vss. 15, 16 Christ’s command now comes from “the horns of the altar. It concerns four angels who are still bound as John sees them. They must be released. They are at the river Euphrates, the largest stream in the middle East. For Israel it served as the boundary between the lands over which David as a type of Christ ruled and the great heathen world. In John’s day it was also an important boundary for Rome. These “four angels” are said to be holding in check the innumerable and unimaginably fierce troops which will engulf the whole world.

They “had been kept ready” for precisely this work. Under the Lord’s control their times and circumstances are regulated for the coming of His kingdom. They are, without doubt, “evil angels,” straining at their bonds until they are allowed to open the way for the hordes which will do devastating work. The apostle informs us why they are let loose. As mounted troops, a cavalry numbering 200,000,000 (a symbol for 10,000 times 20,000), they will “kill a third of mankind.” Even when this happens, the end is not yet. This we should remember when studying chapters 16:12–14 and 20:7–9 together with what Ezekiel prophesied about “Gog and Magog.”

Now in symbolical language we receive a picture dreadful enough to fill the hearts of all who take this message seriously with fear. While both horses and riders are mentioned, the emphasis falls on the horses.

Strangely colored “breastplates” cover both. But the “heads” of these horses were like those of the lion, ready to seize and tear its prey to pieces. Out of their mouths “came fire, smoke and sulfur.” All three are associated with war and its consequences. In this way the first readers also could form some picture of what John saw. But the destruction they wreak cannot be fully described. What happens is called “a plague,” but one far worse than all those visited upon stubborn Pharaoh and Egypt. Power is in their “mouths,” possibly the noises and stenches which spring from them. But “the tails” again do the actual killing. These are like “snakes” always subtle and death-dealing like vipers which strike unawares. What, then, shall we make of all this? Here certainly is some kind of warfare which carries with it a deadly “plague.” Thus there is a physical aspectmen do have bodies—which may not be entirely ruled out. But there is also far more. Note the description itself and those serpent-like tails. Hence a purely literal and physical interpretation does the vision grave injustice. Note as well the comparison with the “locusts” in the preceding scene. They “tormented” people; these as horses “kill” them.

Here, but from a somewhat different perspective, is what John records in chapters 16 through 20. All nations with their kings of several kinds are involved. Well may World Wars I and II be thought of as faint forerunners of this coming conflict. But this one will be far greater and more destructive in its effects. A legitimate question may be raised at this point. Why does John give us a threefold description of what seems to be the same judgment instead of putting all this together in one? First, of course, because . this was the way the Lord Christ revealed it to him. Also, by putting all the details together the picture might be too complicated for our understanding. Thus, if the emphasis does fall on one single event towards the very close of world history, this picture in chapter 9 may well be a “pointer” to the even greater catastrophe to come.

The “letting loose” is precisely dated as “this very hour and day and month and year.” Had it already begun? John does not say. How long will it last? No one then or now can know. But in it we again behold the Lord Christ beginning with increased vengeance to avenge His saints who suffer so much distress and even death at the hand of their enemies. These who bring distress shall by no means escape. Already David sang of this in Psalm 2.

Wherefore do the nations rage, and the people vainly dream, That in triumph they can wage Anointed they deride, and the rulers plotting say, Their dominion be defied; Let us cast their bonds away.

All such shall surely perish; not one can or will es” cape when divine wrath is unleashed.

Every war, dating far back into the story of man-kind, has been terrifying. Far greater and more universal, however, will be this one. As it breaks out, the rulers with their followers still insist on “breaking the bonds” by which the ruler of the nations and peoples has bound everyone under his sway. Take careful note of the “sins” which are said to proliferate on every side. These arose within the human heart at the first transgression. Like noxious weeds they have spread throughout the earth among all nations, bearing evil fruits also where the Word of the Lord has been vigorously proclaimed. Not only among civil rulers and their populations but also within the church do we find leaders with their fol” lowers ignoring or trying to explain away what the Bible condemns as plainly abhorrent to God. By this, too, individuals, communities and even nations bring judgment upon themselves.

More swiftly than ever before the world is ripening like a “wine harvest” for the pouring out of God’s wrath upon sinful mankind. Warnings from above are still being sounded. But among those who sell themselves to Satan’s service we find little evidence of repentance. Both tables of the divine law, which is good and righteous altogether, are ridiculed as out”of-date and trampled underfoot. But the Lord Himself will have the last “laugh” (Ps. 2:4–6) not of amusement but of zeal to the praise of His all-glorious name.

“The wages of sin is death, but the free gift of God is eternal life in Christ Jesus our Lord” (Rom. 6:23) The truth of the first part of this passage is clearly demonstrated here; the second part with its victory comes into view in the next sections.

1. Find some Bible texts (there are a few) which tell about Satan’s rebellion against God. Also about the angels which fell with him.

2. Explain how most people in World War II were involved in that conflict. How did this differ from earlier wars?

4. How do you evaluate those who find in this chapter and also in other prophecies mention of tanks, bombs and supersonic spaceships?

5. Why does Jesus’ blood also call for avenging? What about all those, including Jews and Muslims, who deliberately refuse to confess Him as the divine-human Savior?

6. Discuss in some depth “the altar of incense” in the Old Testament. Why is it important here?

7. Can you discover any comfort in this passage for us? What was the purpose of a “breastplate,” also for Christians (d. Eph. 6)?

8. Why cannot these be ordinary and well-trained horses?