“He made Him who knew no sin to be sin on our behalf, that we might become the righteousness of God in Him.” — 2 Corinthians 5:21

He Knew No Sin

This verse has been falsely interpreted to say that Jesus had no knowledge of sin. Jesus knew very well what sin was. It was all around Him during His stay upon this earth. He was well aware that all the people around Him were filled with sin and had upon them the infirmities of sin. He was aware that those before Him and those who were yet to be born were all guilty of original sin and that they would fall into the snares of the devil throughout their lives. He was aware, as we are, that the wages of sin is death and all have fallen short of the glory of God.

All, that is, but Jesus. That is not to say that Jesus was not tempted. Satan himself tempted Jesus in the wilderness. Satan tried to get Jesus to stumble using the people of the church, using the very people He healed, using even the disciples. But—praise God—it did not work. Even when He was on the cross, with nails driven through His hands and feet, Jesus chose to forgive rather than to curse His accusers. Jesus did not sin. He never fell short of the glory of God. The punishment of death, due to fall upon every human being because of their sin, would never have to fall upon Jesus. He was “tempted in all things as we are, yet without sin” (Hebrews 4:15).

Made to Be Sin

Second Corinthians 5:21 goes on to teach that the One who knew no sin was made to be sin. Taken in context, both the Hebrew and the Greek words for “sin” can also be interpreted as “sin offering.” In Isaiah 53 the Servant of the Lord becomes a sin offering (Isaiah 53:10). In Romans 8:3 Paul declares the Son of God to be a sin offering.

Numbers 28 and 29 describe for us the significance of the sin offering. During Passover a male goat was sacrificed to Jehovah as a sin offering to make atonement for the sins of Israel. All the sins of Israel were symbolically placed upon the goat. The goat was then slaughtered by the priest, and Israel’s sins were declared erased. The animal to be sacrificed was to be without defect, spotless, and perfect.

During a particular Passover, less than two thousand years ago, there was a sin offering sacrificed to Jehovah to atone for the sin of all of fallen mankind. When we read the crucifixion account in the New Testament, we see very clearly that Jesus becomes the spotless sacrifice. Neither Pilate nor Herod could find any fault in the Nazarene, yet the priests were insistent that He be put to death. They were responsible for sacrificing the life of the One who knew no sin—Jesus Christ—just as the priests in the Old Testament were responsible for sacrificing the spotless goat in the Old Testament.

The Gospels make very clear that the One sacrificed for the fallen race was without defect, spotless, and perfect. Before His birth, the angel told Mary that the One to be born was holy. The same angel announced to Joseph that the Child to be born would save His people from their sins. In the twenty-four hour period leading up to and including His death, no less than four people declare the innocence of Jesus: the wife of Pilate, who begged her husband not to have anything to do with the blood of the just man; Pilate, who washed his hands and testified he could find no fault in Jesus; the penitent thief at the side of Jesus, who chastised the other thief by declaring Jesus had done nothing to deserve His punishment; and a Romans centurion, who proclaimed Jesus to be a righteous man.

Like the innocent lamb of the Old Testament that was led to the slaughter, Jesus, the Lamb of God, became the holy, spotless, and perfect sacrifice to Jehovah for all our sins. He became the perfect sin offering so that we might become the righteousness of God.

During the first three hours on the cross, while the sun was still shining, Jesus suffered under the hands of men. Although He suffered greatly as He was rejected by the human race, He gave no evidence of self-pity. Instead, He looked down from the cross and saw His mother and beloved disciple standing nearby. He said to Mary, “Behold your son,” and to John, “Behold, your mother” (John 19:26, 27).

He looked at the great crowd gathered all around Him and heard their taunts of hatred and blasphemy. He could have called ten thousand angels to destroy them. Instead, He called to His Father to forgive them (Luke 23:34).

During those daylight hours, He heard the prayer of the thief asking, “Jesus, remember me when You come to Your kingdom.” Jesus immediately answered that prayer: “Today you shall be with Me in paradise” (Luke 23:42, 43).

Jesus suffered greatly under the hands of men with the devil throwing everything he could to get Jesus to come down from the cross and not complete the sin offering. What Jesus endured at the hands of men, however, could never put away one single sin, for no work of man is capable of removing sin.

Then we read in Luke 23:44, “And it was about the sixth hour, and darkness fell over the whole land until the ninth hour.” Great, appalling darkness spread over Golgotha. Jesus, who was the Light of the World, was perishing in the darkness of the cross. It was in that darkness that the Father entered into judgment against His Son regarding our sins. In those three hours on the cross, Jesus, alone upon the cross, faced the judgment that our sins deserved. It was then that He was made a sin offering. On the cross, the Son of God was “smitten of God and afflicted.” “He was pierced through for our transgressions; He was crushed for our iniquities.” In the darkness of the cross “the chastening for our well being fell upon Him, and by His scourging we are healed” (Isaiah 53:5). He who was very God of very God was made sin for us as He endured in His inmost being what we would have had to endure for all eternity, had it not been for His mighty sacrifice. It was then that Jesus cried, “My God, My God, why have You forsaken Me?” (Mark 15:34).

The Righteousness of God

The answer to that question that Jesus asked in the darkness upon the cross is this: It was so that, through Jesus, you and I might become the righteousness of God. The condemnation that we deserve was placed upon Him. Our sins are forgiven! All are forgiven who acknowledge that horrible moment in history as taking place on their behalf. Their sins have been placed upon the Lamb of God who takes away the sin of the world.

Several years ago the Lord brought into my life a young girl who had had two abortions. The first was from her promiscuity; the second from a rape she afterwards thought was the wrath of God upon her. She felt that she had put two innocent children to death and that God would not forgive her. As we began walking through the New Testament, she discovered the innocence of Jesus and how He was put to death by sinful men and women. Instead of returning evil for evil, Jesus was willing to forgive the very people who were putting Him to death. Could her sin be worse than that?

After Jesus was arrested in the Garden of Gethsemane, all His disciples fled. Peter eventually gained enough courage to follow closely behind his Master. In the time when Jesus needed moral support the most, Peter became afraid and denied the very One who he had once claimed to be the Son of God. Can our sins be worse than that? Yet, Peter is forgiven—forgiven for denying Jesus, forgiven and declared righteous because he acknowledged the once for all sacrifice of Jesus as being made on his account.

Before his conversion, the apostle Paul persecuted and killed a great number of innocent, believing Christians. He, too, was sought out by Jesus and turned to the cross for forgiveness. After his conversion, Paul preached Christ and Him crucified as the only means of reconciliation with God.

It is because of the death of Jesus Christ, the perfect sin offering, that we can be forgiven and declared righteous. We cannot do it on our own. It is by faith in the atoning sacrifice He made at Calvary and by acknowledging that He who had no sin was made sin for us that—in Him—we become the righteousness of God.

Rev. Wybren Oord recently moved from Kalamazoo, Michigan to serve as co-pastor at the Trinity Reformed Church in Alberta. He is also the editor of The Outlook. 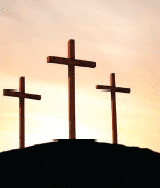