Now it came to pass that a group existed who called themselves fishermen.

And there were many fish in the waters all around. In fact, the whole area was surrounded by streams and lakes filled with fish. And the fish were hungry.

Week after week, month after month, and year after year those who called themselves fishermen, met in meetings and talked about their call to fish, the abundance of fish and how they might go about fishing. Year after year they carefully defined what fishing means, defended fishing as an occupation and declared that fishing is always to be a primary task of fishermen. 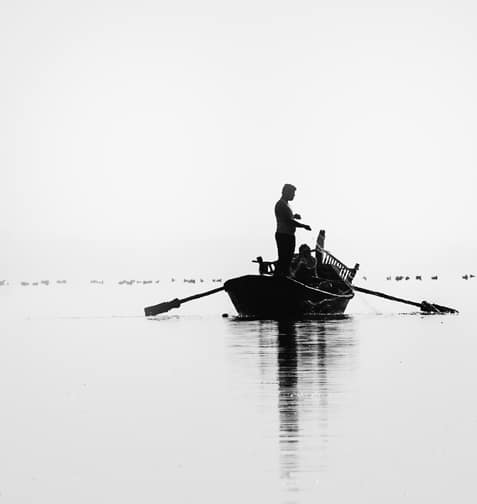 Continually they searched for new and better methods of fishing and for new and better definitions of fishing. Further they said, “The fishing industry exists by fishing as fire exists by burning.” They loved slogans such as “Fishing is the task of every fisherman,” “Every fisherman is a fisher” and “A fisherman’s outpost for every fisherman’s club.” They sponsored special meetings called “Fishermen’s Campaigns” and “The Month for Fishermen to Fish.” They sponsored costly nationwide and worldwide congresses to discuss fishing and to promote fishing and hear about all the ways of fishing such as the new fishing equipment, fish calls and whether any new bait was discovered.

These fishermen built large, beautiful buildings called “Fishing Headquarters.” The plea was that everyone should be a fisherman and every fisherman should fish. One thing they didn’t do, however: they didn’t fish.

In addition to meeting regularly they organized a board to send out fishermen to other places where there were many fish. All the fishermen seemed to agree that what is needed is a board which could challenge fishermen to be faithful in fishing. The board was formed by those who had Also the board hired staffs and appointed committees and held many meetings to define fishing, to defend fishing and to decide what new streams should be thought about. But the staff and committee members did not fish.

Large, elaborate and expensive training centers were built whose original and primary purpose was to teach fishermen how to fish. Over the years courses were offered on the needs of fish, the nature of fish, where to find fish, the psychological reactions of fish and how to approach and feed fish. Those who taught had doctorates in fishology. But the teachers did not fish. They only taught fishing. Year after year, after tedious training, many were graduated and were given fishing licenses. They were sent to do full-time fishing, some to distant waters which were filled with fish.

Some spent much study and traveled to learn the history of fishing and to see faraway places where the founding fathers did great fishing in the centuries past. They lauded the faithful fishermen of years before who handed down the idea of fishing.

Further, the fishermen built large printing houses to publish fishing guides. Presses were kept busy day and night to produce materials solely devoted to fishing methods, equipment and programs to arrange and to encourage meetings to talk about fishing. A speakers’ bureau was also provided to schedule special speakers on the subject of fishing.

Many who felt the call to be fishermen responded. They were commissioned and sent to fish. But like the fishermen back home they never fished. Like the fishermen back home they engaged in all kinds of other occupations. They built power plants to pump water for fish and tractors to plow new waterways, They made all kinds of equipment to travel here and there to look at fish hatcheries. Some also said that they wanted to be part of the fishing party but they felt called to furnish fishing equipment. Others felt their job was to relate to the fish in a good way so the fish would know the difference between good and bad fishermen. Others felt that simply letting the fish know they were nice, land-loving neighbors and how loving and kind they were was enough.

After one stirring meeting on “The Necessity for Fishing,” one young fellow left the meeting and went fishing. The next day he reported he had caught two outstanding fish. He was honored for his excellent catch and scheduled to visit all the big meetings possible to tell how he did it. So he quit his fishing in order to have time to tell about the experience to the other fishermen. He was also placed on the Fishermen’s General Board as a person having considerable experience.

Now it’s true that many of the fishermen sacrificed and put up with all kinds of difficulties. Some lived near the water and bore the smell of dead fish every day. They received the ridicule of some who made fun of their fishermen’s clubs and the fact that they claimed to be fishermen, yet never fished. They wondered about those who felt it was of little use to attend the weekly meetings to talk about fishing. After all, were they not following the Master who said, “Follow me and I will make you fishers of men”?

Imagine how hurt some were when one day a person suggested that those who don’t catch fish were really not fishermen, no matter how much they a claimed to be. Yet it did sound correct. Is a person a fisherman if year after year he never catches a fish? Is one following if he isn’t fishing?