About thirty years ago, Bill and Gloria Gaither wrote a song entitled, “There’s Something About That Name”. The song was about that name that is above every name, that name that is so sweet to the believer’s ear: the name “Jesus”.

In the Bible there are more than one hundred names and titles given to the Second Person of the Trinity. The most familiar are the names we confess in the Apostles’ Creed: Jesus, Christ, Son of God, and Lord.

In the Creed, as well as in the Catechism, the name “Jesus” is mentioned first. It is the personal name of the Child of Mary. It is the name by which the Incarnate God was call in His boyhood. It remained His name throughout all His life. It is still His name today. This name reveals to the believer who the Second Person of the Trinity is. He is our Savior and His name tells us as much. 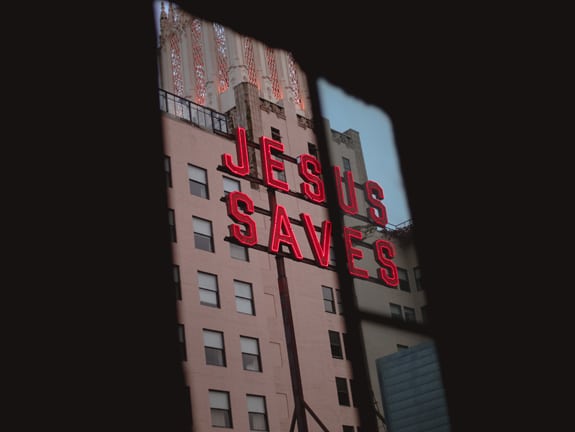 A God Given Name

It is important for us to remember that God the Father gave this name to God the Son. An angel of God was sent to Joseph even before the child was born and told the Nazarene, “You shall call His name ‘Jesus’ for He shall save His people from their sins.’” Heaven had a special interest in this baby. And no wonder! This was the One destined to bring light to those living in darkness and salvation to a world lost in sin and death.

The mission of the Second Person of Trinity is to save. Whatever else the Christ may be: teacher, example, miracle worker, Lord, or King, He is first and foremost Savior. His name means “Jehovah Saves”.

The simple truth that the first section of the Heidelberg Catechism points out is that we are all sinners. If we are sinners, we are unsaved, doomed, and damned sinners. It is from this horrible condition that Jesus came to save us.

He came first of all to save us from our guilt. There is no one who is free from guilt. No one can standbefore the Father in judgment and say, “I am not guilty of sin.” Scripture declares us guilty. Any honest look at ourselves would have our own consciences declare us guilty. We are guilty of sinning against the most holy God and we are in desperate need of a Savior.

In the Gospel of Luke there was a man who was paralyzed. His friends carried him to the place where Jesus was preaching in Capernaum. Unfortunately, the house in which Jesus was preaching was very crowded and they could not get anywhere near Him. An idea entered their minds and the men carried their friend to the top of a house, tore the roof off, and lowered their friend before Jesus.

One might have expected the Great Physician to cure this man physically. And Jesus does heal him. But not before the Savior looked upon the man with compassion and said, “Your sins are forgiven you.” Notice that Jesus did not first tell him to take up his bed and walk. Jesus knew this man’s deepest need was not the ability to walk or to work for a living. His greatest need was the forgiveness of sins!

Isn’t that true of us, as well? Our greatest need is not physical but spiritual. It is the forgiveness of our sins. And the message that Jesus brings – even in the very name that He bears – is that He has provided forgiveness through His own precious blood.

Jesus is a Savior who saves us not only from the guilt of sin but also from the power of sin. Forgiveness of our sins is only part of the work that the Savior came to bring us. Our Savior also delivers us from our love of sinning.

Recently, I read an interesting article in the newspaper about a man the governor of our state had pardoned. This man had been sent to prison several years ago for a crime he had committed. Now his guilt had been cancelled. His past record had been completely blotted out. The reason the article was interesting was because the man was back in jail for committing the same crime again. Even though the governor may have been able to declare this man free from the guilt of past sin, she could not set him free from the power of sin. She could not change his heart.

The moment Paul was converted He asked, “Lord, what would you have me to do?” Through the power of Christ, Paul turned from a persecutor of Christians to a preacher of Christ. No sooner did the seraphim touch the unclean lips of Isaiah than Isaiah says, “Here I am, send me.”

Once we are saved we no longer have the desire to do the works of darkness. Once forgiven by the blood of Christ, we are filled with a desire to live for Christ. Why? Because, as the angel announced to Joseph, He has saved us from our sins. There’s just something about that name.

Question and Answer 29 ends with the words, “It is futile to look for salvation elsewhere.” Very clearly, it is a waste of time to put your hope for salvation in anyone or anything else but Jesus.

The reason that the church must preach Jesus Christ and Him crucified is because the worst thing that could ever happen to a person is for him to die in his sin. All the turmoil that we see in the world around us is due to a neglect of God and the refusal to acknowledge His Son as our Savior.

Many people believe that Christ did His part in the salvation plan on the cross and now the rest is up to us. They think that God’s grace is brought down to a point just above our heads, so to speak, and now all we have to do is reach up and grab it and apply it to ourselves.

If God were to bring His grace to just within our grasp, the hard truth is, in our totally depraved state, not only would we be unable to reach out and grab it, we would have no desire within us to even reach out for it.

Our repentance and our faith are all the power of the Holy Spirit working within us applying God’s grace to our lives. He overwhelms us with God’s love, God’s mercy, God’s goodness, and God’s faithfulness so much so that His grace becomes irresistible to us and we are compelled to respond to His saving work.

Is the salvation that God gives through His Son a real part of your life? Please do not say, “I am doing the best that I can.” The best that you can do is to hate God and your neighbor. Instead, admit that you are helpless and in desperate need of a Savior. And then rejoice, because God has provided one – even His own Son, Jesus Christ.

Rev. Wybren H. Oord is Pastor of the Covenant United Reformed Church in Kalamazoo, Michigan. He also serves as editor of The Outlook.