In the last article, I suggested a list of 8 propositions summarizing what Scripture said about the ministry of mercy. It was (and is) my hope that these propositions would find their way to a Deacon’s Meeting table, and prompt careful Scriptural study and policy review and revision.

In this one, I wish to explore the whole matter of ministering mercy in an age of food stamps, a redesigned but still functioning welfare system and community Food Pantries. Let’s tackle it in the form of a CATECHISM, a series of questions and answers.

Question: Do we even need deacons today? Isn’t a church-based ministry of mercy unnecessary? Doesn’t the existence of such federal and state government resources as described in the previous paragraph render obsolete the old-fashioned practice of diaconal “benevolence” (or, as the Bible calls it, “alms for the poor”)? As one fellow once asked, “Why would I go to deacons and expose my financial crisis when I can go the government without embarrassment?” 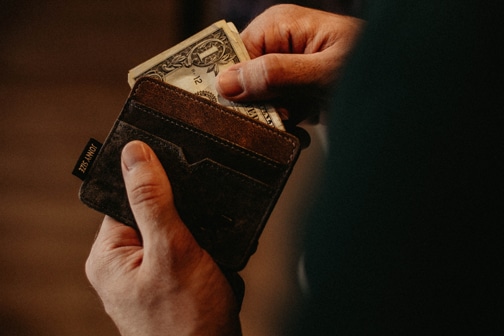 Answer: Never forget that, in Scripture, the goal is never met merely by meeting physical needs, much less meeting those physical needs without embarrassment! Rather, the goal is to witness to the world the love of God, the grace that has been shown to you in Christ and is now shown through you to others. Deuteronomy 15:10–11 makes clear that one of the reasons the “poor will always be with you” is so that the church might always have an opportunity to show what her faith is made of! To be sure, the church COULD refer all cases of poverty to government agencies. In fact, in many places she has become a “broker” of the various agencies, helping people use “the system” to its fullest extent and thus diverting all who come to her door, away from that door to other agencies. But when that happens, what happens to the church’s voice? Where is the church’s witness? We would, in effect, be saying to the world that salvation is to be found, not in the kingdom of God, but in the kingdom of this world!

Question: So you’re saying the church ought to forbid people to accept government assistance of any kind?

Answer: No, I’m not saying that. In fact, as citizens of the land who have paid taxes to our government to fund such programs as Social Security, Medicaid and Medicare, or (in Canada) a comprehensive health care system we receive from God’s hand when we properly use the benefits of such programs. We should help God’s people recognize such and thank Him for His gifts! However, I am saying that in the care of the poor and the defenseless (widows, orphans and single moms) within the church family, just because we CAN refer people to government agencies does not imply that we SHOULD, at least not as the first course of action.

Answer: God’s people (and those who represent God among them, i.e. the deacons) are not only to spring to action “when all else fails.” They should be the first line of defense for the people of God. They should anticipate financial problems, be there at the first sign of troubles that a righteous victim of divorce might face, even going out of their way with generosity of time and money to help people avoid going on the public dole. They ought to do this NOT because the government is inherently evil and because “our local church can solve all the ills in our society,” but rather, because God is honored when we love one another. Aristides reported back to Emperor Hadrian about the Christians he had studied in the early church: “They love one another; they never fail to help widows; they save orphans from those who would hurt them. If they have something they give freely to the man who has nothing. If they see a stranger they take him home, and are happy as though he were a real brother. They don’t consider themselves brothers in the usual sense, but brothers instead through the Spirit, in God” (quoted by Chuck Colson, Presenting Belief in an Age of Unbelief, Victor Books, 1986, pp. 35–36). Remember what Jesus said: The world will “know we are Christians by our love!” Not by our ability to use the welfare system.

Question: So, are we to use government assistance or not?

Answer: I’m not. I mean it sincerely. As citizens of the land, we have rights by virtue of our citizenship, by virtue of our tax payments. And the government and its agencies are, after all, agents of God who put them in their positions of authority (Rom. 13:1–7). As citizens of the Kingdom of God, however, we have the blessed privilege of using God’s generously provided resources to send a mess age of love, to witness to the Lord of grace. When the church won’t help someone it should, it sends the wrong message loudly and clearly! While the church cannot hope to replace the entire governmental welfare system, it also should not be content to hoard its resources and refuse to help the poor merely because government programs exist. In other words, pick your opportunities wisely and strategically.

Question: What do you mean “strategically”?

Answer: I would not think it wise, for example, for a diaconate to decide that “in order to show the love of Christ to the Smith family, we will advise them not to avail themselves of Medicaid for the heart transplant Bill Smith so desperately needs.” To be sure, the diaconate and the congregation must be there to assist the Smith family in many ways: with prayer support, with transportation assistance to and from hospital, with help for the kids, dog sitting, and even financial assistance. At the same time, committing to underwrite such monumental costs as major surgery while refusing aid that appropriately belongs to the taxpayer seems to me to be strategically foolish. In so doing, you strip away your ability to help so many others, and perhaps limit yourselves for years to come. Instead, I suggest you strategically provide the aid that you can in this case and encourage the family to make grateful use of God’s provision through other means. In another case, however, your strategy might be different. If you have a newly widowed woman in your congregation, one without sufficient finances and with no family support available, I believe it would be inappropriate for the local church to refer such a person to government assistance without first trying to meet her needs itself. Not for nothing does God identify Himself as the “God of the fatherless and the widow.” Just because other assistance is available doesn’t allow us to miss the opportunity to say something powerful about who our God is!

Question: So, let me get this straight. The church MUST help wherever the loving character of the Lord is on the line, as in the case of the widowed, the defenseless, the orphan those that He specifically commands us to help.

Answer: I think so!

Question: And the church CAN help wherever and however its help will help to “put feet on the Gospel” so that the world knows what our God is like.

Question: Is there ever a time when the church SHOULD NOT help with resource assistance?

Answer: You bet. The church may not help, even if the government would, where by so doing it would foster the sins of others. For example, the church may not step in to help a widow without first confronting an unwilling family of its Biblical obligations. Paul writes to Timothy (I Tim. 5:3–8) to “give proper recognition to widows who are really in need.” He specifies what that involves, at least part of which is that she must be really alone, without the possibility of family assistance. The church violates this command when it underwrites a widow’s needs without holding the family accountable first. Only in light of persistent and stubborn sin (and, I might add, sin which has incurred the discipline of the church!) on the part of the family, may the church replace it as God’s agents. Another example would be the impropriety of the church providing assistance to an individual who will not work. (Note carefully: WILL not, not CAN not.) If able-bodied people are gripped in laziness, or believe that the world owes them a living, the church AND her diaconate may not encourage them in their sin. Better to cut them off, refuse their request in love, wait for them to fall on their noses, and then be there to pick them up with further rebuke, instruction, and assistance to find a job! Such is Biblical assistance.

Dr. Sittema is pastor of Bethel CRC in Dallas, TX and contributing editor of The Outlook.