The doctrine of the inspiration and authority of Scripture has been persistently relegated to the background in the past half century by many who regard it as of peripheral importance only. And yet here, as in few places else, some of the central issues of philosophy and theology are brought to focus.

There are, basically, three possible answers to the question of an authoritative and inspired Word.

First, it can be held that there is either no God at all, or only a God who remains outside of man’s purview, or a God who does not choose to speak through Scripture. In this instance, Scripture ceases to be the Word of God; man alone speaks, and however highly we rate the Bible, it is the voice of man and of man only.

Second, it can be maintained that Scripture contains the word of God, that both God and man speak creatively, but that God, as the hidden and transcendental one, cannot be identified with the written Word. He is hidden in the Word, speaks through the Word, and encounters man through the Word, and revelation is essentially subjective. Revelation can never be reduced to a set of objective, written truths given in a book.

The third view asserts that while man certainly speaks from beginning to end in Scripture, God alone speaks creatively. Scripture is therefore in the fullest sense of the word the inspired and authoritative Word of God. 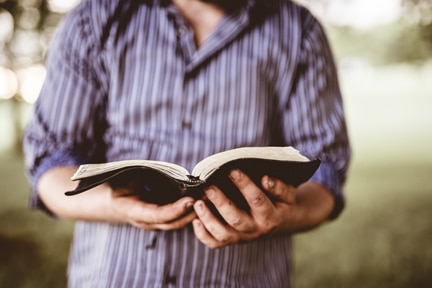 The importance and implications of these three positions cannot be understood without an analysis of their basic presuppositions, and nowhere does this analysis more clearly appear than in the writings of Cornelius Van Til.

The first position, whether it acknowledges God or not, inevitably lapses into relativity and into nihilism. If man alone speaks, and if man alone is the interpreter of life and reality, then man has no standard beyond himself. No attempt to establish a standard escapes the collapse into subjectivity and relativity. Consider, for example, the approach to the Ten Commandments, A man born with an inheritance of Christian morality may drop the first four Commandments and insist on the humanistic validity of the latter six and feel this to be a sufficient and valid basis for life, The question can be immediately raised by one who calls the validity of the seventh commandment into question that humanistic fulfillment requires the abolition of this law, and only an outworn, guilt-ridden, and masochistic psychology keeps men from unshackling themselves, Every Single commandment has at one time or another been dispensed with in some functioning and successful society, and the

Philosophically, man’s every attempt to establish a law or universal likewise fails, Without an absolutely sovereign God and an infallible Word, every universal is inevitably a construct of the human mind. Man’s knowledge of things is both limited and subjective; he cannot establish universals either on the basis of an exhaustive knowledge, for most of reality is a mystery to him, or on the basis of a knowledge of things-in-themselves. His knowledge is only of sensations or of the phenomenal world; reality itself remains unknowable.

Thus, to hold that man alone speaks in Scripture is to destroy not only the truth of Scripture but all truth and to reduce all knowledge to subjectivism and relativism, Man indeed becomes an island in himself, hearing no voice but his own, and committed only to suicide. Nietzsche’s nihilism is the only consistent exposition of this position; every attempt on his part to establish a universal without God and Scripture failed, Not even life could be a universal, because he now had no criterion whereby to call it good, and hence his ultimate counsel of suicide.

To deny God is also ultimately to deny man, and to deny life and knowledge as well, because God is the only creator and sustainer of all things, and without him the only alternative is the negation of all things.

The second position is more commonly encountered. Man and God both speak creatively in Scripture. The Word of God is there, but it is a hidden, subjective Word, appearing only in the divine-human encounter. This point of view is especially common to neo-orthodoxy, although, in varying forms, it appears in other theologies. An infallible Word given by an absolute God is an offense to this position; it is a negation of man and of his freedom; it is a denial of history and of time, The Bible cannot be taken in this sense but only as myth and symbol. Reinhold Niebuhr, for example, insists that the symbols must be taken seriously but not literally, for to take them literally would be to “presuppose an eternity which annuls rather than fulfills the historical process” (Reinhold Niebuhr: Nature and Destiny of Man: Vol. 2, p. 289).

Here the issue is very clearly stated. According to neo-orthodoxy, for God alone to speak creative1y in Scripture, as we believe, is to nullify time and history at the expense of eternity, An infallible Scripture means an absolutely sovereign God who rules all his creation and determines the course of all things. Man’s thinking then cannot be interpretative but only re-interpretative, not creative but rather analogical; man must think God’s thoughts after him and re-interpret time and history in terms of an already established divine interpretation. This orthodox faith challenges man’s claim to autonomy. his desire to be, in some degree, his own god and an independent creature and to have an independent interpretation of reality. Man wants to be a co-worker with God, a junior god, ready to recognize God’s senior status but together to face up to the universe as a common problem which both must work at. History is not determined by eternity but by time, and both God and man must struggle in time to interpret and determine history.

This view wants God, but not an absolute and sovereign God; it wants God to speak, but not more clearly than man speaks. It wants God, but at the price of his self-sufficiency, his very godhood. Man must remain as the central figure on the stage of time, and man’s voice must speak most clearly; God’s voice cannot speak apart from the subjective divine-human encounter. If he speaks in objective truths in a book, in a system of doctrine and a philosophy of history set forth therein, then man’s independence and history’s centrality as the ultimate rather than immediate arena is destroyed. Man can speak apart from God, but God cannot speak apart from man; he is limited to a subjective divine-human encounter.

The transcendental God of neo-orthodoxy is one who is not determinative of history; this is not biblical transcendentalism. As a result, God is as irrelevant in this position as in the first view. Van Til is right in maintaining that basically the issue is between the orthodox Christian view of the self-contained God as the final point of reference and as the only creative speaker, as against the modern view of “the would-be self-contained man who is the final point of reference in all interpretation” (C. Van Til: Intra. to B. B. Warfield: The Inspiration and Authority of the Bible, p. 18).

The third view asserts that God alone speaks creatively in Scripture, and that man, while fully and personally participating in the writing of Scripture, did not participate creatively. God alone creates, determines and sustains all things that come to pass; he alone speaks authoritatively. Eternity determines time. Man’s role is re-interpretative and analogical. But it does not destroy history to make eternity determinative of it, any more than our inability to walk up the side of a wall destroys our ability to walk.

Without the infallible and authoritative voice of God, man can hear no voice but his own; he has no course save relativism and nihilism. No law of contradiction and no universal can survive in a world wherein God does not first of all speak. and speak with authority. History becomes real only because the Scriptures are true and the God of the Scriptures absolutely governs and predestines all things. Man lives in a created world, of created things and created acts. His life therefore is lived in a personalistic universe where he meets God everywhere, because every fact is a God-given, God-determined, and God-interpreted fact. His life and history are therefore meaningful, and he is rescued from nihilism precisely because God is self-sufficient and sovereign and speaks authoritatively and gives man the meaning and interpretation of life.

In all of this, the Bible has a central position. It is not to be used, as Van Til points out, as a source book in biology or as a substitute for a paleontological study in Africa. “The Bible does not claim to offer a rival theory that mayor may not be true. It claims to have the truth about all facts” (C. Van Til: Metaphysics of Apologetics, p. 114). Sinful man can know nothing without the fully authoritative and inspired Scripture. If God does not speak, man cannot speak; he is lost in subjectivity. For Sartre, there is no law-maker other than man himself, and man is therefore trapped in subjectivity and the existence of and relation to other men becomes a problem very inadequately resolved by “inter-subjectivity.” Not only our knowledge of God but our knowledge of all things depends upon an inspired and authoritative Word of God in which God speaks clearly.

The authority of Scripture must rest, moreover, not on man’s testing and approval of it but on God’s priority and God’s requirement of subjection to his authority. When Bernard Ramm, in The Pattern of Authority, defines authority first of all without God and then says we can commence with God, he has said first of all that God’s authority needs validation by man. Man’s authority is assumed and presupposed to be prior and both self-validating and God-validating! When Carnell says, “Bring on your revelations! Let them make peace with the law of contradiction and the facts of history, and they will deserve a rational man’s asset” (E. J. Carnell, An Introduction to Christian Apologetics, p. 73), he puts rational man, regenerate and unregenerate, as judge over God and his Word and sets up a standard of truth above and beyond Christianity itself.

The orthodox view of the authority of Scripture is often rejected as involving circular reasoning; it is charged that it is merely reasoning from God to God, and from the Bible to the Bible. There is no reason in denying this charge. Rather, it must be affirmed that in a vert) real sense all reasoning is circular reasoning. Men move from their basic presuppositions to brute factuality, “facts,” whose meaning is predetermined by their philosophic presuppositions and the subjectivity of their reasoning, back again to their own interpretation. The thinking of the consistent Christian is from God, through God-interpreted and God-given facts, and is valid, though circular or spiral, because it conforms to the nature of reality. All reasoning more or less moves in terms of its basic presupposition, either God or autonomous man, and sees reality in terms of it.

In terms of Scripture, and with Van Til, we must insist that because God created all things, the fun circle of meaning exists only where he is accepted as both creator and interpreter of reality. And these principles of interpretation come only from an inspired. and authoritative Scripture. Ultimately, therefore, all knowledge, and not merely knowledge of God, binges on the doctrine of inspiration, which, accordingly, is not peripheral but central to Christian faith. The alternative is the blind reaches of subjectivity and nihilism.

• This article on the Meaning of Inspiration as well as last month’s contribution on Dictation and Inspiration is taken from a forthcoming volume on By What Standard? This book will appear in late spring or early summer as a Craig publication. Rev. Rousas J. Rushdoony is the pastor of the Trinity Presbyterian Church, U.S.A., Santa Cruz, California.

authority of Scripture, doctrine of inspiration