If Pentecost did not fall on Sunday, the service to commemorate the Spirit’s coming would likely be poorly attended. When the Son comes into the world the church rejoices because it realizes that its redemption must come from him. However, when the Spirit is poured out the church scarcely realizes the importance of the occasion. Even the world has its own celebration of Christmas but is not aware that the Spirit has been poured out. At Christmas there is something tangible. There is a babe, a manger, shepherds, and even angels. On Pentecost there is none of these.

The disciples of our Lord did not look forward to this day. They would much prefer to keep Jesus with them. They knew him. They rejoiced in his presence. The Spirit was still a stranger. Could the Spirit ever take Christ’s place? They doubted it. Yet, Jesus emphasized the fact that it would be profitable for them if he left so that the Spirit might come. They rejoiced in the presence of Christ and rightly so. However, there w ere certain things lacking while Jesus was with them which only the Spirit could supply. Christ is Immanuel-God with us. When the Spirit comes it will be: God in us. Therefore it is profitable for you that I leave. 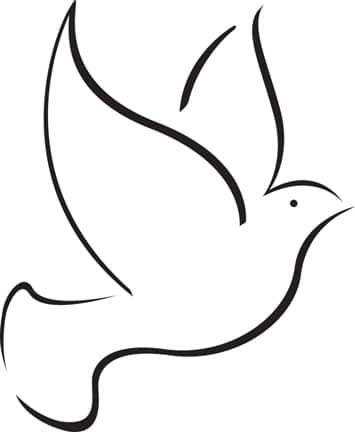 When Pentecost comes the disciples are immediately convinced of the truth of Jesus’ words. What a change! Christ had already changed their lives. He had called them from their nets to become fishers of men. They had preached the Gospel of the Kingdom and had wrought miracles in the name of their Lord. It was a wonderful experience. They had learned much sitting at the feet of Jesus. But, there were still many questions. Much of his teaching was a riddle to them. The Spirit changes them much more radically. They become new creatures.

Almost immediately after the outpouring of the Spirit on the day of Pentecost we hear Peter preach. Where is the former fear? Where is the former ignorance of the ways of God? He preaches the word with power. He not only quotes but interprets prophecy. All the prophecies point to Jesus. This unschooled fisherman holds Jerusalem spellbound. Pentecost has made a greater change in one hour than Jesus’ ministry of three years.

During Christ’s earthly ministry an individual would believe here and another individual would follow him there. The believers were few. Just before Pentecost one hundred and twenty believers were together. After the resurrection Jesus had appeared to five hundred disciples in Galilee. Were there many more? It is doubtful Peter preaches one sermon on the day of Pentecost and no less than three thousand are added to the number of believers. Pentecost had changed the preacher but it had also changed his audience. Yes, says Jesus, it is profitable for you that I leave.

Pentecost is not only a New Testament holiday; it was also celebrated during Old Testament days. This fact brings the Jews together from the various parts of the world. It was an important feast day. It was really the Thanksgiving Day for the Jews. It was one of the three annual feasts when all the male members of the congregation of Israel were to appear before the Lord. The Old Testament Jews brought their offerings to Jehovah on this day in gratitude for the harvest he had given. What a Thanksgiving Day the New Testament Pentecost has become! The sheaves brought into the storehouse of God on the first New Testament Pentecost are of far more value than those brought formerly.

Jesus informed his disciples before his death that when the Spirit came he would lead them into all truth. He would also bring the words spoken by Christ to their remembrance. Even at the time just prior to the ascension the disciples do not understand the nature of Christ’s Kingdom. They are still puzzled by the crucifixion and resurrection of their Lord. But, that is past. “Wilt thou now restore the kingdom to Israel?” Pentecost changes the whole outlook of the disciples. Peter now preaches the “must” which Christ made known to the two walking to Emmaus. The Spirit causes them to understand the gospel.

The work performed by Christ during his earthly ministry does not seem to be very effective when we view it in the light of the influence it had on the lives of the disciples. They loved him. It was the greatest influence ever exerted on them. Yet, it was not the transformation of life which is necessary for the believer. Their redemption was wrought but they didn’t understand it. The Spirit is now come to make Christ’s work effective in the hearts of his people. He will reveal to them how great their misery is; he will cause them to know the only way of redemption; and he will cause their hearts to overflow with gratitude for that salvation. Sorrow fills their hearts when Jesus tells them he will leave. They cannot endure the thought of separation from him. But, the Spirit will bind them much closer to Christ than they have ever been before. In every way it will be profitable for you that I go away so that the Spirit may come.

That first Pentecost of the New Testament was accompanied by strange phenomena. Sound as of a rushing mighty wind and tongues as of fire. Various miracles were wrought by the Apostles. They spoke in strange languages. These phenomena ended when the revelation was complete. However, though these special gifts are no longer present, the importance of Pentecost for today is great.

If today’s preaching of the gospel is Spirit-filled, it will be a mighty power. It will convict the hearts of sinners. It will turn the world upside power. If God’s people are filled with that same Spirit they will be knit together into one body. They will then be a mighty band of witnesses.

Pentecost has introduced a tremendous change. The church, as we know it, was born on that day. It was indeed profitable for the believers that Jesus left the earthly scene that he might send his Spirit. The importance of Pentecost cannot be overemphasized.