On Christmas Eve 1999, a live television broadcast from Vatican City showed Pope John Paul II opening the Holy Door in St. Peter’s Basilica. The Holy Door is the main entrance to the Basilica—a huge double door that is usually locked and sealed. That door is only opened during a Holy Year.

A Holy Year for Roman Catholics is a year only go designated by the pope as a time in which the church offers special blessings and indulgences to her people. Pope Boniface VIll proclaimed the first Holy asYear in 1300. (This Boniface is the one who declared that all spiritual authority in the church and all temporal authority in the state flows from Christ through the papacy.) He declared that Holy Years were to be celebrated every 100 years, but later popes have established a pattern of Holy Years every 25 years.

Originally Holy Years encouraged pilgrimages to Rome, requiring visits of four great basilicas there to earn the plenary indulgence offered. The plenary indulgence removes all obligations to perform the satisfactions associated with the sacrament of penance although the duty of contrition Roman and confession for sins remains. Plenary indulgences are again offered in this Holy Year although ways of obtaining the indulgence exist that do not involve a pilgrimage to Rome.

During the elaborate forms of ceremony of opening the Holy Door, the commentator noted that the Door symbolized Christ. the true door of the sheepfold. But the focus of the ceremony was very much on the literal door and the spiritual advantages of passing through it. Clearly this ceremony and the idea of pilgrimage to Rome highlight several key elements of Roman Catholic piety. It is important to understand that piety because most Roman Catholics experience their faith much more in the practice of piety than in formal theology.

On the positive side, the piety seen in the Holy Door is a piety that recognizes the importance of sin and grace. Such piety acknowledges that humans are sinners, whose sins separate them from God and from eternal life, and that sin must be paid for and taken away. This piety reflects a conviction that grace is necessary for salvation from sin and that grace must come basically from Christ. These positive elements in Roman Catholic piety ought not to be underestimated, and indeed they represent a better piety than that found among many Protestants today who have replaced a discussion of sin and grace with a discussion of psychology and therapy. 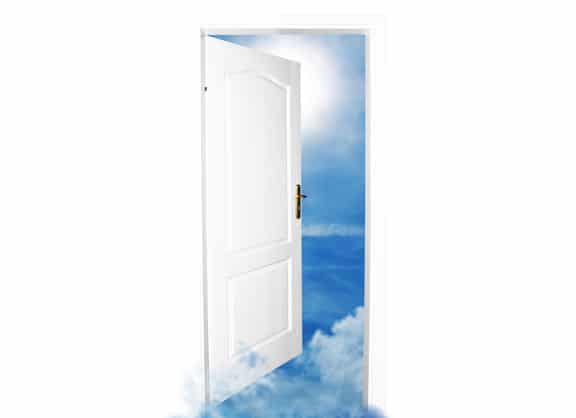 Roman Catholic piety also stresses that grace is available to sinners in many ways and that the practices of the church encourage the pursuit of grace. The services, sacraments and saints of the church all offer help and assistance to the sinner. In that sense Roman Catholicism oozes grace from every pore of the church. It is at this point that the negative side of Roman piety becomes clear. The desire to make grace available in every way possible leads to a piety that introduces practices that go beyond the Bible and that are contrary to the Bible.

Here in the San Diego area, that piety came to expression at about the same time the pope was opening the Holy Door. A local Roman Catholic church had on display the relics of st. Teresa of Lisieux. St. Teresa, also known as the Little Flower, was a Carmelite nun in France. Born in 1873 she entered the convent at the age of 15 and died still very young in 1897. She left behind an autobiography, The Story of a Soul, which showed her pursuit of holiness in the small things of life. After her death, miracles of prophecy and healing were attributed to her and a growing number of Roman Catholics became devoted to her. In 1925 the pope declared her a saint of the church, and in 1926 a large church was built in Lisieux as a place for pilgrims to gather and honor her. In 1947 the church named her as the patron saint of France along with Joan of Arc.

Her relics are contained in a beautiful jeweled reliquary which apparently the church is displaying in various places to encourage devotion to St. Teresa. Local news broadcasts in San Diego showed the reliquary, exhibited under a protective glass covering, and interviewed some of those who had come to venerate the relics. They spoke of how moving the experience was for them and how close they felt to St. Teresa, and through her to God.

Also, late in December, the Los Angeles Times published a front page story on millennial and eschatological expectations within the Roman Catholic Church. This story focused on the excitement in some Roman Catholic circles relative to the “third secret” of Fatima.

Many Roman Catholics believe that in 1917 the Virgin Mary appeared to three children at Fatima in Portugal. She revealed several secrets to them and called on the church to avoid coming disaster by penance, by reciting the rosary, and by devotion to the immaculate heart of Mary. The so-called third secret was sealed and given to the pope, not to be read until 1960. In 1960 Pope John XXIII read the secret, but did not reveal its contents publicly. The continued unwillingness of the papacy to publish the content of this secret has led to speculation that the secret is a prophecy of apocalyptic disaster for the church or the world. The papacy has denied that claim, but the claim continues to circulate and some Roman Catholics have feared that the new millennium would see the fulfillment of the prophecy.

The Holy Door, the relics of St. Teresa, and the revelations of Mary at Fatima all point to key aspects of Roman piety. This piety sees the holy and gracious as tangible, visible and near. Objects and visions can confer grace on the faithful. The divine and holy are not far away and can be approached through a very wide range of actions and devotions which are legitimate avenues of grace.

As moving as these acts of piety are for those who pursue them, they stand against the piety of the Bible. Forms of devotion invented in the fourteenth, nineteenth or twentieth centuries do not have the approval of the Bible nor do they lead the people of God to the Bible for instruction. Rather they distract from the Bible and the simple exercises of piety taught there. Corporate worship, prayer, praise, and studying the Scriptures are the expressions of piety that should typify the people of God. The Roman practices not only go beyond the Bible, but violate the Second Commandment as forms of idolatry.

Those acts of piety are tragic in the second place because they rest on a bad theology of human cooperation. For Rome grace is not the efficacious working of a loving and merciful God who, in Christ, saves His own; rather it is a substance to be gathered in sufficient quantity by human activity to make one right with God. Too easily this piety focuses on human activity and encourages a false sense of security in human accomplishment.

Such piety is tragic in the third place because it detracts from Christ. The Roman Catholic Church may teach that the Virgin Mary, St. Teresa and the Holy Door all point the believer to Christ ultimately, but in reality Christ seems to get lost in the shuffle, or at least recede into the background. God in Christ should not only be the central focus of our piety; He needs to be the only object of our piety. Christian faith must rest in Him alone. There is no insufficiency in His mercy, grace or compassion so that a sinner needs to come to Him through physical, doors or bones or through other meditors.’

Jesus said, “I am the door. If anyone enters by Me, he will be saved, and will go in and out and find pasture. The thief does not come except to steal, and to kill, and to destroy. I have come that they may have life and that they may have it more abundantly” (John 10:9–10 NKJV). Jesus is the only Holy Door. In Him as revealed in His Word His sheep find life. In Him that life is abundant, needing no supplement or addition from other sources. The Christian life is in many ways pilgrimage through this world to life everlasting. But the only door to that life and the only help on that pilgrimage is Jesus Christ.

Dr. Godfrey, editor of this department, is Professor of Church History and President of Westminster Theological Seminary in Escondido CA.