What is your greatest treasure in life? When I was nine years old, I had the privilege of walking alongside, now hall of fame baseball player, Roberto Clemente. And I got his autograph, and I value it as a great treasure. As a nine-year-old it was the greatest treasure I possessed. Today it would be comparable to a nine or ten-year-old (or forty-four or sixty-four-year old, for that matter) having Mark McGuire personally sign and hand to the recipient his autograph.

Into my teenage years, even as a Christian, I came to value things like good grades and basketball. The I met Beth, my wife, and struggled wondering, “Is God most important to me or is this woman I believe God wants me to marry, most important to me?”

Beth and I worked through that struggle, and then we had children. When Steven was born on Father’s Day, I received a wonderful gift from God, and yet I still struggled over who is more important in my life—this newborn Steven or the Lord Jesus Christ?

At different stages and different points in our lives we struggle with good gifts that God gives us. We struggle over valuing and treasuring God’s gifts even more than God Himself. Yet the Bible has a word to describe what we are often tempted to do. It’s called idolatry. We may not fashion and shape a physical idol and/or construct a special place of worship, but we can often be tempted to worship God’s gifts more than God. In fact, we constantly face struggles and temptations to place something or somebody above God. We were made as worshiping beings. God made us to worship Himself. We have a need, even as fallen creatures, to put our hopes and our dreams and our aspirations upon something or somebody. Jesus said, “Where your treasure is, there your heart will be also.” The Bible certainly presents the Lord Jesus Himself as the greatest treasure ever given. If we gather everything that the world has to offer, autographs of every hall-of-famer, riches, success, and we put them all together and compare them to Christ Himself, there would be no comparison.

We need to understand everything God gives us in relationship to the greatest treasure, which is God Himself. That’s part of what Peter is saying in his sermon in Acts chapter 2 at Pentecost. In Peter’s sermon there is Biblical doctrine about the person and work of Jesus Christ.

His Presence, Our Joy

Christ existed from all eternity. He existed as the second person of the Godhead. At a particular moment in time, in the fulness of time, He became incarnate in the womb of the virgin Mary. He was born and He lived a perfect life, and part of His work was obeying the law perfectly so that when He died on the cross as a substitute for sinners like us, He was a worthy substitute. His crucifixion is a central part of His work that God sent Him into the world to do. Three days later He rose again. Even as Peter preached his sermon, summarized in Acts 2, Peter emphasized the resurrection.

Christ is no longer buried in a tomb like David; He is alive. Furthermore, Peter says, the resurrection was not the end. Forty days later “He ascended,” as we say in the Apostles’ Creed, “to the right hand of the Father.” That’s part of the work of Christ. In His triumphant work, He returned to the Father having accomplished all that the Father sent Him into the world to do. Jesus’ final work will be His return. But there is something which happened and is happening between His ascension to the right hand of the Father and His second coming. It is the pouring out of the Holy Spirit upon the church. It started at Pentecost. Jesus in Acts 2 is pictured as the one who receives the Holy Spirit from the Father and then immediately takes the Holy Spirit and pours out this treasure upon the church at Pentecost (Acts 2:33). 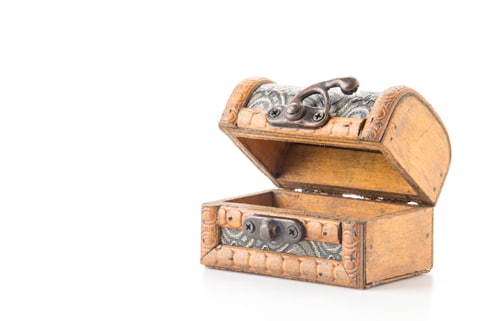 Jesus said in John 14:18, “I will not leave you as orphans. I will come to you again.” Jesus knew that the work He would accomplish in His death, resurrection and ascension would result in His presence with His disciples as they took the gospel to the ends of the earth. As God the Son, fully man, He was limited to one place at one time. And so the way He came to them and didn’t leave them as orphans was through the joyous outpouring of the Holy Spirit.

By the work of the Holy Spirit, not only is Christ where we are, but as Paul said in Ephesians 2, we are seated with Him where He is, spiritually, in the heavenly places as well. So Christ is present wherever we are. But we, through the mystery of the oneness with Him by the Holy Spirit, are also present with the heavenly host. Our worship joins together with never-ending heavenly worship praising Him! We are seated with Christ, present with Him, and that’s the source of our joy and that is our great delight. The King shares His victory as Christ is exalted to the right hand of the Father, He is seated and welcomed as the triumphant King, like a king victoriously coming back from war. And isn’t that what Jesus accomplished when He was here? He came to do battle with sin and with death. In days past, kings went out to fight and wage war and bring back the victory, the spoils, the wealth, the gold, the riches of the conquered kingdom. The king brought the treasure back to His kingdom and was seated on His throne. There was praise and adoration and thanksgiving for the victory that had been won. He fulfilled everything the Father sent Him to do. He completed the purchase of our salvation, and now He is rewarded.

What does He do with the prize? Many people, when they win prizes, think about that choice vacation or home that can be obtained through their riches. Essentially, the temptation can be to spend the money on personal wants and desires. Yet what does Jesus do with His prize? He doesn’t keep it to Himself, but He turns and He pours out this inexhaustible treasure in unceasing measure. And He pours it out upon His church at Pentecost. The greatest treasure ever received is shared with the people of God. It is the means by which we have intimate personal fellowship with God. God Himself comes to live inside us by the Holy Spirit! And we too are to follow in that example of having received so great a treasure, by sharing that treasure with others as we communicate the good news of the gospel. I would suggest that there is no greater treasure in our lives than an intimate, personal relationship with the living God Himself through the Holy Spirit. As we understand that great treasure and heed the words of Jesus who says to us that we’re to lay up treasures in heaven, the only way we can do that is through the power of the Holy Spirit, giving first place to Christ in everything. Then as we begin to look at our family members, our possessions, our vocational calling, our relationships and whatever good gifts God may give us, we realize that those treasures really are the fruit of a far greater treasure, namely the Holy Spirit within us.

How Do We “Hold” Our Treasures?

As we hold our treasures we can belike a child holding a piece of candy. The question is how are we holding the “candy”? Do we have clenched fists that resist being pried open? Or do we have open hands asking our Father, “Am I allowed to have this piece of candy now or not? If you want to take it back from me, go ahead. If you want me to share it with my brother or sister, I’d be glad to.” That perspective comes only if we see that the Holy Spirit who lives in us, who will never be taken from us, is far, far greater by comparison.

Everything must be held in the open palm of our hands before God, received as a blessing and offered back as a living sacrifice to God. Once we lay hold of the power of God’s saving grace in Jesus Christ and understand His work on our behalf, then, in laying hold of that Gospel by faith, He frees us to repent of our sins. The kindness and mercy of God leads us to repentance because we know that this God who sees our sin, as much as we try to hide it from Him, has paid for our sin. We can say, “God, show me my sin that I might be cleansed and forgiven of it. I know that the blood of Christ is sufficient to overcome my darkest and deepest sin. I can repent openly because I know Christ will forgive by His grace.” We are told to lay hold of Christ by repentance and faith. Repentance is not a one-time thing of the past repentance is an ongoing daily practice of saying, “Lord, make Yourself the greatest treasure in my life—You Yourself, not just the good things that You give. May You be the greatest treasure.”

Rev. Mark Dalbey is a minister in the Presbyterian Church in America and is Dean of Students at Covenant Theological Seminary in St. Louis, Missouri.