What do you want Me to do for you?” That was the question Jesus asked twice during His earthly ministry. The first time is found in Mark 10:51. There Jesus addressed a blind beggar outside the gates of Jericho. A noisy crowd had surrounded the Messiah. Yet the cry of the blind man had reached His ears; not only His ears, but His compassionate heart, as well. “Son of David,” the man shouted, “have mercy on me!”

The other place where Jesus is recorded asking this question can be found in Matthew 20:21. A request to Him came from a mother whose two sons were standing beside her. The two sons were fishermen. They had braved many heavy storms, but now they seemed to be hesitating, looking to one another as if to say, “You ask.” The other replies, “No, you ask.”

The Lord sensed that they had something on their hearts. To encourage them He asked, “What do you want Me to do for you?”  Emboldened by the question that Jesus asked, their mother stepped forward, “Command that in your kingdom these two sons of mine may sit, one on your right, and one on your left.” A foolish request, perhaps, but nonetheless one that Jesus was willing to hear and to which He was willing to respond.

In what way does the altar of incense point us to Jesus Christ and the relationship that we have with Him?  It was a small piece of furniture, eight inches by eighteen inches and about three feet high. It was made of acacia wood overlaid with gold.

As we look at the Bible, we find some very interesting ways in which the altar of incense was used. In Revelation 8:3,4 we find the altar used in this way: “Another angel came and stood at the altar, holding a golden censer; and much incense was given to him, so that he might add it to the prayers of all the saints on the golden altar which was before the throne. And the smoke of the incense, with the prayers of the saints, went up before God out of the angel’s hand.”

In Luke, Zacharias “was chosen by lot to enter the temple of the Lord and burn incense. And the whole multitude of the people were in prayer outside at the hour of the incense offering” (Luke 1:9, 10).

These passages indicate that the golden altar of incense pointed to Christ’s intercessory prayers and to the prayers that believers are able to pray because of our relationship with Jesus Christ.

The first altar pointed to the suffering and death of Jesus Christ—the atoning work accomplished once for all while He was still here on this earth. It was made of brass. If you read the descriptions carefully, you will notice that this altar had no crown, but spoke rather of the suffering and the humiliation through which our Lord passed in order to become our Savior.

The second altar was made of gold. It had a gold molding around it, representing a crown of gold extending outward from each corner in the form of a horn. This pointed to the glory and the exaltation of Christ. It pointed to His intercessory work, the work He is doing now as our ascended Lord who is far above all principalities and powers.

The location of the gold altar of incense was also significant. It stood directly in front of the great veil that separated the Holy Place from the Holy of Holies where God manifested His presence. The closest the priests could come to God in daily worship was at the altar of incense.

It is important to notice that the incense of the golden altar was caused to rise up to the heavens by being set aflame by the fire from the bronze altar. Both the bronze altar and the altar of incense point to Christ. The vessels in the courtyard point to what Christ has done for us here on earth. They represent His humiliation. Those in the Holy Place show us what Christ is doing now for His church in heaven. They represent His exaltation. Christ is in glory at the right hand of God the Father Almighty. He is there, still working for His elect.

Christ’s first work was to purge us of our sins—that’s the bronze altar. Now Christ is engaged in His second work. “He is able to save forever those who draw near to God through Him, since He always lives to make intercession for them” (Hebrews 7:25).

John 1:1 reminds us that the Word became flesh. Seventy-seven times in the New Testament the Lord refers to Himself as the Son of Man. While we love to meditate on our Lord as the only-begotten of the Father, full of grace and truth, very God of very God, we must remember that He also was very Man of very Man. When we come home weary from a day’s work, we know that our Savior can identify with us. There were times when He grew weary. There were times He sought to sleep. He knew what it meant to be hungry and thirsty. He suffered. He died. Of His own free will He emptied Himself of His glory and now, in His exalted state, He still is able to identify with us. Whatever our needs may be, known or unknown to us, Christ prays to the Father that we may be supplied. He ever liveth to make intercession for us! He that keepeth Israel will neither slumber nor sleep.

Paul wrote concerning the Christ, “who delivered us from so great a peril of death, and will deliver us, He on whom we set our hope. And He will yet deliver us” (2 Corinthians 1:10). Jesus delivered us from the great peril of death—that’s past tense. That work is done, accomplished for us once on the cross. It is the finished, full, complete sacrifice and satisfaction for our sins. “He delivered us . . . and will deliver us” is an on-going present tense. It points to the work of Christ as our High Priest in the Holy Place, praying for us and ever living to make intercession for us. And finally, Paul wrote, “On whom we have hope. And He will yet deliver us.” That refers to the glorious future that awaits all the children of God when we shall have redeemed bodies.

In the courtyard at the bronze altar we looked to the crucified Savior, the Lamb of God that takes away our sin through His sacrifice. In the Holy Place we meet the glorified Savior. He is the same Jesus yesterday, today, and forever. 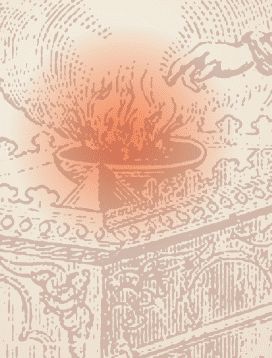 Just as the priests first had to make a sacrifice at the bronze altar before they could come to the altar of incense, so also you can never benefit from Christ’s work, symbolized in the golden altar, until you receive what Christ has done for you at the bronze altar. You can never have the confidence that Christ intercedes on your behalf until you have the confidence that His atoning sacrifice was made on your behalf. To get to the golden altar, you must first pass by the bronze altar where the sacrifice of the Lamb was slain and offered up for you. Before you can ever come to the Holy God in prayer, you must be cleansed by the shed blood of His Son.

The Prayers of the Saints

As a royal priesthood, believers have been set apart unto holiness. They are called to come before God at the altar of incense. The fact that Christ lives to make intercession for us constantly does not mean that we do not have to pray. Aaron was to offer incense on the golden altar at regular times each day. When the priests offered the morning and evening sacrifices on the bronze  altar, they also had to enter into the holy place to burn incense on the altar there.

God has provided a way for the incense of our prayers to ascend constantly to the throne of grace.

“In the same way the Spirit also helps in our weaknesses; for we do not know how to pray as we should, but the Spirit Himself intercedes for us with groanings too deep for words” (Romans 8:26). The Holy Spirit is constantly interceding for us. He leads us to that secret place of prayer, and there, just like the priests in the morning and in the evening, the Spirit opens up our hearts to pray to the Father in the name of Christ.

All true prayer must be initiated and inspired by the Holy Spirit. If not, we are praying like the Pharisee in the temple who basically prayed to himself. If you are not glorying in the cross of Jesus Christ, then your prayer is in vain. Then there is no fire, coming from the bronze altar, placed on the golden altar, rising up to the Lord. It is only when we seek the glory of God and the presence of God Himself that our prayers ascend to heaven.

As a royal priesthood we are standing at the altar of incense. Our faithful High Priest is standing beside us. He continues to pray for us as He did for His disciples. It is through His intercession that our prayers are made acceptable to the Father. His incense—His blood—has been mingled with the prayers of the saints.

How much time do you spend at the altar of incense; how much time do you spend in prayer? Our visit there—our prayer life—is the thermometer of our innermost life. James writes: “You have not because you ask not.” Ask Him. Seek His face. He who did not spare His own Son but freely gave Him up for us all, how will He not also graciously give us all things?  Go to Him. Confess you sins. Cleanse yourself through the Holy Spirit and lift your heart up to God.

Rev. Wybren H. Oord is the Pastor of the Covenant United Reformed Church in Kalamazoo, Michigan. He is also the editor of The Outlook.