“O God of Jacob” (Psalm 84:8b) These few words which constitute our text are part of a verse which reads as follows: “O Jehovah God of hosts, hear my prayer; give ear, O God of Jacob.”

There are several reasons why we should give attention to this statement. Why does not the poet say in verse 8, after the words: “O Lord of hosts”, “give ear, O God of Abraham”? Would this not have been more striking? For in the first part of the verse God is invoked as the Lord of the covenant With that fact an invocation of the God of Abraham would have harmonized fully. Did not the Lord establish a covenant with Abraham? Had not this patriarch been called from Ur of the Chaldees and had it not been said to him in particular: “And I will establish my covenant between me and thee and thy seed after thee in their generations for an everlasting covenant, to be a God unto thee, and to thy seed after thee”?

The use of Abraham’s name at the end of this verse would have formed a beautiful parallel with the first part. Yet not Abraham’s name but Jacob’s is used.

However, there is another reason why we should consider this problem. For this is not the only instance of its kind in this book. God is called far more often the God of Jacob than the God of Abraham. I believe that for every text from this volume of Psalms which could be quoted as referring to the covenant with Abraham there are five, perhaps even ten, in which the fact is stressed that the Lord had chosen Jacob.

Our first conclusion may well be that the composers of the Psalms, whether David, or Asaph, or some one else, were partial to singing the praise of the God of Jacob and the seed of Jacob. 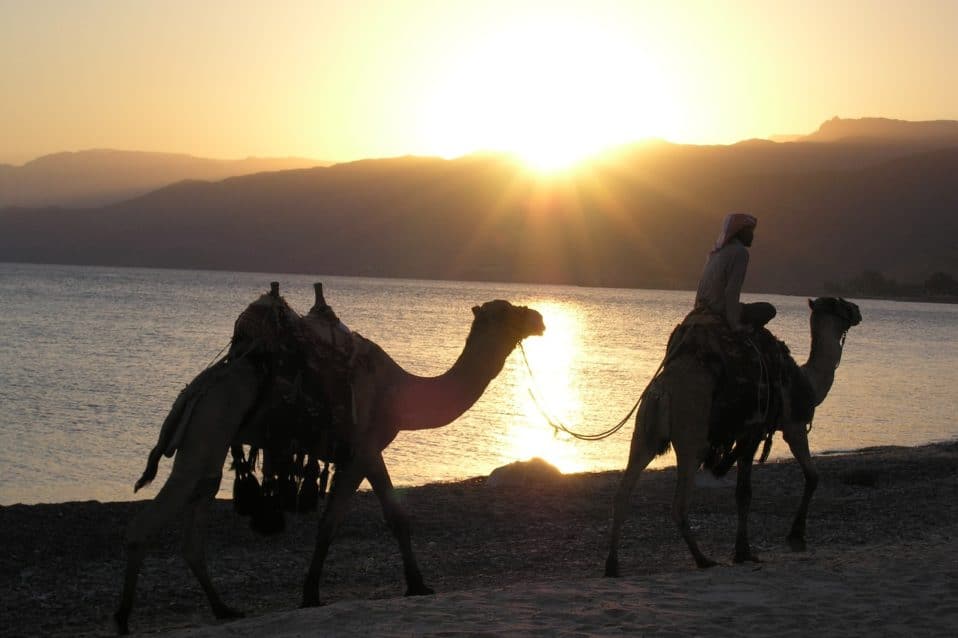 Why? Because in the combination of these two, of God and man, the Creator and the creature, the sovereign grace of the Lord is most wonderfully revealed.

First, we must think of the time from which the name Jacob dates.

In our day a name is only a means of distinguishing one person from another. We bear names that were home or still are borne by our grandparents, uncles, or aunts, or that for some reason our parents deemed attractive or piquant. But in ancient times a name was chosen to typify a man’s life. In those days a name was significant. Thus it was with the patriarchs. Therefore a person’s name was sometimes changed. The first patriarch was at first called Abram, which means sublime father. But God changed this to Abraham, meaning: father of many people.

And so Jacob’s name, too, was a significant name. Genesis 32 tells us about Jacob’s wrestling with God at the Jabbok. After long years of separation Jacob would come face to face with his brother Esau. The nearer the moment of this meeting came the more Jacob feared. What would the outcome be? Would Esau take revenge? Or will he have forgotten that his brother filched the birthright from him? After he has brought all his property, his cattle, his wives and children, to the other side of the river, across the ford Jabbok, he remains alone on this side. Alone in the dark night. Alone to engage in the fiercest struggle of his life. For suddenly he finds that “a man” attacks him and wrestles with him.

Did Jacob realize immediately who that man was? Nobody can say. Here the Word of God drops a veil. But this much is clear; this was not merely a physical struggle. It was also a spiritual struggle.

All night the wrestling continued but at the rising of the sun Jacob’s thigh was dislocated. And then the question is asked by his opponent; “What is thy name?”

Naturally, that does not simply mean; “Give me your name, please.” Under these dramatic circumstances the question has a much deeper meaning; “Who are you? What do you think of yourself?” This is a test of Jacob’s self-knowledge.

Then the weary and disabled wrestler answers, “Jacob.” In this answer, this honest utterance of his name, I see two things. And these two things must always be included when God confronts us with a demand for self-appraisal.

In that simple name “Jacob” you see darkness and light. an abyss but also a heaven.

First, there is Jacob’s frank confession of his own sinful life. As we said before, this name serves as a disclosure of Jacob’s life. He says, “I am Jacob, a deceiver, a cheat.” In this description he gives us a full-length portrait of himself. He was a man conceived and born in sin and was prophetically named in accordance with his sinful character. When we read the headlines of his life in the book of Genesis we always see the same picture. Jacob is a clever and smart person, tough and persevering, weak and sinful. His flesh ever wars against his soul.

But there is more. In pronouncing his name, Jacob also wants to say: “I am the man with whom God is wrestling. I have an encounter with Him who says: ‘I am the God of Abraham, Isaac, and Jacob.’” This Jacob is the child of election. Notwithstanding his shortcomings, his sinful schemes and maneuvers, his encroachment on God’s plans, he is held fast and blessed by God. For Jacob is the son of promise. Paul has written beautifully about this in his epistle to the Romans: “for the children being not yet born, neither having done anything good or bad, that the purpose of God according to election might stand, not of works, but of him that calleth, it was said unto her, The elder shall serve the younger. Even as it is written: Jacob have I loved, but Esau I hated” (Romans 9:11·13) .

Nevertheless, his name was Jacob, which means: deceiver.

So in this name we read Jacob’s confession of his own unrighteousness but at the same time his reliance upon the grace of God.

Now we fully understand why those who wrote the Psalms preferred to speak of. Jacob’s God. These meo sang about what they found in their own hearts. In this expression: “God of Jacob” they confess their sins and their faith. Each of them said: “I am a sinner. I cannot in my own strength live up to the law of God.” But they also confessed: “The God of Jacob is our refuge. For he remembers his covenant.” And so I read in Psalm 135:4: “For Jehovah hath chosen Jacob unto himself, and Israel (an· other name for this patriarch ) for his own possession.” And in another Psalm I read: “For he chose David...to be the shepherd of Jacob his people, and Israel his inheritance” (Psalm 78:71).

Look, this joy in God’s sovereign grace has been the real riches of the faithful Israelite. This is also his eternal salvation.

Now it becomes clear to us why the Jews of Jesus’ day departed from this line of thought in the Psalms. They hardly mention Jacob. They always speak of Abraham. They proudly smite their breasts and say; “Abraham is our father. We are the chosen people.” This sentiment is uppermost in all their discussions with Jesus. They do not speak of Jacob for they fail to acknowledge the sinfulness of their lives.

John the Baptist, you remember, castigated their self-righteousness in his stern call to repentance. He said to the people: “Begin not to say within yourselves, We have Abraham to our father: for I say unto you that God is able of these stones to raise up children unto Abraham” (Luke 3:8).

Nevertheless, the Jews persisted in their attitude. John tells us that in their disputes with Jesus they always asserted, in the pride of their hearts, that Abraham was their father.

In the days of Christ the humble reliance on God‘s grace had almost entirely disappeared. Instead, the Jews spoke with enthusiasm about the greatness of their father Abraham. In the literature of the rabbis that patriarch had grown to a supernatural being. He had become the national hero. The story of his life was wreathed in many miracles and legends and his tomb in Hebron had become a place of pilgrimage. The Jewish rabbis preached the election of their own people, but they separated that election from the thoughts expressed by the inspired authors of the Psalms.

Of course, in itself this mentioning of the name Abraham was not wrong; but that name must never be separated from the consciousness of short. comings and sins. And that was tho fault of the Jews in Jesus’ day. They imagined that they as Abraham’s descendants would automatically share his privileges which he had received from the Lord. The authors of the Psalms confessed something quite different They were moved to tears by their sins and miseries and pleaded for God’s sovereign grace.

That is easily understood. For it was the Spirit of Jesus Christ who spoke in Israel’s poets and prophets. No wonder that back of their confession of Jacob’s God and Jacob’s seed lies the redemptive work of Jesus Christ. For among all the children of Jacob there is only One who understands fully what it means that God in grace receives sinful men. That One is Jesus Christ. God’s Son. He was found in the form of a man and was placed as a child in the cradle of Bethlehem, after the angel had said at the announcement of his birth (and you surely understand the particular choice of his words): “He shall be great and shall be called the Son of the Most High: and the Lord God shall give unto him the throne of his father David, and he shall reign. over the house of Jacob for ever” (Luke 1:32, 33). Yes, over the house of Jacob! Over those who as sinners live only from the salvation which is in Jesus Christ.

For Jacob’s deliverance was brought about only through Jesus Christ. Jacob could not save himself. He was a deceiver. He could not stand before God. For I read in Psalm 24: “Who shall ascend into the hill of Jehovah? And who shall stand in his holy place? He that hath clean hands and a pure heart; who hath not lifted up his soul unto falsehood, and hath not sworn deceitfully.” These words could have been written with special reference to Jacob. He did not have clean hands and a pure heart; many times he had lifted up his soul to falsehood and had sworn deceitfully.

But there is God’s sovereign grace in Christ.

And again I read in the same Psalm from which I just quoted: “This is the generation of them that seek after him, that seek thy face, even Jacob.”

I repeat: Jacob’s deliverance had been effected through Jesus Christ. He was “made to be sin on our behalf, that we might become the righteousness of God in him.” He suffered and died that there might be atonement for all our sins. Therefore we bow in deep reverence before the mystery of salvation which is in Christ. That is our deliverance. And the Spirit of Christ, who among israel’s poets and prophets searched for words to express this grace, is still working in the hearts of God’s children to testify of this grace.

There is a congregation of men and women in whose hearts the Holy Spirit dwells, a congregation gathered by the Lord himself, who confess: “So then, it is not of him that willeth, nor of him that runneth, but of God that hath mercy” (Romans 9:16).

And that congregation sings from the book of Psalms:

O Jehovah of hosts, hear my prayer; Give ear, O God of Jacob.