Pope John Paul II, who courageously stood against the tyranny of Soviet communism, has succumbed in his declining years to the tyranny of evolutionary scientists who claim we are related to monkeys. However the Catholic Church spins this one, many will be led to believe that science is God and the ultimate determiner of our origins. Was there a scientist present at the beginning?

In a statement, the Pope said “fresh knowledge leads to the recognition of the theory of evolution as more than just a hypothesis.” He did not say what that fresh knowledge is or why the “old” knowledge, contained in the book of Genesis, is not valid. The gist of the Pope’s statement is that the human body can no longer be viewed as the unique creation of God but rather the product of a gradual evolutionary process.

Why should this remarkable shift be of any more significance than a debate among theologians about how many angels can dance on the head of a pin? For the reason that if man is not a unique creation of God, he is of no greater value and has no greater moral standing than an animal or any other living thing.

Evolutionary scientists have been anything but humble in their attempt to replace the Jewish and Christian high view of man. Their lower view claims we are material and energy shaped by pure chance in a random universe, with no Creator, no purpose, no destiny and no hope. God asks the ultimate question of Job that ought to be asked of evolutionary science: “Where were you when laid the earth’s foundation? Tell me, if you understand. Who marked off its dimensions? Surely you know! Who stretched out a measuring line across it? On what were its footings set, or who laid its cornerstone—while the morning stars sang together and all the angels shouted for joy?”

Arrogant science sees “In the beginning” to mean the beginning of everything, as if there was nothing before the earth was formed. But those who hold to the creation model see “In the beginning” as a demarcation point between that which has always been, and that which God created in a wholly new and unique time frame that never before existed in eternity. It is the difference between chance backed by some theoretical unmoved mover, and a personal God who exists objectively (and who for our benefit has caused it to be recorded in the Bible).

Modem theology is slowly accepting an unholy alliance with evolutionists who believe in the uniformity of natural causes in a closed system. As the late philosopher Francis A. Schaeffer, noted in his book Genesis in Space and Time: “If we begin with an impersonal universe, there is no explanation of personality. In a very real sense the question of questions for all generations—but overwhelmingly so for modem man—is, ‘Who am I?’”

An impersonal beginning (evolution and random selection), wrote Schaeffer, “explains neither the form of the universe nor the personality of man. Hence it gives no basis for understanding human relationships, building just societies or engaging in any kind of cultural effort.” If God is impersonal, or does not exist, and if man is not made in His image, on what basis do we appeal to a racist who wants to deny blacks equal opportunity? If man is an evolutionary accident, why pressure the Chinese over human-rights abuses?

Having surrendered to evolutionary theorists, the Pope cannot credibly defend other doctrinal issues—such as the virgin birth, the deity of Jesus, His bodily resurrection and our salvation—because the same book that says God created the world and everything in it out of nothing also testifies to these other things. 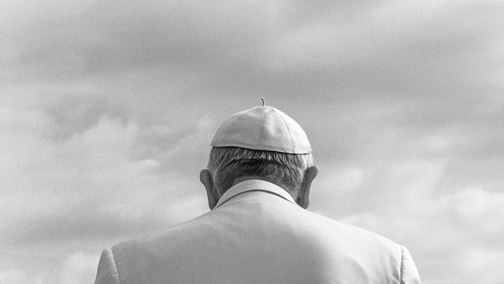 Again, Schaeffer saw the problem: “This either not knowing or denying the createdness of things that is at the root of the blackness of modern man’s difficulties. Give up creation as space-time, historic reality, and all that is left is uncreatedness. It is not that something does not exist, but that it just stands there, autonomous to itself, without solutions and without answers. Once one removes the createdness of all things, meaning and categories can only be some sort of leap, with or without drugs, into an irrational world. Modern man’s blackness, therefore, rests primarily upon his losing the reality of the createdness of all things (all things except the personal God who always has been).”

Columnist Joseph Sobran, a Catholic, once observed that he would rather belong to a church that is 5,000 years behind the times and sublimely indifferent to change, than to a church that is five minutes behind the times, “huffing and puffing to catch up.” With his statement about evolution, the Pope has caught up to the times. In doing so, he has accepted a philosophy that stands at the core of communism. Why would he want to accept the heart of a world-view that he spent his life opposing?