The title of this article is taken from the fable in which several people have gathered together in a small room to talk. In the room is an elephant that constantly gets in the way. While craning their necks, shouting to be heard, and awkwardly moving around the obstacle in the middle of the room, no one dares discuss the problem that is facing them all: the giant elephant in the room. 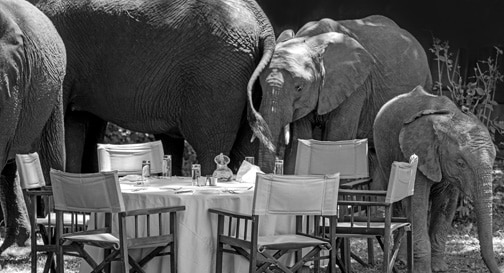 I mention this fable because, as deliberations took place at the 2007 Synod of the United Reformed Churches in North America, I became burdened by the giant elephant in the room. The elephant was introduced when Synod adopted proposed “Regulations for Synodical Procedure.” An Advisory Committee appointed by the Synodical Interim Committee to review the regulations recommended over a dozen changes be made. It was argued from the floor of Synod, however, that these changes were beyond the scope of the advisory committee and that any changes to be made to such rules should come from the local consistories.

Agreeing that Synod can only address matters that come to its attention via the proper channels (consistory to classis, etc.), the advisory committee’s recommendations were defeated and the original “Regulations for Synodical Procedure” were approved.

For many, the giant elephant in the room is the Canadian Reformed Churches in North America (CanRC). Indeed, a fisherman’s estimation of the agenda would claim that well over half the agenda and ninety per cent of our deliberations on the floor of Synod focused in one way or another on matters related to the CanRC. Items such as theological education, a new song book, justification, ecumenical relations, how to enter Phase 3, and a host of other items all touched on how we deal with our brothers and sisters in the CanRC. A fraternal delegate of the CanRC even sat in the Advisory Committee that dealt with our Website.

In all of the deliberations it was very clear, even stated, that we must make our decisions carefully, lest we offend our brothers and sisters in the CanRC. The question that we dare not ask, however, is whether or not we want to proceed in our alleged courtship with the CanRC. At coffee time and over lunch, many delegates quietly whisper to one another that they are delighted that the URCNA is in Phase 2 with the CanRC, but they have no intention of allowing us to move ahead to Phase 3.

Unfortunately, as soon as we breathe a word of hesitation concerning complete federative unity, we are told that we do not understand the high priestly prayer of Jesus. One delegate who expressed his concerns was told he was “immature and didn’t know what was going on.” As a delegate from Michigan, I have been told that I really do not know the CanRC and should stay out of the debate.

Such a mindset is insulting to churches in the United States that have made an effort to get to know the CanRC. The church that I serve in Michigan has had a minister from the CanRC lead a worship service where he spoke to us an edifying word. We have had a CanRC pastor lead a Bible Study and discuss our differences and our similarities.

Personally, I have conducted funeral services and have also worshipped in CanRC churches with my family on both coasts, and in Michigan (Abbotsford, Blue Bell, and Dutton) long before the URCNA ever began. When I mention this to those who are pushing hard for complete fedrative unity, I am told, “Well, you can’t judge the CanRC by those churches!”

Oh, and I should add, it was a delegate from Michigan who tried to get on the floor of Synod 2007 the motion to move to Phase 3-A with the CanRC only to have it defeated on a technicality. It remains my conviction that before we have federative unity with the CanRC, we need to have more federation unity within the URCNA.

The federation’s treasurer in the United States, Mr. Peter Moen, Jr., argued that there was no interest in the new song book. As evidence he reported that last year eighty-seven per cent of the churches in the US chose not to give to this fund. He also noted a similar lack of support north of the border. Members of the Hymnal Committee agreed that support was low but argued that it was not because of lack of support, but rather due to a lack of any product. They assured us that in three years they will have a hundred hymns for us to look at and approve.

I contended on the floor of synod that the reason finances were lacking was not because we do not have a product but because we do not have a need. I then made a motion that we take a straw poll to determine how many churches were in favor of a new song book, and how many would replace the song books in their pew with the new song book when it came out. My, my, my. The reaction was overwhelming! One Hymnal Committee member practically pushed me out of the way so that he could get to the microphone to call my motion out of order. Others also scrambled to the various microphones throughout the auditorium to ask the chairman to declare my motion out of order. “After all,” many of them argued, “we do not know what our elders think in this matter.” I would counter that after discussing the Agenda for Synod, which contained the committee’s report and several overtures concerning the new song book, any astute pastor should know where his consistory stands on this matter.

Although my motion did receive support from the floor, it was completely ignored as the chairman moved on to the next item on the agenda. Interestingly enough, I can not tell you how many delegates came up to me during the next coffee break to tell me how much they dislike the idea of a new song book, and “you’ll never see it in our church!”

The Overture on Justification

Sold on the floor of Classis Michigan as a way to see just how close we really are to the Reformed Church of the United States (RCUS) and “if we can walk together,” the overture on justification hardly raised an eyebrow on the floor of Synod. Delegates quickly voted not to accede to the overture. However, Synod then went on to affirm “as pastoral advice” nine statements concerning the doctrine of justification by grace alone, through faith alone. As far as I could tell, I was the sole dissenting voice.

The reason for the dissenting vote was not because I had anything against the statements; after all, how much studying can a person seriously do in just a few hours. I have to admit, I did not take Berkhof’s Systematic Theology with me nor any of the other books that I would have liked to have been able to consult concerning doctrinal statements. Sadly, I could not even find a copy of the Heidelberg Catechism or the Belgic Confession to see if they had been quoted correctly.

Instead, the negative vote came because the statements were totally unrelated to the overture. The overture from Michigan did not ask synod to make any statements concerning justification; it asked Synod to adopt a specific report. That is a significant difference! For example: let us suppose that a classis would overture synod to declare that the sky is blue. The role of synod is to say one of two things: “Yes, we agree that the sky is blue,” or “No, we do not agree that the sky is blue.” Synod does not have the authority to say, “The sky is green.” By synod’s own definition in the adopted Rules of Procedure, an overture is “a written proposal to a synod, originating from a consistory and processed through a classis, requesting a definite action…” That definite action was the request by Classis Michigan to adopt the RCUS Report. Once Synod said “no” to the report, the work of that committee concerning that overture should have been finished.

Some argued that Synod Escondido 2001 adopted statements concerning creation in response to an overture presented there. Careful review of what took place in Escondido will reveal that Synod was specifically asked to make statements on creation. No such request came to Synod 2007.

I found the debate on the floor of synod rather ironic. When synod was asked to take a straw poll on what the churches thought about a new song book, protests were raised that “we don’t know what our Elders think on this matter.” Yet, when major statements are proposed that can change the course of the URCNA’s future, and it was mentioned that perhaps these statements should go back to the consistories for review, the sentiment seemed to be, “We don’t care what our Elders think in this matter.”

And that, dear readers, is the real elephant in the room. It is not our relationship with the CanRC, the new song book, nor statements on justification; it is the role of synod. After synod adopted the nine statements on justification, I was called aside and asked why I voted against adopting them. I explained that I remembered a time when I was a member of another denomination and the seminary professor of church polity of that denomination was quoted as saying, “Synod can do whatever synod wants to do.” That explanation was not received well.

Imagine my utmost surprise, when on a completely other matter, the Vice-Chairman of Synod brought up the exact same reference only to be ignored by the delegates. More and more, as synod progressed, I saw her taking on power and authority that had not been delegated to her. This is what we left! Top down government led to many of us becoming frustrated with our former denomination in order to start a new federation. I recall how early in our history we insisted that elders be the officers of our assemblies. Now we seem to be working to silence them.

It is not that I do not trust the delegates of Synod 2007. I believe they are doctrinally sound and seek only the good of the church. In fact, it was a joy to meet so many young ministers who were first time delegates and talk with them about their ministries. Still, I could not help but think that many of these young ministers who spoke so freely on the floor of Synod were too young to remember the Alliance meetings where we had drilled into us the necessity for Elders (not synods) to be the ruling body within the Church of Jesus Christ. If future synods continue to take upon themselves authority that belongs in the consistory, the URCNA will soon be like the churches we have left.