In the last article, we began a series detailing the duties and responsibilities of elders (especially) in preserving the marks of a true church. Those identifying characteristics are three, though they really arise out of one principal commitment. The commitment is simple: a true church would regulate all its life and doctrine according to the Word of God. That includes: preaching the Word faithfully, administering the sacraments according to the Bible and pursuing the holiness of the family of God through Christian discipline administered according to the Bible.

In this article we turn our attention to the sacraments. What does it mean to administer the sacraments according to God’s Word? Some will argue that at issue in this matter is doctrine. For example, does communion bestow grace in and of itself (“ex opera opera to”), or must faith be present for blessing to be granted?

Others argue that at issue in a proper administration of the sacraments is the manner in which the administration is done. Lengthy tomes have been penned over the mode of baptism, for example: immersion vs. sprinkling vs. pouring.

I’m not going to spend a lot of time and space on the doctrinal issues related to the sacraments. That is not to say that I don’t believe that a Biblical understanding of the sacraments is important. It most certainly is. But the Reformed faith has articulated most clearly what Biblical teaching on this subject is. In fact, I believe there is no practice in the churches that has received more creedal attention than that of the sacraments.

At the same time, a couple of points need comment in our times. Think of how many are wrong-headed on baptism. I continue to be amazed at how frequently people in Reformed churches seem to think baptism is either a tacit guarantee of salvation for covenant children, or a parental dedicatory service. Seldom do I find Reformed people articulate enough to express the relationship between baptism and the doctrine of conversion, especially the baptism of children. Likewise , I find many who are muddled about the relationship between adult baptism and the doctrine of the covenant. Sad.

Again, although the Reformers wrote book after book about the sacrament of the Lord’s Supper (contra-mass, contra-transubstantiation, tensions between Zwingli, Luther and Calvin), I find many Reformed believers to be confused about the vital relationship between the table and the Word preached. Conversely, I find many who wouldn’t blink at the thought of missing a preaching service, but would reschedule a vacation so as to stay a weekend longer at home “because it’s communion Sunday.” 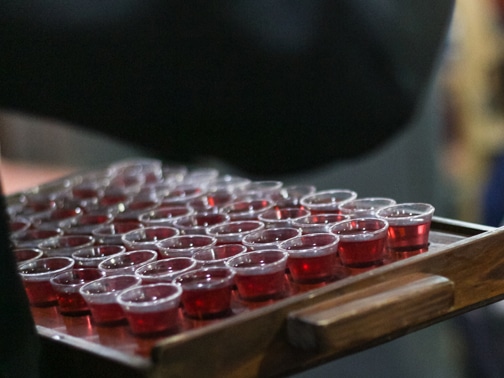 My point on the doctrinal issues is simple: Elders especially must stay grounded in their understanding of the Biblical issues surrounding the sacraments. Study Scripture and your creeds carefully on these matters. The fact that Christ’s church erred on this matter hundreds of years ago is not an inoculation against future heresy!

ON MANNER AND MODE…

Again, I’m not about to spend too much time on this subject. Often the church has generated more heat than light arguing whether a good dunking in the river (or in a fiberglass baptistry, complete with heater and 2 steps) can be replaced by pouring or sprinkling from a silver bowl in a formal church. Baptists, often, are most insistent on the former; many Reformed don’t get too upset over mode (although a few, including one of my former teachers, well-known author Jay E. Adams, consider it a major issue).

In many Reformed churches, the manner of celebration often gives way to discussion about the liturgical forms used in communion and baptism. Some argue that the older, more traditional forms have broader ecumenical acceptance and have stood the test of time doctrinally. Others look for liturgical effectiveness, and have sought to shorten up the wordy ancients.

Frankly, as a pastor I’m more worried about boredom than loyalty to forms. They are, after all, only tools for worship. I am profoundly concerned that God’s people really understand God’s marvelous grace signified and sealed in the sacraments. I am also convinced that reading the same form, time after time, without pastoral comment and challenge, will numb that very understanding. (Now, before you all run off to begin proceedings against me, suspicious that I use “unapproved forms,” allow me to defend myself. I do use them. But never as stand alone documents. I always “apply” them, making clear and personal to all how the sacrament is intended by God to function in their lives. I find the forms sufficient for doctrinal accuracy, but woefully inadequate for liturgical effectiveness. Let’s not flood my mailbox with letters on this one, OK?)

Not long ago, I witnessed a debate over “evidences of liberalism” in various Reformed churches. The more liberal participant, of course, denied that there were any. The more traditional (I’d rather not call him conservative; you’ll see why in a minute) was reciting a litany of reasons he believed there was a sure drift to the left. On many of his reasons, I found myself in complete agreement: the issue of Biblical infallibility inerrancy, the historicity of early Genesis and others. But on one, I did not. He argued urgently that it was a sure sign of liberal drift that the churches of Reformed denominations did not insist upon separate preparatory sermons prior to communion, and separate applicatory sermons following communion. Again, he argued that liberalism had surely crept in because not all churches insisted upon visitors to the table “signing up” on a card in the elders’ presence in order to be granted permission to come to the table. I have a problem with such arguments.

Now, please understand, I know the history. I know the reason for these practices. I also know that there is not only one acceptable way in which God’s people can appropriately prepare for the sacraments.

As I indicated above, I believe rote repetition generates numbness of practice, and soon, numbness of faith. The same thing is true in regard to calling God’s people to prepare for worship, and especially, for the sacraments. How do you, as elders, appropriately challenge your people to participate in the sacraments in genuine faith, so that true blessing is enjoyed?

How many of you challenge your people to prepare for baptism, so that that sacrament becomes one of significance for all believers, and not just the family of the baptized one? Try this: either a week early, or at the beginning of the service in which baptism is to be administered, have your pastor challenge all present to serious reflection on whether their walk with Christ and His Word demonstrates that they are really cleansed by His Spirit. What an appropriate liturgical lead-in to the reading of the Law. What a powerful point made to those baptized as children but living as if obedience doesn’t matter! What an evangelistic tool (yes, evangelistic!) to say clearly to visitors that there are not two ways of salvation: faith and conversion on the one hand, and birth and baptism on the other. (Most North Americans believe that.)

Or consider your preparation for the Lord’s Supper. To insist on a preparatory service (including preparatory sermon) and an applicatory service (including applicatory sermon) could well be to bow to tradition and miss the point. Certainly, such services can prepare the hearts of believers. But they certainly don’t guarantee such. Indeed, asking visitors to fill out cards in the narthex might appropriately prepare them for the sacrament. But then again, it might be treated more like filling out a visitor card, and viewed as insignificant. Much better, it seems to me, that the elders should have a serious discussion about how best to challenge the membership to genuine discernment and self-examination (as I Cor. 11 requires). You may decide to employ different methods each time. One time, a carefully worded pulpit announcement inviting genuine believers (explaining why!), and urging unbelievers and those unsure about their faith not to participate (again, explaining why, and challenging them to respond to the call of the gospel in a specific way—“please speak to one of the pastors or elders of this church after the service about this”). Another time, perhaps a handout along with the bulletin, read by an elder at the beginning of the service, giving careful explanation of what I Cor. 11 means when it says: “Let a man prove himself….” Or again, how about planning the sermon so that its entire thrust is one of challenging the hearer to test heart, life and assurance of faith, and to come to the table in faithful response to renewed conviction.

With these words, I’m not suggesting we Reformed people have had it wrong all these years. Indeed, I enjoy many of our traditions involving the sacraments. I find the forms to be carefully crafted, the creeds most instructive. But I look out from my pulpit week after week to see 7–10 first-time visitors each Sunday, and I’m forced to wonder: do they understand what we are doing? (That’s important! See I Cor. 14:23f.) And when I finish wondering about the visitors, I begin to wonder about the membership. Have we always been as clear and as pointed as we could be in making sure they understand the purpose and the reason for everything we do in worship, especially the sacraments? I encourage you to wonder along with me.

Dr. Sittema, editor of this department, is pastor of the Bethel CRC in Dallas, TX.