When reading the book of Exodus it is important to keep in mind that the Exodus event represents a great contest. The ten plagues and the exodus event were confrontations between the God of the Hebrews and the false gods of Egypt. The gods of Egypt include Pharaoh, as the incarnation of Ra, Horus, and the various other gods personified in the elements of nature. Several of Egypt’s false gods were personified through the Nile river, the waters of Egypt, the land, and the sky. Through the means of the ten plagues Jehovah was systematically confronting and destroying each of the false gods of Egypt.

God gave two reasons for this plague. First, this plague was a judgment against Egypt. The verb translated “to deal harshly” in verse 2, bears a sense of mockery. Brown, Driver & Briggs; the standard Hebrew Lexicon, translate this clause: “how I have made a toy of Egypt.” Through the plagues, God has humiliated Egypt, as if Egypt were a toy. But the humiliation of Egypt was not yet complete; there was still more judgment and humiliation to come.

The second reason for the eighth plague had to do with Israel. We are told that God had hardened Pharaoh’s heart and the hearts of his officials so that He might perform miraculous signs, “that you might tell your children and grandchildren how I dealt harshly with the Egyptians., that you may know that I am the Lord” (10:2). God intended that the plagues would be used to educate the Israelites and their children, so they would know that Jehovah is the Lord. The broader purpose of the Exodus was being brought to light. God’s redemptive purposes extended beyond the Exodus generation.

When Moses and Aaron confronted Pharaoh, they asked him this question “How long will you refuse to be humble before Jehovah? Let my people go, so that they may worship me.” Up to this point Pharaoh had refused to humble himself before the Lord of creation. There was a striking contrast between Moses and Pharaoh. In Numbers 12:3 we read, “And the man Moses was more humble than any man who was upon the face of the earth.” Pharaoh was the total opposite of Moses. Pharaoh denied the existence of Jehovah, and when he finally acknowledged His existence, he denied His right to rule. By the seventh plague, Pharaoh pretended to humble himself by claiming that he has sinned, but it was only an act. Pharaoh’s only tool at this point was deception.

There is a sense of poetic justice in this passage. The verb “to humble” was first used by Pharaoh regarding the Hebrews. Pharaoh attempted to humble the Hebrews by placing taskmasters over them. Pharaoh’s actions, however, came back to haunt him. Instead of humbling the Hebrews, Pharaoh was being humbled.

The nature of the eighth plague was clearly spelled out: “God will bring locusts upon the land of Egypt. The locust will cover the face of the ground so that it cannot be seen. They will devour what little you have left after the hail, including every tree that is growing in your fields. They will fill your houses and those of all your officials and all the Egyptians-something neither your fathers nor your forefathers have ever seen from the day they settled in this land till now.” 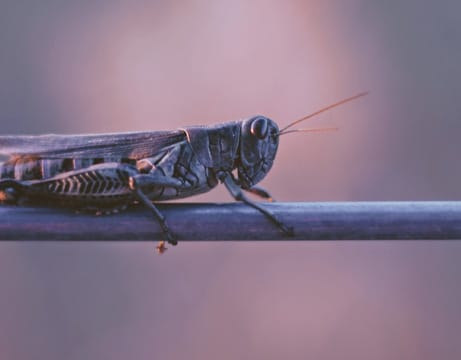 The climate in Egypt was ideal for locusts. As a result the Egyptians looked to the gods for divine protection from locusts and other pests. The eighth plague made a mockery of the Egyptian gods responsible for defending Egypt against insects and other pests. By now, this had become a pattern. Most of the plagues were an assault upon the Egyptian gods. The plagues showed that Jehovah is the Lord. Through the eighth plague we continue to see how God was judging Egypt, and defeating Egypt’s false gods.

Moses gave Pharaoh no time to respond. He knew how Pharaoh would respond. God had said He would harden Pharaoh’s heart. There was no reason for entering into dialogue with a man that God was hardening.

At this point Pharaoh’s counselors stepped in to give advice. They ask a similar question to the one that God raised earlier when God had asked, “How long will you refuse to humble yourself before me?” In like manner, Pharaoh’s officials asked Pharaoh, “How long will this man be a snare to us?” The court officials had no desire to accede to the demands of the Hebrew prophet. They recommended that Pharaoh let “the men” go, referring only to the adult males. Pharaoh’s officials were advising Pharaoh to negotiate a compromise with Moses.

Notice the scorn in the way that the officials referred to Moses.

They did not call him by name, but merely said “this one”. It is clear that Pharaoh’s officials had not humbled themselves before the Lord. There was no fear of God in their hearts. They continued to wallow in their sin. This was consistent with the introductory comments regarding the reason for the plagues. “God has hardened Pharaoh and his officials that he might perform these miraculous signs that you may tell your children and grandchildren, that you may know that I am the Lord.”

Pharaoh was still trying to act as if he was in control. First he had Moses and Aaron brought back to the court. Then, he tried to send them out of the land, but he did so in such a way that he would still be in control. He tried to determine who would go and who would stay, but Moses rejected any conditions or limitations set by Pharaoh. God had commanded that all His people should go. Moses made the point that the Hebrews would celebrate a festival to Jehovah. There is a note of sarcasm, because the celebration would be at Pharaoh’s expense.

Pharaoh’s response is bitter and condescending. He denies Jehovah’s existence and His imminent presence with His people. The king of Egypt commands the Hebrew men to go, but he is unwilling to release the women and children. Pharaoh knew that the men would never leave their families. He held the men in subjection by holding their familys hostage. After giving this command Pharaoh drove Moses and Aaron out from his presence, as if he were in control.

In response to this, Moses stretched out his rod upon the land of Egypt. Jehovah blew an east wind on the land all that day and night, and when it was morning the east wind delivered the locusts to Egypt.

This was the first time Jehovah employed a secondary means–an east wind. This was important because locusts usually approached Egypt from the south; therefore their coming from the east indicated an abnormal condition. An east wind was later used to divide the Red Sea (14:21). The east wind appears throughout the Scriptures as a means of God’s judgment. The Lord shattered the ships of Tarshish with an east wind (Ps. 48:7). In the book of Jonah an east wind was used as a means of judgment.

As the plagues intensified, Pharaoh’s response became more and more desperate; he called Moses and Aaron in haste, he said, “I have sinned against Jehovah your God, and against you.” While there may have been desperation in Pharaoh’s response, there was no true repentance. This was the second time that the king acknowledged his own sin. This time his confession was fuller than it was before. Pharaoh admitted that his sin had been directed against Jehovah and His servants, Moses and Aaron; but he does not acknowledge any wrongdoing against God’s people. The king acknowledged his sin, but there was no true remorse. He did not seek forgiveness, and there was no repentance. Pharaoh acknowledged limited responsibility for the eighth plague, but he never confessed his sin regarding the first six plagues.

The fact that Pharaoh admitted wrongdoing is significant, given the prevailing belief that he was sinless. The ancient Egyptians believed that Pharaoh was divine and sinless. As a result it was impossible for Pharaoh to face judgment even at the time of his death. Upon his death, it was believed that he would be fully deified and transformed into the god Osiris. Osiris was the god who presided over judgment and death. At this point in the exodus narrative it is easy to see how the exodus stands in opposition to Egypt’s religious foundation. In the exodus, Pharaoh is depicted as an enemy of Jehovah. Pharaoh represents the seed of the serpent, and he is deserving of God’s righteous judgment.

In response to Moses’ prayer, God made a change in the wind. The prevailing winds in Egypt came from the direction of the Red Sea.

This verse literally says that “Jehovah turned the very strong wind of the sea.” In other words, the Lord changed the direction of the wind to carry the locusts into the Red Sea.

This event foreshadows what God would do to Egypt’s army. Jehovah would hurl Pharaoh’s most elite fighting men into the Red Sea; not one of them will survive the waters of judgment. The drama of the exodus continues to escalate. Twice in this passage we are told that God had hardened Pharaoh’s heart and the hearts of his officials. By beginning and ending with the same theme, the Scriptures emphasize that although Egypt had been destroyed, the unbelieving leaders failed to comprehend what was happening to them. They had a distorted view of creation and the operation of the universe. This continues to be true of unbelievers today. They do not realize that a sovereign God is in control of history and creation. Their hearts are hardened toward God.

In the book of Revelation, John describes how God will employ locusts once again, at the end of time. “And out of the smoke locusts came down upon the earth and were given power like that of scorpions of the earth. They were told not to harm the grass of the earth or any plant or tree, but only those people who did not have the seal of God on their foreheads. They were not given power to kill them, but only to torture them for five months. And the agony they suffered was like that of the sting of a scorpion when it strikes a man” (Rev. 9:3–5).

In the Old Testament the Israelites were condemned for rebelling against Jehovah and not remembering God’s mighty work of salvation. Likewise, we too should not forget God’s work and how this work is fulfilled through Jesus Christ. It is necessary and good that we reflect upon God’s redemptive work, and that we teach our children about the mighty acts of God. This is vital if we are going to teach our children about God’s redemptive plan, and how Jesus Christ has fulfilled this plan.