Now we know that centuries are artificial, human constructions and that history has no obligation to conform its major events to them. But very near the beginning of the twentieth century an event occurred that at least symbolically marked the end of one era and the beginning of another. On January 22, 1901, Queen Victoria died. She had ruled Great Britain and the British Empire since 1837. Most of her subjects at her death had never known another monarch. She had given her name to a period of western history, the Victorian era. She had ruled over the greatest empire of her time and witnessed the heights of British power and influence.

When she died, Kaiser Wilhelm II was holding her hand in great distress. He was her grandson. In mourning her he was joined not only by his uncle Bertie, now KingEmperor Edward VII, but also by his first cousin — another of Victoria’s grandsons — Czar Nicholas II. The crowned heads of Europe were represented at her funeral. A brave new world would grow up out of the strict social codes and the colonial empires that Victoria represented.

FROM EMPIRES TO REPUBLICS

Many of the royal and imperial houses that seemed so strong in 1901 and that were rooted in centuries old European traditions would soon be swept away in the flood of World War I. Europe, the West and indeed the world would never be the same. Soon the rule of Hapsburgs, Hohenzollerns and Romanovs would come to an end and empires would give way to democracies (or the pseudo-democracies of fascism and communism).

Much of the twentieth century saw real and ideological wars over empire and social-political systems. World War I, World War II, the wars in Korea and Vietnam and countless other smaller wars preoccupied our century. The struggles against National Socialism (the Nazis) and international Communism nearly exhausted the strength of the western democracies. Still those democracies prevailed and at the end of the twentieth century have become the models for many nations of the earth. Indeed at the end of the century many enjoy a greater measure of political freedom and justice than prevailed in the nineteenth century. 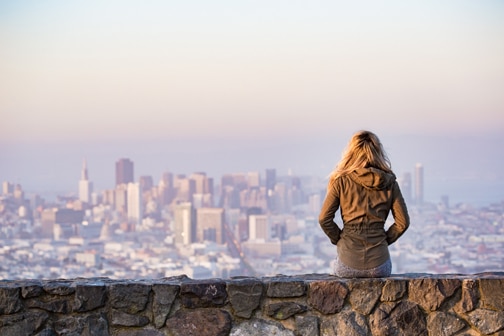 Closely linked to the political struggles of the century were the struggles of different social-economic systems. Powerful voices in the early and middle parts of the century roared against capitalism and its injustices. Communism began the most aggressive and influential form of socialism seeking an end to gross disparities between rich and poor. History may record that communism helped the poor in Russia or China in some ways, but as a system, communism failed in its competition with western capitalism. Communism destroyed human initiative and produced corrupt and inefficient bureaucracies. By contrast western capitalism produced flourishing economies that greatly increased the size of the middle class. While many rightly worry about the ecological cost of capitalism and about the needs of those still poor, capitalism seems triumphant today.

FROM TRAINS TO ROCKETS

One of the most dramatic changes of the twentieth century is in the arena of science and technology. Some born in the day of covered wagons lived to travel in airplanes. For Americans at least, the century of the automobile enabled travel on an unprecedented scale. Regionalism and parochialism faded before tourism and shifting demographics. Marvels of communication saw newspapers and telegraph replaced in speed by radios, telephones, televisions and computers. More information in more forms at faster speeds created a global connection unparalleled in human history.

The technology of medicine is another of the fascinating stories of our century. Progress in drugs and surgical procedures makes the medicine of 1900 seem barbaric. Life expectancy has increased dramatically, and with it, the world’s population. Now 6 billion humans live on the earth, compared with about 10 billion in 1900. Recent advances in the field of genetics make the future seem even brighter for medical treatment. Still our very progress carries with it the signs of the fall as new diseases from AIDS to Alzheimers arise to plague us, and the problems of providing for the handicapped and very elderly continue to grow.

Many of the natural sciences have advanced spectacularly. Physics took a great leap forward with Albert Einstein and continues to delve into the subatomic structure of our universe. As physics examines the ever smaller, astronomy reaches farther and farther into space. Geology and biology pursue the origins and structure of our world in ways that continue to raise questions for the Bible-believing community.

Psychology continues to grow asa pervasive cultural presence. Sigmund Freud published his Interpretation of Dreams in 1900, and we continue to study the “subconscious” and human motivation.Whether history will view psychology as a real advance in human understanding or as the alchemy of the twentieth century remains to be seen. In any case many forms of psychology have posed a more serious threat to a Christian worldview than natural science, undermining for many the sense of a moral universe and personal responsibility, eliminating sin and grace from the discussion.

War has driven many technological and scientific advances in our time. Guns, airplanes, rockets, various biological andchemical agents have resulted from the needs of the battlefield. Most alarming, the development of nuclear weapons has threatened the very existence of the human race. We are reminded that weeds still grow wherever man cultivates the earth.

FROM THE HUMANITIES TO JOB TRAINING

Educational ideals have changed too. In 1900 the educated man was at least bilingual, that is, he possessed a reading knowledge of Latin and a thorough familiarity with the classics of ancient Greece and Rome. Education had the goal of refining and civilizing students. It existed to furnish the mind with learning that made a better man. Our century has seen the extension of education to many more people, but has tended to lower expectations about what the educated person knows. Illiteracy in the schools is a major problem, usually addressed by discussions of teacher training and the size of classrooms. But the deeper problem is, “Why educate?” Many students seem to sense that they study to get a job, but the studies are not connected varito the jobs they want. We need a new vision of the value of education quite distinct from job training. The rise of Christian schools and homeschooling in recent years may prove to be addressing this problem, but may reflect more cultural alienation on the part of parents rather than a new educational ideal.

FROM FLOOR-LENGTH SKIRTS TO MINI-SKIRTS

The developments in popular culture reflect in a particularly powerful way the transitions of our century. The prim propriety of Victorianism has given way to a culture of self-expression and self-fulfillment that is vulgar and morally debased in many ways. We can see that clearly in music and dance. From the sensation of Ernestine Schumann-Heink singing the premier of Richard Strauss’ Elecktra in 1909 to Ricky Martin singing “La Vida Loca,” from the stately waltz to the mosh pit, we have traveled a long way. (Actually Madame Schumann-Heink experienced the craziness of our century in a special way when, during World War I, one of her sons fought for Germany and another fought for America.) Motion pictures as an art form seem to exist, even in their better moments, to explore the ultimate limits of violence, sex and obscenity possible for society to bear. The refined romanticism of Puccini has given way to the gross romanticism of rock and roll. The pursuit of feeling for feelings’ sake has emotionally crippled many and contributed to a deep-seated cynicism and relativism.

Many observers have seen that the late nineteenth century still sought, in education and culture, the cultivation of moral character as an ideal. Today the cultivation of personality is the norm. Those “famous for being famous” are the icons and models of the young and the old. The goal is not goodness, but distinctiveness usually through notoriety. Nothing illustrates this more powerfully than an example from the political realm. In 1901 Abraham Kuyper embodied character as Prime Minister of the Netherlands. In 1999 Bill Clinton embodies personality. We have moved from Abraham the Terrible (as his critics dubbed his righteous zeal) to Slick Willie.

FROM BILLY SUNDAY TO JACK HAYFORD

Billy Sunday represented the emotional, entertaining side of lay revivalism in 1900. He expressed the simple, affecting crusade to convert individuals and the nation. Since his day the simplicity and emotionalism of evangelicalism has intensified and the Pentecostal movement has emerged from that background. Jack Hayford represents today the evolution of the movement of Aimee Semple McPherson to a rather mild and respectable charismatic church of wide influence. He is well-connected to inclusive evangelicals and American conservatism. He also is a composer who exemplifies the contemporary Christian music movement. His song “Majesty,” while perhaps one of the better praise songs, still is stylistically overblown and doctrinally shallow — like so much of contemporary evangelicalism.

THE MAN OF THE CENTURY

This brief and personal reaction to our century still needs a conclusion. I am tempted to suggest that the century is best characterized by the growth of vulgar individualism and that Madonna be the Woman of the Century. But I believe a deeper phenomenon must be noted, and so I would suggest that the twentieth century should be the Century of Violence and that Adolph Hitler, the icon of evil, be the Man of the Century. In the face of much naive optimism that surrounds us, we must recognize that only a Reformed view of sin explains the bestiality of human behavior in our century. Millions and millions have died in wars and camps, of starvation and genocide at the hands of their fellow men. Josef Stalin actually killed more than Hitler, but he did not give us the pictures and images of inhumanity that Hitler did. The Century of Violence must remind us that for all our progress, human nature has not changed. Friedrich Nietzsche who died in 1900 was the apostle of the Dionysian and the Superman, sowing the seeds that Hitler harvested. The evil of mankind’s most progressive century reminds us that humans in every country and every circumstance need Jesus Christ and Him alone as their Savior.

Christians in the face of such evil must not lose heart. Rather we must be encouraged by the promise of Jesus, “I will build my church and the gates of Hell shall not prevail against it.” We have much work to do for Jesus in the twenty-first century.

Dr. Godfrey, editor of this department, is Professor of Church History, and President of Westminster Seminary in Escondido, CA.