A great, green wave of Dutch immigration has hit the province of Ontario, splashed over into the rolling prairies of Alberta. and flattened out into the barbaric back-reaches of British Columbia. This wave came in 1951, and in 1950, and in 1919 and in 1948; each time the splash was bigger than any preceding one. Thousands upon thousands are preparing to put a period behind their lives in The Netherlands and to start out again with a capital C-Canada, the land of their dreams, the wide open future! And so they break the chrysalis of a confining, over-populated civilization in order to strike out, free and full of hope, across the Atlantic Ocean and into the unbounded, far-horizoned virgin lands of Canada: the land of unfathomable promise. 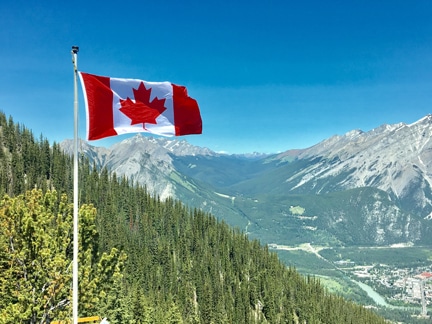 The authorities say we have seen but the vanguard of a historic migration. This siphoning of flesh and blood (rom an overcrowded Holland into a sparsely settled Canada will, if God permits, be a perennial phenomenon; for the population in Holland is increasing quite in defiance of death and immigration and Canada is insatiable.

As one travels through southern Ontario, or southern Manitoba, or up into Alberta from Granum to Neerlandia, or along the tortuous roads between Abbotsford in southern B.C. and Terrace in northern B.C., he inevitably meets Hollanders of every religious stripe and or every occupation under the sun. He meets townspeople who have taken to the woods, shoe-makers who have taken to the agricultural last, truck-drivers who have become electricians, gardeners who now repair railway tracks, barbers who are in charge of lumber yards. And, what is more, success is in their far-visioned eyes.

Denominationally they run the gamut from being Hervormd, Gereformeerd, Gereformeerd (Art. 31, K.O.). Oud Gereformeerd, or Mennonite. The thing to remember is that these people either form groups of their own, as for instance in Lethbridge, WeStlock, Telkwa, or Terrace. or they join existing groups in various stages of development or decline. Variety of purpose, variety of origin, and variety of sentiment—in a situation where few are really settled—produce an exciting and somewhat perplexing effect.

The Response of the Ministry

What concerns me in this article is how the ministers of the Christian Reformed Church are responding to this situation and how, when they awaken more fully to the nature and scope of the present movement, they may improve their response.

The simple truth is that the men in the field now cannot begin to cope with the situation. There is a fearful shortage of men. Most ministers, if they can find the sheep of their flock at all, have to travel far too widely to pasture them. The Rev. J. Hanenburg who resides in Edmonton, to cite an example, has a charge approximately 1000 miles across. The man should be made arch-bishop at least and given a dozen assistants. This example is extreme but even a much smaller charge, say fifty miles across, in a more densely populated province like Ontario, is too big.

A greater handicap to adequate ministerial work is the fact that in so many fields the minister is forced to become an immigration officer, an immigrant sleuth, a social worker whose duties cannot be defined. The men now in the field have faced up to this task with cheerfulness and self-denial but. if the spiritual aspect of immigrant life is not to be grossly neglected, more men will have to enter the field.

The Response to the “Liberated”

I shall designate as “Liberated” those people who since 1944 have openly asserted non-conformity to the decisions pr two Synods (1939-43; 1943-45) of the Gereformeerde Kerken. Owing to a series of depositions and withdrawals from these churches there is now a new denomination, the Gereformeerde Kerken (maintaining Art. 31. C.O.). From a history1 of the period under review. it appears that the Synod of 1942, by continuing itself in office in excess of the tenure allowed and by adding to its agenda, went beyond its jurisdiction, that two professors refused to comply with its decisions. that the following Synod maintained the position held by its predecessor and exacted conformity to its doctrinal and church-political decisions. that several ministers dissented, that such ministers were suspended or deposed, that a sentence or schism was pronounced against many office-bearers in the church and even against an entire congregation (Bergschenhoek). and that, as a consequence. there was an exodus from the existing Gereformeerde Kerken. The grounds given for the exclusions were not so much theological as church-political; the sin committed was not so much heresy as mutiny.

The movement had, of course, a theological background—the focus o( which was the doctrinal formula of 1905—and now has a backlash in theology. The Liberated people success, in their views on the Covenant, that all children of believers are sanctified in Christ and therefore under the Covenant, and that the promises of the Covenant are inseparable from the requirements of the Covenant. In their views on the Church they stress the unit, of the true church and insist that the unity must come to institutional expression. In their views on Culture. they emphasize that the Christian, no matter what his occupation may be, must live by the grace of God in Christ and reconquer all of life for the coming Christ.

Since the entrance of this last group into the Christian Reformed Church presents a many-faceted problem, it seems time, especially with a view to the continued flow of immigration, for an unprejudiced discussion of some of its aspects. We may not evade our difficulties by saying that we do not like the spirit of these people or that, since they were in trouble across the sea, they are to be viewed with suspicion. We may never, it seems to me, regard a serious breach in the church as a purely human disagreement issuing from inevitable one-sidedness on both sides of a debate. If we should so regard the present schism, we would be shunting aside the absolute sovereignty of the Word and embrace a pestilent relativism from whose tentacles few would escape. We would be denying the possibility of actual obedience to God and of actual disobedience to God in precisely that orbit of our life—namely, the church—where obedience or disobedience has such awesome consequences.

In view of these considerations as also the fact of the essential unity of the church, it seems plain that we can admit neither the Liberated nor the Synodical people to our communion without a thorough inquiry into their attitude (1) to the three forms of unity as well as the supplementary doctrinal deliverances—among which are the Conclusions of Utrecht, 1905—which are binding in the Christian Reformed Church; and (2) to each other as formerly opposing groups within the same church. Admittance without satisfaction on these two points will cause, and I believe is causing, a great deal of tension.

In order that consistories may perform their present difficult task with greater effectiveness, there must be more DISCUSSION OF THE RELEVANT ISSUES. Consistory members are in the dark about things they are facing right along but cannot settle. For instance, one reason why many Liberated people today organize churches of their own is that they feel, and have some reason to feel, that the mind of the Christian Reformed Church is against them. Another reason is that many Synodical people continue to view the Liberated as pathological troublemakers. On the other hand, the Liberated themselves frequently display an impatient attitude toward the Christian Reformed Church and fail to enter into its historically conditioned modes of thinking. Therefore, in the interest of finding constructive outlets for the tensions now existing, the church pre”s might profitably concern itself with such differences which now tend to preclude the active communion of the saints and to make consistorial work unusually perplexing.

Some of the differences concern the nature of the church and therefore involve the doctrine of pluralformity; some concern the nature of the Covenant and the related doctrines of baptism and regeneration. Still other questions, though necessarily tied in with the preceding, are practical and concrete: H a man was a schismatic in Ethiopia, say, would he by simple transfer to New Zealand cease to be a schismatic? Just when is a man duty-bound to leave his church communion? H a man finds the atmosphere in one denomination uncongenial, should he be advised to join another denomination?

The Way to Improvement

First, as intimated, the existing church papers and local periodicals should more and more face up to the issues now troubling the minds of our constituency. They should not avoid a subject from fear of creating tensions when in fact the tensions are already there and need to be relieved.

Second, in dealing with the immigrants the minister in the field should know that they have a fairly keen ear for good preaching. Any sermons that leave the impression that the Salvation of man is central and ultimate, and hence that God is man’s lackey, are to the sensitive immigrant just so many Methodistic Sunday-School homilies. In sermonizing the Kingdom of God, to which the salvation of man is subservient, must be sought first. Let ministers exult at the theological sensitiveness of the people in their care and be willing, if necessary, to adjust their own thinking.

Third, relief from the man-shortage problem may come by initiating and implementing plans to support promising immigrant boys through school. The present student aid funds are not adequate to fill the urgent requirements now existing. In catechism classes and from pulpits the call should go forth to young men to prepare themselves for the ministry of the Word. These boys should not have to draw too heavily on the meager financial resources of their parents. If we honestly wish for Canada an indigenous church life, we shall have to help train leaders for that huge and promising field.

To summarize: We need fresh, large-scale thinking on the subject of Canada; we have a right to ask the immigrants to adjust themselves to our ways of thinking and acting only insofar as we are willing to enter into and be influenced by their ways of thinking and acting; this requires free interchange of thought; and finally we should be willing to place ourselves and all that we have at the disposal of Jesus Christ who is gathering his Church also in Canada.

JOHN VRIEND, son of Dutch immigrant parents now living in northwest Canada and thus acutely aware of the life of the churches there, is at present a graduate student in the Classics Department at the University of Michigan.