We read in II Chronicles that “after Rehoboam’s position as king was established and he had become strong, he and all Israel (Judah) with him abandoned the law of the Lord. Because they had been unfaithful to the Lord, Sheshak, King of Egypt, attacked Jerusalem in the fifth year of Rehoboam.” It was in this historical context that Psalm 89 was written by Ethan the Ezrahite (under the inspiration of the Holy Spirit). Who was he? He was a contemporary of Solomon, the father of Rehoboam. When the Lord tells us about the wisdom of Solomon, He says in I Kings 4:31: “He (Solomon) was wiser than any other man including Ethan the Ezrahite.” Ethan must have had a remarkable reputation of brilliance to have Solomon’s wisdom compared to his! 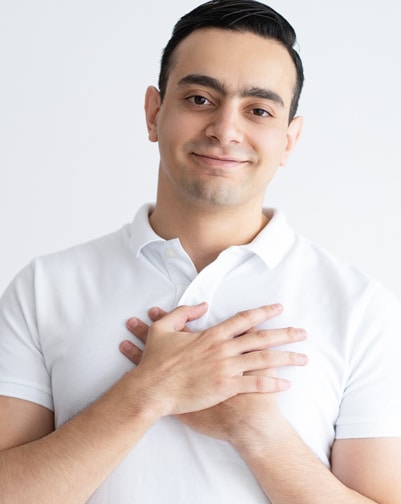 Listen to Habakkuk: “Though the fig tree does not bud and there are no grapes on the vines, though the olive crop fails and the fields produce no food, though there are no sheep in the pen and no cattle in the stalls, yet I will reoice in the Lord, I will be joyful in God my Savior” (Habakkuk 3:17, 18).

Jesus and His disciples sang at the institution of the Lord’s Supper on the night He was betrayed. Listen also to Paul and Silas in the prison-dungeon in Philippi. We read: “About midnight Paul and Silas were praying and singing hymns to God, and the other prisoners were listening to them” (Acts 16:25). Yes, great troubles may come, but we can still sing to the Lord! What is the subject of our song? It is the mercy and love of the Lord. God’s love and faithfulness never fail. God’s character is the basis of our song. In the middle of the book of Lamentations, written by Jeremiah in the depths of trouble in connection with the exile of Judah, we read the words of this song: “Because of the Lord’s great love we are not consumed, for his compassions never fail. They are new every morning; great is your faithfulness” (Lamentations 3:22, 23).

The mercy and covenant love of God comes to His people in spite of their sin. We don’t deserve it. We have broken the commandments of the Lord. But because Jesus Christ has come and taken our place in His perfect life and atoning death, we have a new relationship by faith through the Holy Spirit and we can sing of the mercies of the Lord forever.

One of the most poignant illustrations of “Thanksgiving Anyway” in my ministry was the death of a little three-year-old boy in one of our churches. He drowned when he fell into the sewer of his father’s hog confinement. His father had recently checked the sewer and had neglected to replace the cover. The father was full of guilt as he grieved, and could find no answer or relief. He said, “I cannot sleep or eat. I killed my son.” As he and I looked at Scripture, we read Proverbs 20:24: “A man’s steps are directed by the Lord.” “Do you believe this?” I asked. “Yes,” he replied. “What if the verse said: ‘A three-year-old’s steps are directed by the Lord.’ Would you believe that?” I probed. He paused. With tear-filled eyes he answered, “Yes, I do believe that.” We prayed and he returned home. The next morning he called, asking me to read Psalm 30: 4 and 5 to the congregation Sunday, This is what it says: “Weeping may last for a night, but joy comes in the morning.” He and his family had found comfort in the sovereignty of God’s direction, and in His faithfulness and love. In this Thanksgiving season, let us be reminded that we are to sing of the mercies of the Lord forever—in all situations of life. This is the only way to have “Thanksgiving Anyway.”