The Reformation cannot be isolated from the history that went before it. Even so, certain themes of the Reformation could be difficult to find during long periods of the medieval church. Two such themes were the normative position of the Scriptures and a strongly emphasized soteriology of justification by grace through faith alone. These two themes came together through Luther and pointed him to the book of Romans as a clear explanation of the Gospel. Luther believed justification by grace through faith alone was ‘depicted in masterly fashion’ in Romans. How could such an important doctrine have been left out of medieval exegesis? Taking Romans 3:27–4 as an example passage, two prominent medieval theologians—Peter Abelard (1079–1142) and William of St. Thierry (1085–1148), with different exegetical approaches (even to the point of hostility)—shed some light on this question. These theologians showed an inherent tension in their exegesis of Romans 3:27–24 as they sought to explain justification through infused human love. 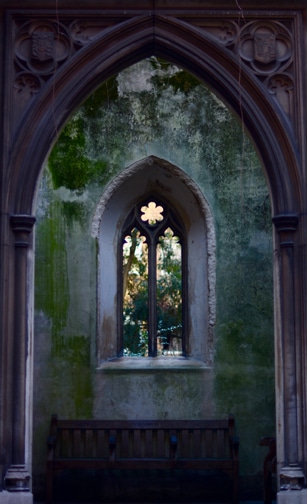 For Peter Abelard, the main question in exegeting Romans 4:3 was by evaluating the relationship between faith and works. Abelard asked:

So where, O Jew, is now your glorying, that extraordinary boasting in which you used to indulge concerning the law and its outward observances? Has it been excluded … excluded by a law of works, that is, of some external deeds? No, but by the law of faith.”

Abelard contrasted “the law and its outward observances” with “a law of works” and with “the law of faith.” Because Abelard consistently combined the terminology of law with that of faith, Abelard failed clearly to separate and distinguish works contrasted against faith.

By “the law and its outward observances” Abelard was referring to “the whole Old Testament… circumcision, sacrifices, keeping the Sabbath, and other symbolic ordinances of the same kind.” By “a law of works” Abelard similarly referred to those who “fulfill the law merely according to the flesh and not according to the spirit… accounted righteous in men’s sight… but not in God’s.” Finally, by “the law of faith” Abelard referred to “the love which comes from faith in our salvation through Christ.” This is the kind of law Abelard believed would make people right before God.

Abelard believed that the ‘law of faith’ meant the internal love flowing out of gratitude at Christ’s death on the cross where penalty for sin was paid. Because of this, Abelard was forced to distinguish ‘love’ from ‘works.’ Contrasted to Paul’s words “the one who does not work but trusts Him who justifies the ungodly” (Romans 4:5) immediate tension is felt as ‘the one who does not work’ must not include ‘the work of love’ for Abelard’s interpretation to be consistent. Abelard tried to resolve this problem by choosing the highest virtue of the law, namely love, as being the most important aspect of the law and somehow distinct from ‘works’— the only possible solution for Abelard.

Abelard’s definitions of “faith” and “law” created enormous tension in bringing together as equivalents categories that are polar opposite concepts. Because Abelard projected his definition of “law of faith” as meaning the good work of ‘sanctified Christian love’ into Romans 4, a self-contradictory position arose. Some of the passages that include the imperative to love the Lord include the Books of the Law, which Abelard categorized as the ‘law,’ and through which Abelard criticized the Jews for trying to obtain justification. Abelard’s definition of the “law of faith” failed to differentiate love and faith sufficiently, resulting in an unnatural tension between justification based on one’s own full works and one’s reliance on the full works of Christ.

Abelard recognized the inherent thrust of Romans 3 to some degree because of his insistence in separating works from faith over the related issue of baptism. Since circumcision “took the place of baptism” before Christ and was clearly Old Testament law, Abelard did not believe that baptism could justify either. While the Roman church taught that baptism initiated the process of justification, acknowledging baptism to be a work that infused a person with justifying grace was directly in contradiction of Romans 4 for Abelard.

Abelard, however, desired to remain at least superficially faithful to the church’s teachings concerning baptism, and this desire resulted in more exegetical tension. To stay true to his skepticism over the justifying power of the work of baptism, Abelard wrote “it would also be possible for a man to die ‘in a state of baptism’ before he was yet baptized, and so be saved.” Abelard tried to reconcile his potential deviation from the teachings of the church by wrestling with the possibility that in certain cases, a man may find himself in a situation where “he would have to be both saved and damned,” for example, if a man were to die before being baptized.

To resolve such a hypothetical situation, Abelard, agreeing that man ultimately must be baptized to be saved, said that the man who is justified “is predestined to life, and will never be overtaken by death until the Lord shows him what is of obligation concerning the sacraments.” God would see to it that an elect man would accomplish every work needed to do in every circumstance in order to be saved. Abelard seemed content with baptism as a necessary component for salvation, but not necessarily for justification of any sort.

One of Abelard’s greatest opponents was William of St. Thierry, who also wrote an exposition on the book of Romans. For William, Romans 3:27 was not trying to distinguish carefully between two different sets of laws as much as two different attitudes underlying one’s approach to the law. The ‘law of faith’ and the ‘law of works’ referred essentially to the same law, “both of them equally say, ‘You shall not covet’ and under this prohibition are contained all the sins committed through concupiscence.”

When William clarified the differences between the two laws, it was not a matter of content but a matter of approach. For example, “What the law of works commands with a threat” is compared to that same substance which “the law of faith obtains by belief.” Again, the ‘law of works’ is facing God’s law in fear rather than through love, “Do what I command”—while the law of faith rather asks in humility and trust, “Grant what you command.” The question is not what the content of either law is, but that one “may know by whose gift he is able to do it.” As long as the disposition of the doer of the law is cognizant of God’s initiation of the obedience within, the doer of the law has nothing to fear.

Faith defined as ‘how one approaches the law’ is how William understood Paul’s problem with the Jews. Instead of recognizing one’s obedience to the law as the gift of God’s grace, the Jew instead “presumes to appropriate to himself justice by reason of the works of the law, or when a proud man does this in regard to the merits of his works.” William explained Paul’s criticism of the Jews as those “who boasted of the works of the law which they performed not out of love but out of fear, and because they wished to seem just and to be preferred to the Gentiles.” If reward from God is mistakenly thought to be deserved, then William explained Romans 4:4 as describing the way in which God will judge such presumption—“without mercy.”

The right approach to the law, argued William, is one out of love and not fear. This love also has the virtue of refusing to take any credit from any of the obedience causing justification in the believer’s life. Not even the act of faith should try to take any credit for the merit one has received from God, since faith is merely the instrument: “Although it is certain that justice comes to no one except from faith, care must be taken lest this be thought a reward deserved by faith.”

William fearlessly described justification as arriving through the works of the law approached by ‘faith’, meaning “to approach God by trust and love… to offer oneself in obedience.” As long as credit to God is given for your righteousness, you have fulfilled the law of faith according to William. Take credit for your own righteousness, and the law of works will condemn.

The inherent, unresolved tension in the way two prominent theologians understood Romans 3:27-4 dominated the medieval church. Their view of a works-infused faith was accepted by the church for many years. Luther once aptly summarized the inherent problem with the exegesis of medieval theologians:

They have one and all overlooked the clearest and plainest teaching of Paul as if they deliberately shunned this morning star, or rather this sun, because of the carnal notion they doubtless entertained that it would be absurd to have no place left for merits.

Luther went on to teach that Paul was not trying to reconcile ‘faith’ with ‘law’ by coining the phrase “the law of faith.” Rather, Luther said that Paul was trying to emphasize the fact that faith is a commandment completely separate from the whole of the ethical law including the degree to which people love. Faith is a ‘law’ unto itself and only itself. The reason why the commandment to have faith is not a regular ‘law’ is because no man can achieve justifying ‘faith’ unless it is given to him by God. Of particular importance with respect to Abelard, Luther taught that faith is no ordinary ‘law’ because faith was designed specifically to destroy any notion of human satisfaction before God on the basis of works or law of any kind, but rather to point to the works of another—Jesus Christ.

It would be difficult for the medieval theologians who lived in a world of a Christian faith that included meritorious works as a vital aspect of justification to commit themselves to stand for such teachings that contradicted the doctrine and practice of the church of their day, especially before the more blatant abuses and immorality present before the Reformation. It was not that Abelard and William were without any notion of what Paul was speaking of, but rather deemed Paul’s words alone as being hard to believe against the great weight of the Catholic tradition before them, and the result was an unresolved tension in their exposition of Romans 3:27–4.

Mr. Bryan Miller is entering his third year as a seminarian at Westminister Seminary in Escondido, California.