Conscious of a “calling” to serve the Lord with our lives, it was understood from day one that we would be a team. We set out for Syria with that in mind; but it was five years before we settled down to our life’s work in Chicago of all places! If wives are to be help-meets, certainly missionary wives play an important support role. For the first twenty years I was involved only in small ways with our radio ministry—opening the mail, keeping statistics, and staying home with our six children.

In 1969 Bassam needed more help. One of the stations was asking for an English script of each Arabic message. He put a rapid translation on the dictaphone and I typed it up. I had my foot in the door! In the 1970’s I started going to the office part-time. It coincided with our peak mail time. For a few years we had an ideal air slot and the mail flooded in-1600 letters in one month. We worked night and day. 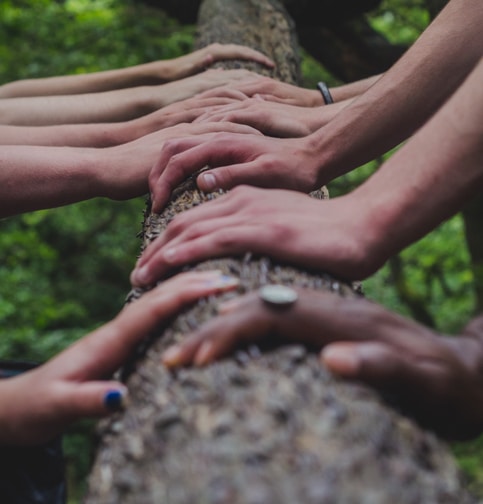 Another 20 years have gone by and the Arabic broadcast is now a full-fledged “department.” When certain countries within the Arab world refused to deliver Christian books, I suggested sending a series of tracts twice yearly, by first class mail, with an encouraging letter of explanation. These tracts were typically carefully planned. They became a series of messages from the Messianic prophecies of Isaiah. Approximately 150,000 copies of what we call the “comfort” tract (based on Isaiah 40) have gone to individual listeners. This is the one we send with the first airmail reply. This sermon touches the heart of the listener and all who share it with him.

We lived and breathed our work. Out walking in the evening we would discuss further strategies. We always concluded that two heads were better than one. Bassam had to read all the mail and prepare the messages. This kept him at his desk in the evenings. He shared the special letters, and I lived for those translations. The packages from our mailing address in Khartoum, Sudan came to our home, and just opening the mail and preparing it in its various geographical categories took considerable time.

For a number of years Bassam taught a spring course on Missions to Muslims at Reformed Bible College in Grand Rapids. He shared those times with me and I knew what he was teaching. I began to think how great it would be to have this in book form. We were getting requests from young people asking for something in English which would help them approach a Muslim. I confess that I used a bit of cunning when I asked him to record one of these sessions—just for me!

It’s not easy to transform class lectures into readable book form. There are all those parenthetical statements to deal with! Dear friends transcribed the first draft. That summer I typed and retyped the manuscript—pre-computer days. Finally in 1981, THE BIBLE AND ISLAM, Sharing God’s Word with a Muslim was printed in book form. Another five thousand copies were printed in 1987 and a third reprinting of five thousand in 1992.

The promotion and handling of this small book became another of my projects. A few well-placed classified advertisements in Christianity Today and Eternity magazines began to bring in an exciting response. We advertised our Arabic publications as well and enjoyed seeing them used on university campuses as part of spontaneous book-table ministries. One of our own sons took an extra year at graduate school to engage in this kind of ministry. Requests for literature and for our book in English carne from all over the world.

In the 80’s the Lord used our book in an unexpected way. The religion of Islam was talcing hold in our state and federal prisons. Requests came from individual prisoners and from chaplains. Again there was a time limit on freedom even in our own country. Just as we had had difficulty with literature distribution in the Arab world, we are now up against organized Islam here in America. Chaplains tell us that they can only use our book with great care. My prison ministry file tells quite a story.

It has been a personal thrill to see THE BIBLE AND ISLAM being chosen for use in other countries. Some years ago it was printed in South Africa. Soon it should be available in Kenya in an East African version. And quite amazingly it has already been translated into Russian, in manuscript form; and hopefully, this summer it will be further translated into the Tatar language. It was considered an ideal resource for Russian pastors in Tatarstan, an autonomous region within the Russian republic which is fifty percent Muslim. A Portuguese translation awaits printing for use in Brazil.

Early on I noticed that we had a standing invitation to contribute to the Missionary Monthly. I volunteered. Twenty years and almost 180 articles later, I thank God for this amazing outlet. Again it would seem that my previous work as secretary to the editor of the Winnipeg Free Press had been good training. There has never been a dearth of subjects about which to write.

Public speaking was another inevitable consequence of being involved in a field that has been of ever-increasing interest. Before we had the delights of preparing live videos about our work, I spent many hours preparing four different slide programs for mission emphasis occasions.

When my husband returned from one particular trip to his field, he declared that from then on I must accompany him. I fell back on our marriage vows—to “obey.” I had always been reluctant to leave the family. But they were growing up and quite responsible young people. Traveling is easy for me. I had crossed the ocean before I got married. Work trips included Morocco, Tunisia, Egypt, Jordan, Kuwait, Lebanon, Syria and other spots. Since Bassam was glad to relinquish his role of photographer, these trips were invaluable for both my writing and slide production.

We praise God for giving us the good health to accomplish far beyond what we ever dreamed possible. We look forward, if it is His will, to serving Him in retirement.