The publication of Dr. Machen’s biographical memoirs is truly a stirring event in the Christian world! The learned author, Dr. Ned B. Stonehouse of Westminster Theological Seminary, here portrays the life of one of God’s noble-men, a man who was at once a brilliant scholar and an ardent believer. But in doing so the author has also described for us an age ill the life of the church in North America. For this book gives us an insight into the great apostasy of the 20th century, the rise of modern liberal ism with its roots in the Bible-destroying higher criticism of Germany.

The author has included many personal documents not available to the public with painstaking discrimination. At the same time the objectivity of the author in his reproducing or the arguments of Dr. Machen’s opponents is laudable. Withal Dr. Stonehouse has achieved an artistic whole which creates in the reader a sense or genuine pleasure. This is sound literary realism! Realism, that is, of the Christian type. The mind and heart of a modern liberal might not be able to appreciate the love for the Truth that animated Dr. Machen. But the characterization borrowed from Pilgrim’s Progress, designating the subject of this study as “Valiant-for-Truth,” is indeed a happy one. For Dr. Machen’s struggle was not with flesh and blood, neither were his weapons carnal—he was not wont to oppose people on the basis of personal likes or dislikes, neither did he stoop to political intrigue to gain his ends. He took his stand unhesitatingly for the Truth as presented in the infallible Bible as interpreted in the historic Reformed Confessions of the church.

Dr. Machen could not go along with the liberalizing wing of the church that aimed at reconstruction and union with other denominations not historically Presbyterian. Already in 1920 he entered the fray as a polemicist. He contended that the action for church union involved “the substitution or vague generalities for our historic standards, as the expression of what we are to regard as fundamental in our faith.” He also complained that tIle language of the proposed merger document was “studiously vague and colorless: there was, for example, no clear statement or the deity of our Lord or of the deity of personality of the Holy Spirit” (p. 306). 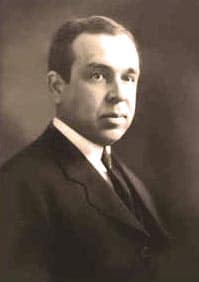 Indifference to the Truth, the faith once delivered unto the saints, was for Dr. Machen the great sin of his church and he inveighed against it sharply and powerfully. To be wrong about a detail of doctrine was not nearly as heinous, in his opinion, as not to be concerned about the rightness or wrongness of a doctrinal position at all! For this bad attitude, Dr. Machen well realized, could only lead the church into skepticism. Such a mood would make a Luther—willing to stake everything upon the truth of the Word and stand by such conviction, come what may—impossible. It was due to this dominant mood or indifference to the truth, which was gaining ground among the moderates in the church, Dr. Machen well knew, that the cause of historic orthodoxy was scorned and lightly esteemed. Dr. Machen believed that not merely every processor and teacher in the church, but that every preacher ought to be a. militant defender of the faith. To him it was a question of being for Christ or against him (cf. p. 308) . For the Word of God is living and powerful, it is the flaming witness of the incarnate Word. The question of the truth of God as revealed in the Bible was ultimately identical to the question Jesus put to his disciples: “What think ye of the Christ?”

Throughout his life as controversialist for the faith Dr. Machen endeavored to keep the matter of his personal relationship and responsibility to the living Lord in proper focus. In his Origin of Paul’s Religion (1921 ) Dr. Machen in masterful fashion gave the Bible-believing, orthodox answer to the question of the origin of Christianity over against modern critics. This book was the result of his participation in the Sprunt Lectureship at Union Theological Seminary, Richmond, Virginia, and serves as “a powerful critique or the view or modern Liberalism” to the effect that Paul had merely a “historical Jesus,” one who did not come nor claim to have come into the flesh as the supernatural Son of God. The book was widely acclaimed and through it Princeton Seminary received much acclaim. Even such an opponent as B.W. Bacon, whose book on Jesus and Paul had been severely criticized in this work, designated Princeton “as the headquarters of apologetic and polemic theology,” and spoke of Dr. Machen as upholding the “best standards of his school” (p. 332). In Christianity and Liberalism Dr. Machen continues his attack on modern Liberalism. He clearly demonstrates that Christian apologetics is not merely a negative, defensive branch of theological science as some seem to think today. He was not chiefly occupied with a defensive action put forth to hold the fort, but he consistently went on the offensive, illustrating that the strongest defense is a good offense. This book also grew out of the existing practical situation in the church of Machen’s time. He had been invited to pre· sent a series of addresses to the Chester Presbytcry Elder’s Association, which he did with such fervor and scholarship that the Association asked him to publish his lectures. Here is Dr. Machen’s own summary of the contents of the book:

“What is the difference between modern ‘liberal’ religion and historic Christianity? An answer to this question is attempted in the present book. The author is convinced that liberalism on the one hand the religion of the historic church on the other are not two varieties of the same religion, but two distinct religions proceeding from altogether separate roots. This conviction is supported by a brief setting forth of the teachings of historic Christianity and of the modern liberalism with regard to God and man, the Bible, Christ, salvation, the Church and Christian service. If Christianity, in its historic acceptation, is really to be abandoned, it is at least advisable that men should know what they are putting in its place,” (p. 342).

In this classic Christian statement Dr. Machen deprecated the modern revolt against doctrine as such, the idea that “creeds are merely the changing expression of a unitary Christian experience” (Cf. Christianity and Liberalism, p. 18). If this is all that Christian doctrine is it will lead us to the sheerest skepticism, for one creed call then have no pre-eminence above another. For the Christian a creed is not a mere expression of Christian experience, but rather the setting forth of those facts upon which experience is based (ibid, p. 19). It is Dr. Machen’s contention that if one gives up doctrine he has given up Christianity. For doctrine in its simplest form is fact plus interpretation. For example, Christ died (that is historical fact) for our sins(that is interpretation). Hence when the liberal preacher rejects the historic doctrines he is really rejecting the whole basis of Christianity! Liberalism, said Machen, is altogether in the imperative mood: it tells a man to do good and be good. But Christianity begins with a triumphant indicative, it makes an announcement of God’s gracious act in sending his Son into the world.

I am sorry that space for bids my further exploration of this fascinating book. Let the believer, who still holds to the idea of the militant church, procure this little volume for himself from the publishers of Dr. Machen’s biography!

One thing is certain, if Dr. Warfield’s affirmation is true that “controversy is the very essence of revolutions” (Cf. Calvin and Calvinism, p. 10), and, if it be granted that the church under the impact of higher criticism and modernism is passing through one of the major revolutions of its history—then as unto Calvin before him, to Dr. Machen belongs a prominent and honorable place in the ecclesiastical Hall of Fame. The fundamental aim of this controversy was, indeed, constructive and not destructive, his critics’ malicious insinuations to the contrary notwithstanding, for Machen worked with the trowel in one hand and the sword in the other. In that respect we believe he stood in the right tradition. That which Dr. Warfield affirms concerning the best of Calvin’s controversial writings, namely, his Letter to Cardinal Sadoleto. may be transferred without diminution to the whole of Dr. Machen’s polemics. Courteous, even gentle and deferential in tone, and yet cogent, conclusive in effect, it perfectly exemplifies the precept of suaviter in modo, fortiter in re (agreeable in manner, strong with respect to the issue, cf. op cit. p. 10).

And yet for all his spirit of Christian forbearance and charity Dr. Machen was cited by the hierarchs or his church as a “troubler of Israel” even as wicked Ahab, to whom the word of the Lord came by the mouth of Jehovah’s faithful servant, sought to cast the blame for Israel’s dire plight and ignominy on Elijah. And thus it has always been and no doubt will remain till the end of the age. The true prophets (who do not “speak the good” concerning the present situation as the four hundred prophets of Ahab’s court spoke the good, cf. I Kings 22, from the days of Abel and Noah even to our day have always been set upon as the disturbers of the peace.

On this note I must close, since space forbids further elucidation or condensation of the comments on the book. Machen’s claim to fame for God’s people must ever rest on the fact that he was a faithful prophet, who with Micaiah of old llIi1de this his motto: “As the Lord liveth, what the Lord saith unto me, that will I speak” (1 Kings 22:11). It is for this reason that I recommend this outstanding hook of 1954 to all ministers of the Gospel, evangelists and teachers, elders and deacons, and to every Christian who shares in the anointing of Christ and thus is called its a prophet to speak and to witness in this age of apostasy.

In dosing I cannot refrain from getting attention to one more outstanding feature of this excellent biography. I refer to the amazing fashion in which the author has captured and conveyed the spiritual ardor and cultural distinction of the home in which young Machen grew to manhood. If there was ever a Hannah in our modern times, who dedicated and loaned her child to the Lord all the days of his life, it certainly was Mrs. Arthur W. Machen, the mother of this man of God. Her spiritual power, intellectual zest and cultural refinement are reflected in every letter that it quoted as well as in the self-sacrificing life of her famous son. Machen was truly a walking epistle of the training he had received in the Holy Scriptures from babyhood. Like Timothy of old he had imbibed the knowledge of the Scriptures with his mother’s earliest care. But, in spite of this, there was never an outward, formal reliance on the external covenant relationship. Machen’s mother realized that one is saved by faith in the Lord Jesus. Christ and not by intellectual apprehension of the truth alone. Furthermore, few men have ever had it truer friend and sour s companion than this saintly mother proved to be in later life when the battles of life engulfed her son. Her understanding ;and confidence together with her prayers for and praise of her son spurred him on to noble duty. As a record of a mother’s love as reflected in her letters to her son busily engaged in the arena of life, this book is eminently worth reading.