I had been pondering this matter for some time. Out of curiosity I decided to ask that of some house guests who stopped by. When I asked the question, I got the most puzzled looks: “What is an imprecatory prayer?” Not a clue! I raised the same question to a later visitor. The same response: not a clue! These senior citizens, church members all their lives, had not heard the word imprecatory before. A totally new concept. 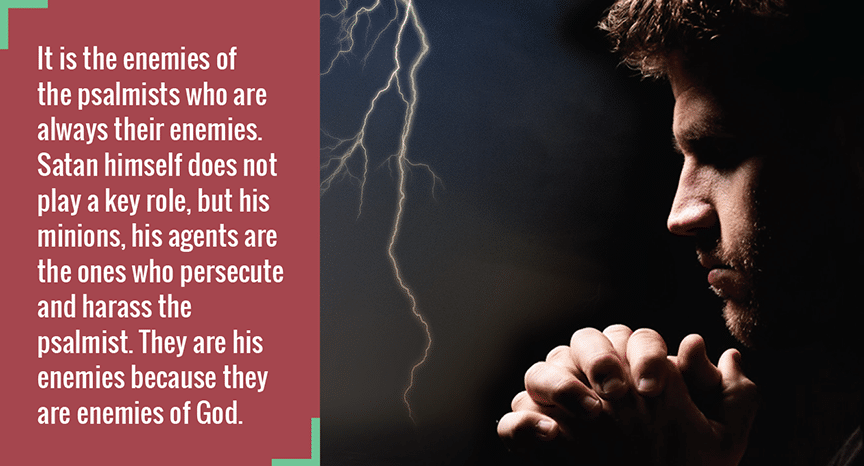 As a senior myself, I have to admit that I had not considered the matter until ten years ago. We were visiting a grandson in Knoxville, Tennessee, where he was doing graduate study. One Sunday evening we chose to attend a fairly large Southern Baptist church near campus. The parking lot was huge, but the crowd was small. After preliminaries, the pastor introduced his message: “Some of you know that I am becoming more comfortable with the Reformed faith. I know that bothers some here, but tonight I want to preach about ‘imprecatory prayers.’ I want to use Psalm 139 as my text.”

I listened carefully and later complimented him on a faithful exegesis of Scripture. This was new to me, even though I had been raised in a solid Bible-preaching church. Even my seminary training had not covered this matter. Ever since then I have read the Psalms with heightened interest.

Psalm 139 is a favorite of many pastors, especially in January when the abortion issue dominates many agendas. Psalm 139 is powerful testimony to the fact that our sovereign God is the source of every life and forms every little body during that gestation period. It is awesome. I marvel at the miracle of birth. As a pastor, I need to pray for every pregnancy in the congregation. I want to rejoice at every birth. Praise God!

But that is not the whole of Psalm 139 (English Standard Version). Read on:

Oh that you would slay the wicked, O God!

O men of blood, depart from me!

They speak against you with wicked intent;

Your enemies take your name in vain.

Do I not hate those who hate you, O Lord?

And do I not loathe those who rise up against you?

I hate them with complete hatred; I count them my enemies.

Search me, O God, and know my heart!

Try me and know my thoughts!

See if there be any grievous way in me,

And lead me in the way everlasting!

This is an imprecatory prayer. The psalmist is asking God to slay the wicked. He expresses genuine hatred for the enemies of God. Should he do that? Should he not just pray for their salvation?

If we read in other places, we find the psalmist demanding: “O God, break the teeth in their mouths; tear out the fangs of the young lions, O Lord! Let them vanish like water that runs away; when he aims his arrows, let them be blunted. Let them be like the snail that dissolves into slime, like the stillborn child who never sees the sun” (Ps. 58:6–8). An equally final plea appears later: “Let them be blotted out of the book of the living; let them not be enrolled among the righteous” (Ps. 69:28).

Should we as pastors preach on those parts of such psalms? Should we pray that kind of prayer? Should we preach a plea for repentance? The answer to the basic question should be a resounding yes. It should be required of us because it comes as a direct command from Jesus Christ himself. Listen to the second petition of the Lord’s Prayer: “Pray then like this: . . . ‘Your kingdom come, your will be done, on earth as it is in heaven’” (Matt. 6:9–10). Such a command may seem vague and leave us scratching our heads. What does that have to do with imprecatory prayers? Listen to the Heidelberg Catechism; it gives us great clarity:

A. “Thy kingdom come,” that is, rule us so by Thy Word and Spirit, that we may submit ourselves more and more to Thee; preserve and increase Thy church; destroy the works of the devil, and all violence which would exalt itself against Thee; and also, all wicked counsels devised against Thy holy Word; till the perfection of Thy kingdom take place, wherein Thou shalt be all in all.

The Larger Catechism gives us a similar command: “Pray that the kingdom of sin and Satan may be destroyed, the gospel promulgated throughout the world” (Westminster Larger Catechism, Q. 191).

What does that mean in our world today? How do we respond?

There is also the negative side, but that, I fear, has too often been ignored. We need to pray fervently that God would destroy the works of evil and the kingdom of Satan. We should ask God to shut down every abortion clinic in the world. We should ask God to wipe off the internet those porn sites that we can easily watch. We should plead with God to overrule all the hatred being generated against the church and against his Word. We should ask God for our national, state, and local leaders to honor his Word and promote freedom of religion. We should include houses of prostitution and gambling casinos. Evil and corruption are everywhere. There are no shortages.

As we become more familiar with the Psalms, we recognize that the antithesis is the dominant theme in almost every psalm. Starting with Psalm 1, we see the stark contrast between the righteous and the wicked. The righteous “is like a tree planted by streams of water.” The wicked “are like the chaff that the wind drives away.” The Lord is the one who protects and nourishes the righteous. It is the enemies of the psalmists who are always their enemies. Satan himself does not play a key role, but his minions, his agents are the ones who persecute and harass the psalmist. They are his enemies because they are enemies of God.

Frequently the psalmist will make declaratory statements about the way God is protecting him and providing for all his needs. In numerous places, though, he will petition God to punish, control, or destroy his enemies. He does not pretend or threaten that he himself can effect justice. He asks God to do that for his sake but also for the sake of all the righteous. God is the one who executes justice on the wicked.

The answer to our opening question should be a resounding, universal yes. The book of Psalms especially has numerous examples:

All of these are examples of imprecatory prayers. If we have read through the Psalms carefully, this should not surprise us. The Psalms are full of examples. When you read through the rest of the book, look for them and you will not be surprised. Many of these cited were written by David, a man after God’s own heart and a clear type of Jesus Christ.

We live in a time when fear dominates much of our culture. Millions and millions of people worldwide live in mortal fear. It is not fear of God or his sovereign power. It is fear of a virus that might attack our bodies. It is fear of state, county, and local government officials who pretend to make laws that control too much of our behavior. Some of those “executive orders” are patently absurd. Some of them are self-contradictory. Some of them are so nonsensical they make us scratch our heads.

How do we respond? Quietly comply? Silently seethe under our breath? Complain to our neighbors? Sing their praises because they are “saving us” from the pandemic?

None of the above. If we do nothing, we are condoning them. If we quietly comply, we become complicit with them. We should not be silent. We need to plead with God, the righteous Judge of the earth, to demonstrate his power. We need to petition him so that he would rain justice on the wicked. We need to avoid vague generalities, asking only for good to prosper. We need the courage to pray for specific justice against specific evil, just as David did in the Psalms.