In the May and September 1956 issues of Torch and Trumpet we attempted to answer some objections of readers in connection with the thesis that all schools, regardless of race, creed, or color, are entitled to their fair share of public school taxes in proportion to the number of students enrolled. Herewith we conclude these questions and answers.

A well-known educational leader writes: “We who live in a city may vote for a public park system although for private use we construct and maintain at considerable personal expense a private park in our own back yard. Again, we may vote for a public swimming beach while at the same time we procure a private beach for our private use at our own expense. In each of these cases there is double taxation. However…no injustice has been done…No one was forced to make both expenditures.” His conclusion is that no one forces us to have a Christian school, and therefore if we choose to have one we must foot the bill just as in the case of the private pack or beach.

Such reasoning would be cogent if it were true that “no one is forced to make both expenditures.” But the contrary is true. The Christian who realizes his responsibilities before God is obliged to give his children a Christian education. He has no other choice. He is forced by God’s commandment. It is not a matter of indifference. He must train them in the fear of the Lord. He is thus forced by his own conscience to pay for Christian education. 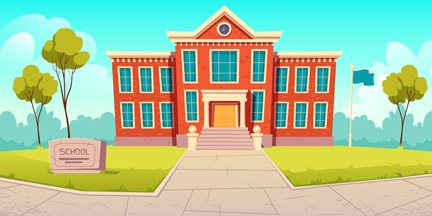 Then the state comes along and forces him to pay for the education of someone else’s child. It is law. It is required on penalty of imprisonment. Thus he is forced to make both expenditures.

This is why the illustration of the private parks and beaches carries no weight. Indeed, nobody is forced to pay for a private beach or park. That is a luxury. There is a freedom of choice whether to have them or not. They are not a necessity.

But this is not the case with the Christian school. It is not a luxury. It is not a matter of indifference. There is no freedom to have or not to have a Christian school. If it were a matter of private luxury and indifference, then this illustration would be very apt. But it is not. God demands that we have the school. Therefore we are forced to pay twice, once willingly for a Christian education and once unwillingly for a God-less education of somebody else’s child. And that is injustice.

If this principle of equality were to be worked out, exactly what system would you favor, aid to the school or aid to the pupil?

There are three possible ways of distributing the taxes fairly. One is by granting the money to the pupils who go to school, regardless of what school they choose. This fair method is followed by the G.I. Bill of Rights. The veterans themselves, and not the schools, are paid. Then the veteran can attend any school of his choosing as long as the school maintains certain standards.

A second method is to pay the money directly to the parents, who would then turn it over to the school.

A third way is to distribute taxes to each school in proportion to the number of students enrolled. This would be for all schools, without discrimination against them for their religious orientation, whether they be Calvinistic, Roman Catholic, or Judaistic. Personally, because the last method has been tried and proved successful. without any government interference and in an efficient manner, we would favor the latter. But any method is suitable that does away with the basic injustice.

Even if what you advocate is correct, could we ever convince the American public of this? Is there any hope of a change?

Let me say first that even if we thought there were no hope, it is still our duty and obligation to strive for what we believe is justice.

But I believe there is hope, although it could take many years. I base this on two observations. First, what we strive for is justice, and justice often triumphs. Secondly, the American people, both the Christian and non-Christian elements, have in the history of our nation shown a remarkable appreciation for this very cause we are struggling for. For it appeals to the American sense of fairness to all and to her pride in not discriminating against a person for his race, color, or creed.

For example, the annual convention of the CIO of Maryland in 1955 went on record in favor of our principle “in the interests of elementary justice.” In 1934 a bill to give aid to the private schools was defeated only by a narrow margin in the Ohio legislature. Mississippi granted free textbooks to all schools on the ground that a refusal to do so would be a denial of privileges on “sectarian” grounds. Four other states followed suit. F.D. Roosevelt’s Advisory Committee on Education in 1937–38 advocated free textbooks, transportation, and scholarships to all schools. Pres. Hutchins of the University of Chicago strongly defended this proposition after it was attacked.

It is short of amazing how many utterances in Supreme Court decisions and from informed people who are not particularly noted for their Christianity support this principle in part or in whole. Therefore, this cause is not a lost cause. With the cooperation of Evangelicals, Roman Catholics, and with an appeal to the American public’s sense of equity, something can be done.

What can you do? The first thing is to discuss and thereby arouse interest in many people. School boards, P.T.A’s, Men’s and Ladies’ Societies could discuss the pros and coos. Get speakers to introduce the subject. And keep at it, not cooling off after the first enthusiasm has passed by.

Further, speak and write to your local school boards but especially to the National Union of Christian Schools requesting action. For the latter is in a natural position to give leadership through its national and local conventions, its magazine which reaches school boards, teachers and influential people in education, and through other powerful means of influence.