The typical summertime calm of Dordt College’s campus was shattered on July 25 as 813 teens and sponsors flooded the beautiful grounds and overtook the dorms. Dordt College in Sioux Center, Iowa, was the host site for the 2011 Reformed Youth Services Convention, which took place from July 25 to July 29. After a year of preparation on the part of the tireless convention committee, led by Mr. Ed De Graaf, 625 high school students and 188 sponsors, staff, and speakers came together from across North America. These numbers set Convention records, as did an amazing representation by Trinity URC of Lethbridge, Alberta with fifty-nine participants! The stage was set for a record-breaking week!

Philippians 1:6 states, “ . . . being confident of this very thing, that He who began a good work in you will carry it on to completion until the day of Christ Jesus.” This verse provided the theme for the 2011 Convention: “Under Construction.” The two main speakers, Rev. Jason Tuinstra and Rev. Bob Van Manen, developed this theme each day in five main sessions held in Dordt’s chapel. The good-natured “rivalry” between these two men helped the students see them as real people, who were both at the convention out of a great love for the Lord and His people. Rev. Van Manen established himself as rightfully speaking at the convention due to his theme song, “Bob, the Builder.” Rev. Tuinstra respectfully played the age card, implying that his relative youthfulness gave him one up on Bob, the Builder. Rev. Van Manen came up for his session the next day shuffling with slippers behind a walker. The students relaxed during the genial banter, but were quickly able to switch gears when these two gifted speakers began their serious messages.

Rev. Tuinstra led the first main session based on Phil. 3: 1–11. He challenged conventioneers not to become accustomed to the disrepair of sin in our lives, but to see the great need for being under construction. Like Paul, we were told, we should never put confidence in our upbringing to save us, but rather we must recognize our desperate need for Christ and his righteousness.

Rev. Van Manen spoke in Tuesday’s main session, developing the theme one step further to the architect and foundation of our construction based on Phil. 1: 3–11. He emphasized that God, the great architect, has a beautiful design for our lives. Challenging us to consider the eternity of our foundation, he clearly set forth the necessity of building on the foundation that will never crumble—Jesus Christ.

In the third main meeting Rev. Tuinstra used Phil. 3: 17–21 to direct listeners to the importance of following the blueprint of the Word of God for our construction. He warned against following those who boast in their shame, pursuing the plans of the world rather than patterning their lives after Christ.

On Thursday, in the fourth session, Rev. Van Manen applied 1 Peter 2:4–10 to the next step, dealing with the construction building materials and tools. He helped us to realize that we are the materials and that Scripture tells us we are set apart as a royal priesthood. He also stated that the Holy Spirit builds us up in Christ, using godly parents, ministers, teachers, and friends to do this. The tools of prayer and the preaching of the Word are used to make us into a spiritual house, to build us into His church.

In the final session on Friday, Rev, Tuinstra wrapped up the theme, using Phil. 3:12–16. He directed us to the responsibility we have to press on to the goal and continue the construction process. No one will arrive in this lifetime, so we were cautioned not to get comfortable spiritually. Yet we have in part already what we long for in full in heaven. We are made holy in Christ already, so we should not look back longingly on our sin but strive onward to the goal in this life under construction.

Students also attended four workshops from the ten that were offered. These practical workshops were led by Rev. E. Tuininga, Rev. W. Oord, Rev. B. Nymeyer, Rev. J. De Boer, Rev. M. Schout, Rev. B. Boekestein, Rev. J. Lucero, Rev. K. Efflandt, Rev. D. Barnes and Rev. J. Veldman. Our youth were given much to think about by these men of the Word, in their working out of the question Rev. Tuinstra submitted, “How then shall we live?”

At some point each of the young men attended a workshop led by Rev. E. Marcusse about relationships entitled, “Yoked with a Goat?” The young women attended the female version of this with Mrs. D. Marcusse. These straightforward workshops helped the youth consider what God’s Word requires of them in a relationship. One useful item taught by the Marcusses was that when a young man first meets someone new, he should ask the key question, “Do you know the catechism?” If the response is, “Which one, Westminster or Heidelberg?” he should immediately take that young lady home over his shoulder; there would always be plenty of time to find out minor details like a name later on. Not surprisingly, students latched onto this question and it was overheard frequently on the campus throughout the remainder of the week. Watching the students meet new people and begin friendships was entertaining for some of us “older” attendees.

The main sessions and the workshops are definitely the backbone of the convention, but the variety of other activities during the free time kept the students engaged and connected them socially. A definite highlight of the convention for most people was the singing. Relating back to the idea of the already and the not yet, the mass singing gave us a beautiful taste of the perfection in worship that awaits us. Led by Mrs. Julie Bussis, Mr. Rip Pratt, and Mr. Brent Cooper, the students sang with enthusiasm and love for the Lord. There was also an opportunity to join a mass choir that only practiced twice for half an hour, but under the joyful direction of Mrs. Bussis performed the song, “No More Night” with great fervor at the talent show. The talent show featured much singing and other musical talent, as well as some well-received comedy acts!

Besides the singing, there was an incredible range of other activities for the youth. There were basketball, soccer, volleyball, bowling, and dodge ball tournaments. There were pick-up games of street hockey, if you could stand the heat, and an early morning five-kilometer run. For those not so athletically minded there were scavenger hunts, games, Minute to Win It, and Bible Jeopardy. Watching the minister’s edition of Bible Jeopardy consoled the other contestants with the fact that even ministers will freeze under pressure! The wonderful Sioux Center All Seasons Center across the road from Dordt gave students the opportunity to cool down in the pool at night. Mealtimes were spent enjoying great food with friends while also meeting new people. The first item on the agenda each morning and the last one every night was a smaller group Bible study. In the morning the groups were mixed from various churches, but at night the time was spent with your own church’s young people to discuss the main sessions and workshops. All of these activities kept the students entertained and tired enough to follow the lights-out policy!

Wednesday is the one day that is spent somewhat differently from the rest, as it is the Day Away. This year saw conventioneers traveling on buses to Sioux Falls, South Dakota to the Wild Water West water park. I felt a pang of sympathy as I saw the crestfallen faces of some families already in the park when all eight hundred of us poured out from what seemed like an infinite line of buses. However, this facility was able to handle a large group, and the students soon beat the heat in the wave pool and on the slides. More adventurous youth also pelted each other during paintball and raced the go-karts. Batting cages, mini-golf, and bumper boats were additional activities available. The Day Away was a huge success that added variety and fun to the week. 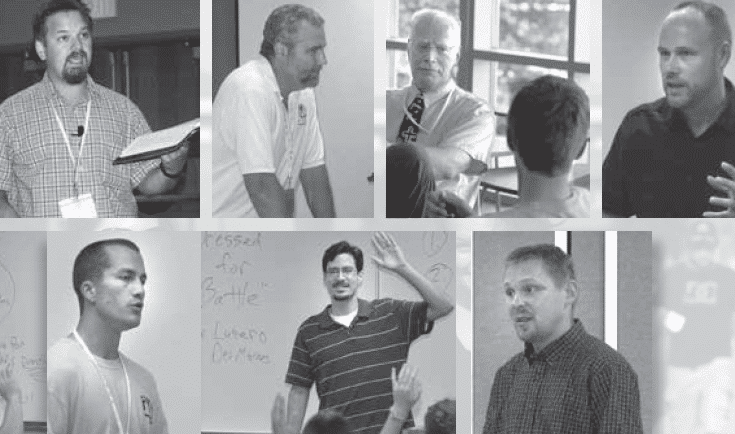 At the last session, the site of the next convention is revealed. Because there was one student from Hawaii present this year, the rumor among the optimistic students was that Hawaii would be a likely option. Google Earth was used to zoom in and out of various spots in North America until it finally came to rest at the next RYS Convention location. Whoever put together this video clip of Google Earth had it zoom in close to Hawaii and the air became palpably electric with excitement, until it cruelly zoomed back out again. However, these somewhat unrealistic students were not left disappointed as the final close-up took us to Covenant College on Lookout Mountain, Georgia. This scenic location has a lot to offer, and the thrill of anticipation for next year diminished the sadness of leaving Convention 2011.

The desire to turn back the hands of time and return to the days of one’s youth can be strong in many people. There were truly a few times during the RYS Convention week that I walked around the campus among all of the young people and was drawn back to the four years I spent at Dordt College as a student. Unfortunately, in the mornings the mirror reflected reality, reminding me that I was one of the “mature” sponsors. Nonetheless, the energy and excitement of the RYS week was contagious, and many of the adults were invigorated by the time spent there. To be able to share in this experience with the hundreds of high school students was a tremendous blessing. I heartily recommend that all of our churches continue to support the work of RYS and encourage their covenant youth to attend the conventions. All present at the 2011 RYS Convention clearly heard the message that we can be confident that God will finish the work He began in us as we move forward in this life under construction.

Mrs. Anne Konynenbelt was a sponsor to the 2011 RYS Convention. She is a member of the Trinity United Reformed Church in Lethbridge, Alberta and a teacher at Immanuel Christian High School.