If you have heard anything about the recent Reformed Youth Services convention at Dordt College, you will not be surprised when I say that I had a fantastic time being a part of it.

The RYS convention is not something to attend lightly. I personally had to endure a fourteen-hour bus ride from my home in Kalamazoo, Michigan, and many had to come farther. Once there, I was greeted by a tight schedule that mandated attendance for five main sessions (hour-long sermons) and five workshops (hour-long, classroom-style lectures). Most days, the schedule required me to get up before seven and wouldn’t let me stay up past twelve.

Sounds like something that your average teenager would avoid like the plague, doesn’t it? But we young people love it. The long trip just builds suspense for the convention itself. The sports, singing, and games made me so eager for each day that I usually rose before I had to, and often so exhausted me that at midnight, I willingly collapsed into bed. And as for the sessions and workshops, in many ways they were the greatest attraction at the event. 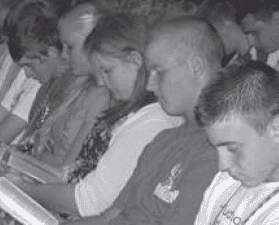 It is not just me saying this, either. This past convention, with over eight hundred guests, was the largest to date. This popularity owes much to the energy that goes into every part of convention. The speakers’ sincerity and passion is clear in every word that they speak, and the sheer joy and excitement that fills the faces of the music directors is impossibly infectious. Friendly supervisors and engaging youth leaders foster a welcoming atmosphere that makes it easy to relax. And as for administration, I can only imagine the enormous amount of work that must go into organizing such an event.

But the energy doesn’t stop with the adults. We, the youths of the church, feel it too, and respond in kind. I find it hard to convey the convention experience to those not familiar with it. Often, I found myself on the edge of my seat during most of the workshops, hanging on every word they spoke. The sound of eight hundred young people singing “Holy, Holy, Holy” sent shivers up my spine. Though my volleyball team was destroyed in the first round of elimination, we came away from that match laughing and cheering. Everyone is committed to learning about God and having a good time, and it certainly shows.

Of course, I can only speak for me and my group. Doubtless some were miserable, and doubtless some passed the whole week without learning a single thing about God, and those people have my pity. But as for me, I truly felt the Spirit’s work at RYS, and my only regret is that I, as a senior, will not be able to return next year. For all others, I would urge them to go while they still can.

Neil Kloosterman recently graduated from Reformed Heritage Christian School in Kalamazoo, Michigan and will be attending Grove City College in Pennsylvania this fall. He is a member of Covenant United Reformed Church in Kalamazoo.