Let us look together at the relevance of Easter. 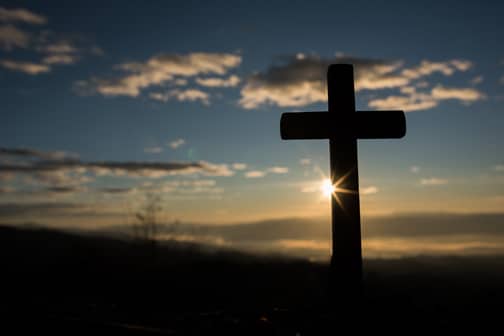 OUR UNION WITH CHRIST

The Apostle Paul is working out a comparison in Ephesians 2:6 between what happened to Christ in His resurrection and what happens to believers spiritually.

What happened to our Lord? He bore our sins in His body on the cross; He died and His lifeless body was buried in the tomb. He was in the grave three days. He had committed His soul to His Father. But on the third day He arose, He literally came out of the grave, but left His grave-cloths behind. It actually occurred. The Evangelists describe it in minute detail. He arose. He entered a different realm. For forty days He appeared to a number of people who didn’t expect Him to arise and were startled to see Him. He who was dead is alive. The fact of the resurrection is a solidly substantiated fact as Luke says in Acts 1:3: “After His suffering, He showed Himself to these men and gave many convincing proofs that He was alive.”

Now Paul tells us that what happened to Christ, happens to us. Our salvation is comparable to Christ’s resurrection and nothing less than that! There was a complete change in the realm of our Lord’s existence. He was dead in the grave and now He is alive in a new way. This is true of a Christian. We have been raised together with Christ. Because of our union with Him, what happened to Him happened to us, not in the physical sense, but in the spiritual sense. (It will happen in the physical sense too, but later, when Christ returns.) But now the very same power which raised Jesus is working in us who believe. What does this tell us about ourselves?

Negatively, it tells us that we are no longer spiritually dead. We were all dead in trespasses and sins. We were in a spiritual grave. But by God’s grace we have come out of that grave. We are no longer in that realm. We are a new creation.

Salvation is the most profound change in the world. It is the difference between life and death. This means we are no longer under the wrath of God and no longer under condemnation.Because Christ arose, we are forgiven. We receive this by faith. Today is the day of resurrection. If you do not know the Lord as your Savior, today is the day He is calling you to follow Him. Confess your sins, repent and believe in Jesus Christ who was crucified for our sins and who arose again for our justification.

Furthermore, because we have been risen with Christ we are now dead to sin. Before we became Christians we were dead in sin, but as Christians this is no longer true. Before we were under the power of sin, in the realm of sin, under its dominion, controlled by lust, governed by the passions of the flesh and of the mind. This is no longer true for the child of God.We who have been raised with Christ are dead to that realm of sin. We’ve been taken out of it. Sin shall not have dominion over you, says the Apostle Paul in Romans 6:14. The child of God does not spend his time there, doesn’t walk there, doesn’t belong to that realm. The child of God is a new creation, a new man because he has been raised with Christ.

Consider the positive relevance of the resurrection.

Having been raised together with Christ, we are ALIVE UNTO GOD. Before I was not. I was dead to God. This is the terrible tragedy of everyone who is not a child of God. He is living as if there were no God. He is not conscious of God. He has no having relationship with God. Being raised with Christ, we are alive unto God. We have an entirely new attitude toward God. We are no longer enemies but friends of God. We desire God. We love Him and want to be near Him. We don’t try to hide from God like Adam did. The natural man does everything he can to avoid God. Not so the child of God. We sing: “As a deer panteth for the waters, so my soul panteth after thee. O God, my soul thirsteth after God, the living God.” What a change! It is the change from death to life. Is there a bigger change in all the world? Now I desire the very One I feared. Can you honestly say that this is your desire? Is it your desire to know Him better? To realize and experience His presence?

But we are not only alive unto God, we also walk in NEWNESS OF LIFE. The child of God who was raised with Christ is living an entirely new life; he is governed by a new perspective. He has a new mind, a new heart and a new will.

What is the new mind? Paul tells us in Romans 12:2: “Be not conformed to this world but be transformed by the renewing of your mind.” The child of God looks at things differently. He doesn’t look at things simply in terms of time, but also of eternity. What a difference this makes. He not only thinks in terms of the body and the mind, but now also in terms of the soul and the Spirit. He is conscious that he belongs to another realm. He judges everything in the light of this. He has a new standard of values. Because he is a new person, he sees the Bible as the unique revelation of God to man. The Bible is the final answer to the issues and problems of life. He stops to think. He thinks about himself, his God, eternity, the Spirit. He has a new mind.The natural man does not do this.

The child of God also has a new heart. He has new desires. “Blessed are they that do hunger and thirst after righteousness for they shall be filled.” The child of God’s greatest desire is now not for more pleasure and satisfaction for the moment; it is for righteousness and holiness. David prayed: “Create in me a clean heart O God, and renew a right spirit within me” (Psalm 51:10). The child of God wants to be pure, holy, righteous, and he grieves when he falls. He sees sin differently too. It is not simply an offense against the law; it is an offense against the love of God. He has a desire for prayer and fellowship With God and with the saints of God. “We know we have passed from death to life because we love the brethren” (I John 3:14). He also has a real concern for the lost. He cares. He wants more than anything else that they come to know Jesus Christ. This is a changed heart.

The child of God also has a new will. He is determined to do the will of God. He wants to conform his life to the law of God. I was at a Dad, the Family Shepherd conference recently. We saw that “father power” is a God given ability that we as fathers were given to shape our children’s lives for good or for evil. The key to effectiveness is to build on the foundation of the Word of God. The purpose of “father power” is to transfer God’s truth down through the generations. We as fathers are transmitters; our children are the receivers. This requires a commitment. The resurrection power of Christ must empower us to use our “father power” for the glory of God and the coming of the kingdom.

So on this Easter Sunday, let us ask ourselves: “Have I been raised together with Christ? Am I alive unto God and am I walking in newness of life?”