Once when I was about nine, I insisted on accompanying my parents to hear a Dutch professor speak. He was to lecture on the last things. All I really wanted was to escape an early bedtime.

After appropriate devotions and an introduction the professor began to speak. Well do I remember his opening words. “Have you heard the news? The devil is dead!” Promptly with a peppermint in my mouth I fell sound asleep. After all, I could feel completely safe.

The speaker, of course, made abundantly clear that the devil was by no means dead despite what many were saying so glibly. Satan is alive, very much alive and always active in our world. Believers need to take this seriously. Repeatedly the Bible reminds us of him and his nefarious activities. John now instructs us about some of this. 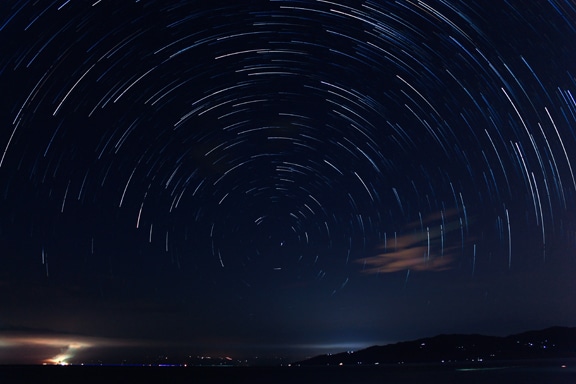 Notice how the fifth and sixth trumpets are distinguished from the first four. While the latter emphasize many of the physical results of Christ controlling the earth and its dwellers, here we learn what their “spiritual” consequences are. Whether these are already present to some degree or still await a future date is not indicated. But the devastating effect is sketched in frightening colors. Although Christians do not “read the signs of the times” in the same way, all are challenged to be alert. This first “woe” announces the coming of “locusts” whose poisonous sting will inflict unbearable torment on people.

Delving into these verses—the details are too many to allow full explanation—we learn that these locusts arise out of a dense “smoke.” But before they come, several important actions have taken place.

“A star,” symbol of great strength and influence, has already “fallen from heaven.” Comparing Scrip~ture with Scripture this can only be Satan. He is a personage; not some impersonal evil power. Jesus, you will remember, saw him falling as lightning from heaven (Luke 10: 18). Chapter 12 will elaborate on this. He is “the prince of demons” (Mark 3:22). He is also called “the prince of the powers of the air” (Eph. 2:2). Our Lord said that he is “the father of lies and a murderer from the beginning” (John 8:44).

Everywhere and always he challenges God’s rule over the created order. Thus he brings destruction (“Abaddon,” in Hebrew) and is himself a destroyer (“Apolyon,” in Greek). At times he disguises himself as “an angel of light” (2 Cor. 11:14) and then again goes about like “a roaring lion” (I Pet. 5:8). Fallen as he is from a high estate, he nonetheless retains all his angelic powers.

At the same time he is a creature; therefore always under divine controL Of himself he cannot so much as move. Thus also to engage in what John now “sees,” he will have to be “given” a key before he can set his demonic associates loose to do their work. Christ Jesus alone, so we learned earlier, has “the keys of death and Hades” (1:18). Now this key is said to be placed in the hands of the fallen “star” and for one purpose only. With it he unlocks “the shaft of the Abyss.” This is the place where those hellish beings are held in temporary detention (Jude vs. 9) until finally they will be cast into “the lake of fire” from which none can escape.

“Smoke,” so John writes, comes pouring out from those infernal depths, so dense and nauseous that it is impenetrable to the human eye. We know about it only because it has been revealed to the apostle. And out of it arise “locusts” to plague the human race.

The locusts are described here in great detail. So out of the ordinary, at points even grotesque, is the picture that this should be permanently fixed in our minds. Like Satan himself they are alive and exceedingly active.

They look like “horses prepared for battle.” They are also “crowned” to indicate a kind of power by which they rule. Intelligent and cunning, they are said to have “faces”; also attractive with “hair” to suggest the power of seduction. But their “teeth” can cut and gnaw. Armed with “breastplates,” they appear to be invincible and indestructible. In no way are they like ordinary locusts, for the poison is in their “tail.”

All proceed in “order” with a “king” at their head. He gives the orders. They may not kill people but only “torment” them. Nor may they, like locusts which often devastated Israel’s fields and vines, harm the green grass and the trees. But the plague which they spread is both terrible and terrifying.

Reading this again and again, we realize that these are by no means the usual armies which invade and conquer nations. Hence to regard them as the Parthians who vexed Rome’s boundaries in John’s day or the Muslims who subdued many once Christian countries within a century of the death of their prophet is without warrant. There is something far more widespread and threatening in the appearance and activity of this army.

Arising out of hell’s smoke, they are a host of demons let loose to inflict agonizing pain on a portion of humanity. We need not think here of all the demons. Within their ranks. like those of the angels in the heavenly regions. there are differences of position. power and even purpose. Some, according to the Bible, wander about in desert places. Others as in Jesus’ day took possession of individuals in a kind of imitation of our Lord’s incarnation. Later we will hear about four such beings held at the river Euphrates. But this host has received orders to “torture” those who “did not have the seal of God.” What a consolation for the godly in every generation who cannot be so afflicted. These locusts are also busy for “five months,” a long but by no means interminable period. Their plague will not last as long as the 1260 days or the 42 months. But the “agony” which they cause is as excruciating as only those who have suffered the sting of a sizable scorpion know. And because the sting is in the tail. they can and do strike unexpectedly.

Dramatically is this described by the apostle for us.

All those who are stung “will seek death.” By cunning and cruelty the locusts have injected their poison. Those afflicted are unbelievers who. rejecting God’s truth, lay themselves wide open to seduction by way of lies. For this poison there is no remedy; from its pain there is no escape until the deadly work is done. This, however, they have heaped upon themselves by their unbelief and ungodliness. While longing for release. they are condemned to a spirit of pessimism which will overtake them until the cup of their iniquity is filled to overflowing. Then they will die to enter a suffering far more painful and permanent than what the locusts inflicted.

But what is that “poison” which produces such agonies?

Since the fifth and sixth trumpets are so closely connected, we are convinced that the answer is found in the last verses of this chapter. So thoroughly steeped in their sins are these folk that the divine judgments hurled from heaven upon the earth do not arouse them to any true and godly repentance.

They have sold themselves under sin. They continue to reject Jesus and the message of His salvation. They are “idolaters,” worshiping themselves and the gods of this present age. They are murderers of themselves and of others. They practice sorcery, witchcraft and other magical arts. They have opened their ears, their minds and their souls to sinful propaganda of every kind while indulging in sexual immoralities. They have given heed to false doctrines, philosophies and ideologies. Now they begin to feel the consequences of the lifestyle which they have chosen. As God’s children are open to the beneficent influences of the Holy Spirit, these people have made themselves prey to Satan and every kind of devilish seduction.

This, in principle, is the kind of world in which we and our children are living.

Sin has become increasingly more blatant and blasphemous as the centuries, since our Lord’s ascension, pass. Nor can we expect any decisive improvement in religion and public morals among people who openly reject the claims of the Lord Jesus Christ. They do not want salvation by God’s grace. Indeed, we are to preach the gospel to one and all, since we never know precisely who have the “seal” of belonging to God. Especially Christ-like compassion for those who have never yet been confronted with the living Word should fill our hearts. But those who steep themselves so deeply in sin by turning away from the one true God remain fully responsible. In no way is God to be “blamed” when they suffer the consequences of their own choice.

When this plague will fall upon such people is not stated by John. Very likely its beginnings have been in the world for a long time. Today they seem even more evident than before. And this can and will only increase, until it reaches its climax in the days of the antichrist immediately prior to the blessed return of the Savior-King. Soon we will be learning more about that period. At the same time, let all who have received salvation according to the Scriptures rejoice that this “sting” with all its painful resuIts cannot harm them. They and they alone are kept safe for time and eternity.

1. How would you explain that many Christians do not take Satan and his devils very seriously? Are preachers also to blame for this?

2. Has Christ revealed this scene to make us fearfuI?

3. How clear is Scripture on hell as a definite place somewhere in the created order?

4. In what sense and to what degree is Satan called “the prince of this world”?

5. Should it make us easy-going to know that Satan cannot really harm us in this way?

6. What objections can you raise against identifying these locusts with the Parthians or the Muslims?

7. Which characteristics of sin as “poison” can you find here? What kinds of “pain” will false doctrine and sinful conduct inflict on people even now?

8. Can you somewhat explain “demon possession” and its distress in Jesus’ day?

9. Explain Ephesians 6:10, as to what it teaches about Satan and his hosts. Can you find similar texts?

10. With all today’s poisonous propaganda, do you think the “shaft of the Abyss” has been opened already? Are Christians in any danger here?