Synod London 2010 made for long days and short nights. Synod began Monday evening with a worship service and prayer for Synod, which was over by 9:30. Breakfast began at 6:45 each morning and the morning sessions at 8:00. On Monday and Tuesday evenings we convened until 10:00 p.m., on Thursday evening until 11:30, and Synod concluded Friday evening at 11:15 p.m.

Synod was represented by one-hundred-eighty delegates from ninety-eight churches. Four churches that have joined since the last Synod were ratified to officially become churches of our federation. They were: Covenant Reformed Church of Carbondale, PA; First United Reformed Church of Oak Lawn, IL; Redeemer Reformation Church of Regina, SK; and Trinity United Reformed Church of Visalia, CA. There were additional fraternal delegates from nineteen Reformed denominations with whom we have ecumenical relations, who were given ten minutes each to address Synod. Some of these traveled thirty-five hours to be with us and were from places as far away as the Congo, South Africa, New Zeeland, Scotland, and Indonesia. Church planters present also were given five minutes to talk about their work. The singing in all our opening and closing devotions by over two hundred men was most inspirational, to say the least. Synod was held on the large campus of the University of Western Ontario in London, Ontario, convened by the Cornerstone URC of London. We ate our meals in the dorm building, where the committee meetings were also held. There was about a three-quarter mile walk from the dorms to the auditorium where the plenary sessions were held, which we walked several times each day.

Most of the first two days were spent on committee work. Most delegates were assigned to committees, with late registrants given the option of which committee they would serve.

Each church was given three copies of the proposed songbook, containing only the hymn selections at this time, with the psalms yet to be added. Consistories are to review the proposed hymns and request changes by way of overtures to the next Synod. Some concern was raised over wording, “that the song book will be purchased and used by all URCNA churches.” The Liturgical Forms Committee had submitted its completed forms for the new songbook at the last Synod and encouraged churches to utilize them and continue giving feedback to the committee while they continue working on the remainder of the forms.

A change in Church Order was adopted, that any change needing ratification will take effect after it has been ratified by the churches rather than after the next Synod. Another change in Church Order was adopted which makes clear the method of receiving a church and its minister into the federation. These changes must now be ratified by two-thirds of the churches before taking effect.

Synod urged all office-bearers to repudiate Federal Vision teachings where they are not in harmony with the Three Forms of Unity. This was affirmed without dissent along with a list of fifteen teachings from Scripture and the Three Forms of Unity regarding Federal Vision and Justification. An appeal that Synod 2007 erred on procedural grounds in the way it adopted the nine rejections of error on Federal Vision, and to declare that action null and void, failed, but not without dissent.

A study committee was appointed to evaluate the need for a part/full-time or volunteer missions coordinator, as well as a committee to provide advice on the membership status of retired ministers. The study committee’s recommendations on doctrinal commitment for church membership were sent back to the committee for refinement. A procedure was adopted for voting on ministerial examinations held at classes. Regulations for Synodical Procedure were also adopted in order to ensure that the business of Synod is transacted in an orderly way.

We call ourselves United Reformed, but it is quite clear that on organic union with the Canadian Reformed Church, we are not united, but divided, it appears almost in half. There are so many things interrelated on the proposed merger and our phases of ecumenicity, that heated discussion continually crept up, and a close vote requiring a show of hands indicated the division of almost one-half split existing. It seems that we are so intent on unity with others that we are dividing our own family in the process. We are selecting stages of ecumenical relations with nine churches which are a part, along with us, of NAPARC (North American Presbyterian and Reformed Churches) as well as a host of foreign Reformed sister churches. 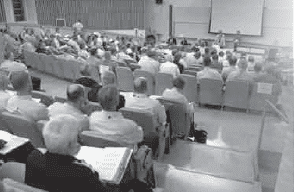 The federation’s budget was increased from $55,775 to $58,243, a $2,468 increase, for a total of $10.53 per family, which remains just under $300 per church if all churches contribute. By percentage of churches, the U.S. share is 65% and the Canadian share is 35%. Synod meetings expenses are not a part of this budget; rather each church pays per delegate based on expenses anticipated for that individual Synod.

The next Synod is scheduled in two years instead of three as has been done in our more recent history, and will be held in eastern U.S and convened by the Reformed Bible Church of Pompton Plains, New Jersey. The new stated clerk of our federation is Rev. Brad Nymeyer of Sioux Center, Iowa, and the newly appointed webmaster is Gary Fisher of Classis Michigan.

It was a very taxing but rewarding week, and we trust that our feeble efforts also can be used in building up the church and in keeping her faithful to our Lord, who is the head of the church. May He add His blessing to what was accomplished during that week.

Myron Rau is an elder at the Covenant United Reformed Church in Kalamazoo, Michigan. He was a delegate to the 2010 URCNA Synod.