The Young Peoples’ Point of View

The RYS Summer convention crew picked an absolutely spectacular place for convention this year: Concordia University, California. It was a wonderful time for spiritual growth and fellowship with friends! There were many excellent speakers who taught us more about God’s Word and gave us many good lessons that we can definitely apply to our lives. The two main session speakers this year were Pastor Phil Vos, from Escondido URC, CA and Pastor Paul Murphy, of Messiah’s Reformed Fellowship, New York. They both did a very good job at bringing out the theme for this year: “Rooted in Christ.” 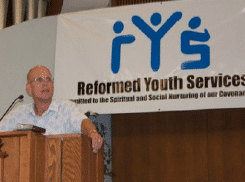 Rev. Vos told us about how roots do not look great and are usually unnoticed. A tree’s roots, however, grow as deep as the tree is tall.

We are to have our roots deep in Christ and in His Word. Rev. Murphy spoke about taking up our cross (dying to our old nature daily), denying ourselves, and following Christ. He also said that before mirrors were invented, people could not see themselves. God made us to look out of ourselves at others first.

A really good workshop called “Fatal Addiction,” by Rev. Jeff Doll. He told us how deadly addiction to alcohol and drugs can be, by sharing with us about his father who was addicted to alcohol. Rev. Doll also encouraged the young men not to be ashamed of being godly young men. He told the young ladies not to believe the world’s lie that staying at home is second class because there is no higher calling than being a mother.

Other workshops included “Why Should You Pray and Read the Bible,” led by Rev. Mike Brown of the Christ URC in Santee, California; “Daughters of Sarah,” a girls only workshop led by Mrs. Julie Murphy of Brooklyn, New York; “Jesus the Anointed Will Build His Church,” led by missionary Rev. Bill Green from Costa Rica; “Matchmaker, Matchmaker, Make Me a Match!” led, not by Tevye, but by Rev.Rich Kuiken of the Reformed Bible Church in Pompton Plains, New Jersey; “Zip-A-Dee-Doo-Dah???” a workshop with a catchy title by Mid-America Reformed Seminary graduate, Mr. Jeremy Veldman; “Living as a Proverbs 31 Man,” a guys only workshop led by Rev. Jason Tuinstra of the Emmanuel URC in Lamoore, California; “Dare to be Different,” led by Rev. Chris Gordon of the Lynden Washington URC; “Counseling Christ,” led by the Pastor of Youth and Family at New Life Presbyterian Church, Mr. Rip Pratt; and “Eden’s Tree in Iraq,” led by Rev. Tyler Wagenmaker of the Beaver Dam, Michigan CRC who has served as a chaplain in Iraq.

We also had a wonderful time getting to know old friends better and making new ones! The people you room with are usually from a different state. It is very interesting to find out what life is like for them. Every morning we had Son-rise groups where we would meet with others for our morning devotions. These are groups of two leaders and about seven or eight girls (or guys), each from different churches. This was also a neat way to get to know others.

Every evening, for night time devotions, we had Son-set groups made up of our own church leaders and young people. There were many fun sports tournaments, including: volleyball, basketball, and soccer. They had dodge ball and a couple scavenger hunts for those not interested in sports. You could also play your own games during free time if that is what you were more inclined to do.

Thursday was the “day away.” This year it was at Sea World in San Diego. It was SO much fun! Even the two and a half hour, cramped bus ride turned into many laughs and cheers as we tried to get our bus driver to pass all the other buses . The trip was beautiful and Sea World was great. There were lots of fun rides and many animals to see. We sat in the “soak zone” for the Shamu show and we never became completely dry again until

We had many creative people putting this convention together. It was a great experience! We would encourage every young person to go if given have the opportunity. Next year the convention is planned to be at Bethel University in St. Paul, Minnesota. We will definitely try to come back.

The Sponsors’ Point of View

It is an awesome sight and feeling when you have over six hundred young people and sponsors lifting up their voices in praise to the Lord. Pulling from Revelation 5:9–10 and chapter 7:9–10 “…singing ‘Salvation belongs to our God, who sits on the throne and to the Lamb!’”

The overall mission statement for Reformed Youth Services, which began in 1996, is: “Committed to the spiritual and social nurturing of our covenant youth.” I also like their earlier one: “Ministering the timeless truths of the historic Reformed faith to today’s youth.” This is very evident throughout the entire year. We receive newsletters about retreats and workshops coming up. When we receive the summer convention information in January, there is a tangible excitement in our youth group. All would love to go, and hope to be able to.

This year’s theme for the summer convention was “Rooted In Christ” with the verse taken from Jeremiah 17:7–8: “But blessed is the man who trusts in the Lord, and whose hope is the Lord. For he shall be like a tree planted by the waters, which spread out its roots by the river, and will not fear when heat comes; but its leaf will be green, and will not be anxious in the year of drought, nor will cease from yielding fruit.”

The conventions are organized by a committee. From the beginning of registration to the final farewell of the week, each convention runs like clockwork (at least, it looks that way). These members are constantly on the go making sure everything runs smoothly. They watch over the workshops, main sessions, music, food, housing, and so much more.

To Parents: what spiritual goals do you have for your young teenager? To Sponsors: what are the spiritual goals for your youth groups? Where can our youth go to meet with other young people of like-minded faith? Where can our youth go to gather with other Christian young people from all over the United States, Canada, and the world to broaden their horizons as to what God is doing in other areas–not just their own lives and families?

We live in a culture that idolizes self-absorption. To come apart from that for just one week during the summer, and a weekend during the school year, to study God’s Word and grow deeper in our faith is such an important thing to do. Though we chaperoned our youth to these events, we also learned a lot and were convicted just as much, if not more, to what the Lord calls us to be and do.

Get involved with RYS! Statistics have shown that a large percentage of our youth, once finished with four years of college, do not continue in the faith. We know and have studied the sovereignty of God, but we also have the blessed responsibility to pass on the faith to our children and youth. We are to train them and encourage them to come alongside us and work in Christ’s Kingdom. RYS does a great job in helping us do that.